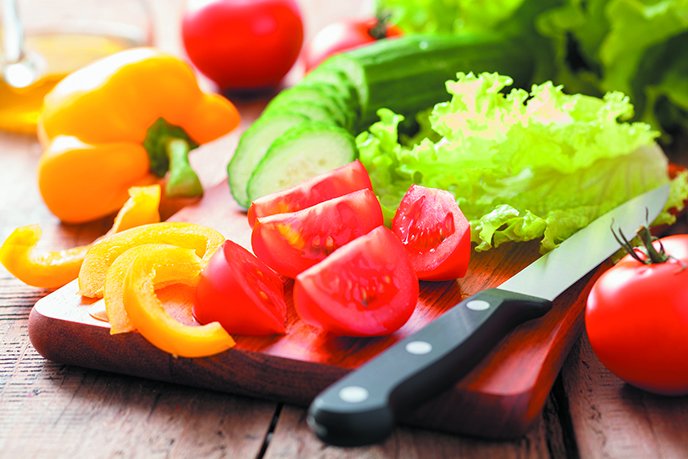 Tufts’ Roberts suggests these strategies to help keep appetite and cravings in check:

1. Stick to regular meal and snack times. Your stomach comes to expect food at certain times. Grazing all day long teaches you to crave a continual supply of food.

4. Replace mild-flavored foods with strong flavors. It’s generally easier to get your fill of strong flavors (such as spicy foods) faster than mild ones.

5. Slow down. If you eat fast and take big bites, you won’t have time to enjoy the aroma, flavor and texture of food needed to help you feel satisfied.

6. Know your trigger foods. If certain foods cause you to lose control of your eating, keep them out of the house or at least hidden from sight.

7. Control variety. The greater the variety of foods available, the more we tend to eat (like at a buffet). Limit the different high-calorie foods you keep on hand (such as buying only one kind of cookie), but stock up on many different non-starchy veggies.

8. Make a tempting food inedible in your mind. For example, imagine that the baker accidentally put chili powder in the cinnamon rolls.

9. Distract yourself. Push a craving out of your short-term memory by doing something else. There’s limited space in our short-term memory, so it’s easier to crowd out thoughts than you might think. Try calling someone, doing a puzzle, going for a walk, drinking water or chewing sugar-free gum.

10. Get enough sleep (generally 7 to 8 hours). Falling short on sleep can result in decreased levels of some gut hormones that help suppress appetite.

Taming Appetites on a Diet

It’s all too common for people to go on weight loss diets but give up because their appetite is surging. Sadly, many people regain much of the weight they’ve worked so hard to lose. It may not be due to weak willpower, though. Rather, your body may be producing powerful signals to tell you to eat. How you go about weight loss could make an important difference.

“A moderate reduction in calories, such as a 1,200-calorie diet, and gradual weight loss generally work much better than a crash diet,” says Susan B. Roberts, PhD, director of Tufts’ HNRCA Energy Metabolism Laboratory. “If you cut too many calories, there’s nothing you can do to control the hunger – it’s just too big of an energy deficit. If you are hungry, you will crave high-calorie foods. When you give in and eat them, that encourages future cravings.”

It’s also important to consider what and how you’re eating. “In our weight loss programs we teach people how to manage hunger, and we use carefully designed menus and recipes that are high in fiber, provide a good volume of food and contain an appropriate balance of nutrients, including protein,” Roberts says. “Our group has the only studies published showing that our weight loss participants are less hungry when they’re losing weight than they previously were when they were gaining weight.”

So, it is possible to tame your appetite. But, if you approach weight loss by trying to eat all of the same foods you’ve always eaten – just less of them – you’ll likely have limited success, especially long term.

In general, foods with more ﬁber, a higher water content, more protein, stronger ﬂavors and/or that are less processed and require more chewing tend to be more satisfying. Try these simple swaps:

Whole raspberries instead of a raspberry smoothie

Fresh apricots instead of dried apricots

Whole orange instead of orange juice

Quinoa salad instead of pasta salad

Legumes (beans) instead of potatoes

Whole apple instead of applesauce

If someone secretly snuck calories out of your body without your knowledge, do you think you’d be successful losing weight? After all, you wouldn’t even be aware you were on a diet per se. New research recently published in the journal Obesity suggests you’d still struggle with appetite.

In a one-year trial, 242 overweight or obese men and women with type 2 diabetes (average age, 55) were given either canagliflozin (a diabetes drug used to help lower blood glucose) or a placebo. Canagliflozin causes the body to excrete about 360 calories’ worth of glucose (sugar) daily in urine. Neither group was asked to change their diet or exercise habits.

After one year, the placebo group had lost about 2 pounds while those taking canagliflozin had lost about 7 pounds, which is much less than expected, had they eaten the same amount as the placebo group. Kevin D. Hall, PhD, a weight loss researcher from the National Institutes of Health and a coauthor of the study, used an equation developed in his lab to determine why. He figured out that people receiving the diabetes pill causing weight loss had an increase in appetite. They were eating about 100 calories more per day than usual for about every 2 pounds weight loss.

“This is the first time anyone has been able to quantify how strongly the body responds to weight loss by increasing appetite,” Hall says. Although groundbreaking, keep in mind that these people weren’t instructed to reduce calories or to use specific behavioral strategies or dietary approaches to control appetite.

“The study wasn’t designed to determine what happens if you completely change your diet to something dramatically different. For example, what if the group had switched to an unprocessed diet full of whole foods and all of their meals were prepared at home? Perhaps the improved quality of their diet would decrease the appetite changes we observed,” Hall says. “Also, there are a variety of hunger-related hormones that are changing in the body as people lose weight,” Hall says. “In future research we can look at how hormone changes happen in conjunction with appetite changes.”

Other research already suggests diet quality could make an important difference in improving levels of hunger-related hormones and in managing appetite.

The Quality of Your Diet Counts

“In the past, too much emphasis has been put on the quantity of food in weight loss diets,” says Frank Hu, MD, PhD, a professor and chair of the department of nutrition at Harvard T.H. Chan School of Public Health in Boston. “The message was that if you ate less, you’d reach a healthy weight. However, in the past five to 10 years, there has been increasing evidence that the quality of your food choices can influence how much you eat and therefore your body weight.”

“It appears your dietary pattern can influence how much of certain hormones are produced by adipose tissue,” Hu says. Research that he and his colleagues recently published in The Journal of Nutrition shows this association. At two time points over a 13-year time span, they measured appetite-related hormones and dietary quality of 838 women (average age, 45 at the study start). Dietary quality was evaluated using a questionnaire and the Alternative Healthy Eating Index (AHEI-2010), which considers dietary factors associated with chronic disease risk. A better score is awarded for:

Hu’s team found that improvement in diet quality over time was associated with better levels of hormones involved in communication between adipose tissue and the brain. These include leptin and adiponectin, which affect appetite and chronic disease risk. The association held true after adjusting for other variables (age, weight change, BMI and physical activity).

Leptinis produced by fat cells and helps regulate appetite and calorie burn (metabolism). “When people become overweight or obese, they produce too much leptin, which leads the brain to become resistant to leptin’s appetite-suppressing effects,” Hu says. That resistance can result in more hunger and slower metabolism.

Hu’s team observed that the more the women improved their diet quality over time, the less their leptin levels increased (13% versus 42% increase, comparing those with the most versus least dietary improvements), potentially helping delay leptin resistance that worsens with age.

In addition to following a healthy, high-quality dietary pattern, simple behavioral strategies can aid appetite control. “Sometimes you get cravings not because you’re hungry but because you get triggered by a food,” Tufts’ Roberts says. “However, to say that you’re not hungry isn’t quite accurate. When you’re triggered, real biological signals of hunger develop. The cravings can actually make you hungry.” She explains that when we’re triggered by the sight or smell of food, several things happen:

– Stomach muscles relax, creating space for food, and stomach contractions speed up to move food through the gut.

These effects are only temporary if you don’t actually eat the food, but they could make it challenging to stick to your eating plan when they happen. Roberts advises using strategies to avoid triggering such cravings in the first place. For example, if you’re eyeing the pastries while you’re in line at the coffee shop, by the time you get to the front of the line, cravings have been triggered by the sight of the sugary treats. Instead, divert your gaze from tempting foods and beverages.

So, put into practice what the experts have learned: opt for nutritious foods and use savvy behaviors to control appetite.

To learn more:The Journal of Nutrition, May 2016