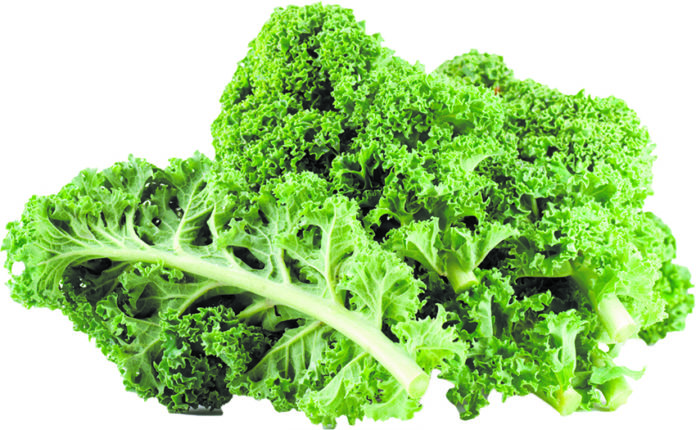 Kale may well be the it vegetable of the moment, celebrated in everything from cooking magazines to health websites. But unlike some food fads, this nutritious leafy green deserves the attention its suddenly getting: With a mere 36 calories, one cup of kale delivers five grams of fiber, 200% of your daily vitamin C, 180% of vitamin A and 40% of magnesium. Its packed with at least 45 antioxidant flavonoids. Like its cruciferous-vegetable kin, including broccoli and cauliflower, it contains glucosinolates- sulfur compounds associated with reduced risk of cancer.

But where kale really shines is its content of the important yet often-overlooked vitamin K, with more than 10 times the daily value. Sarah L Booth, PhD, director of Tufts HNRCA Vitamin K Laboratory, says, Among the emerging functions were discovering for vitamin K are bone health, cardiovascular health, reducing inflammation, cognitive health and reducing risk for diabetes. All these functions are still exploratory, however.

Kale, Booth notes, is unusually rich in one of the two main dietary forms of the vitamin, phylloquinone (vitamin K1). A cup of fresh kale contains 215 micrograms of vitamin K, she says. Thats more than any other vegetable except collard greens.

– Curly kale, with ruffled, deep-green leaves and a pungent, bitter, peppery flavor.
– Dinosaur kale, also called Tuscan or Lacinato kale, with textured, dark blue-green leaves and a sweeter, more delicate flavor that kale newcomers might prefer.
– Ornamental kale, which is edible despite its name, is also called salad savoy. Its leaves range across the color spectrum, with a milder flavor and tender texture.

As a relative of broccoli, cauliflower and Brussels sprouts, kale shares those healthy veggies concentration of glucosinolate compounds. These compounds that give cruciferous vegetables their sometimes-bitter taste act as natural pesticides and discourage herbivores. Once eaten, glucosinolates are converted in the human digestive system to isothiocyanates, which have been linked to lower risk of cancers of the colon, bladder, breast, lungs, ovaries and prostate. Recent laboratory studies have also shown that these compounds may inhibit the proliferation of cancer cells.

Even your brain might benefit: A 2006 study found that eating at least 2.8 servings of vegetables daily slowed the rate of cognitive decline in subjects age 65 and older by about 40% compared to those averaging less than one serving a day. Researchers singled out kale as beneficial, along with broccoli and collard greens.

ARTERY AND EYE HEALTH: The fiber in kale, besides being good for your digestive system, also benefits your arteries. Research has shown that fiber-related nutrients in kale help the liver and intestines bind cholesterol and carry it out of the body. Although raw kale can help lower cholesterol, kale is especially effective when its been steamed for five minutes.

CAUTIONARY NOTES: Are there any downsides to this nutrition powerhouse? Booth cautions, People who have been prescribed warfarin, the most common anticoagulant medication, need to monitor their vitamin K intake because warfarin works by affecting the bodys vitamin K. Avoid major changes in your vitamin K intake, including kale, without consulting your doctor.

Kale also contains oxalates, which may be of concern to those at risk for kidney stones. Because oxalates interfere with absorption of calcium-which kale is otherwise high in-consume your dietary calcium at a different meal than when youre dining on kale.