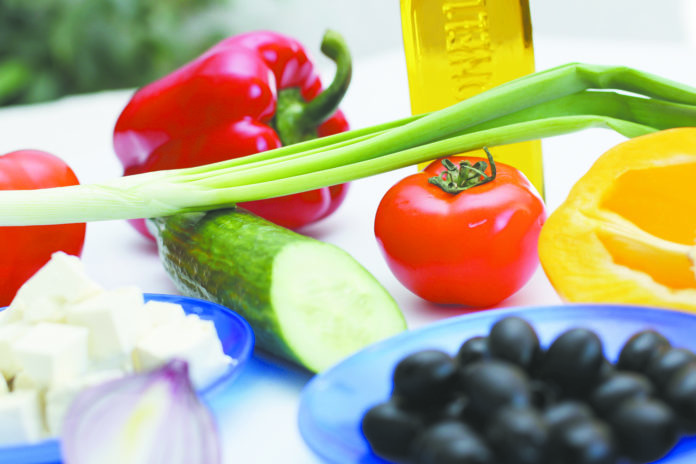 As a reader of this newsletter, you know that the “Mediterranean diet” has been associated with a wide range of health benefits. Most recently, we’ve reported on findings from the Spanish PREDIMED study linking such a diet to reduced risk of heart disease (June 2013) and cognitive decline (August 2013). Other studies have suggested preventive benefits against certain cancers, diabetes, Parkinson’s disease and depression. The Dietary Guidelines for Americans recommends the Mediterranean diet as one of a number of potential dietary patterns that can help prevent disease and promote health.

So it may surprise you to learn that there’s no such thing as an official Mediterranean Diet—not in the sense that there’s a South Beach or Zone or Atkins diet. The dietary plans tested in studies cited about the benefits of the “Mediterranean diet” vary widely—from 2 ounces of daily vegetables to 19 ounces, for example. Many of the foods we associate with Mediterranean countries—pizza or spaghetti and meatballs from Italy, moussaka or spanikopita from Greece—don’t really fit in the healthy dietary plans promoted as “Mediterranean.” Even in the countries bordering the Mediterranean Sea, traditional healthy ways of eating are increasingly giving way to more American-style fare, driven by convenience and economics.

“What these studies are really showing is that a diet consistent with current guidelines, whether it is called a Mediterranean-style diet or heart-healthy diet, is effective,” says Alice H. Lichtenstein, DSc, director of Tufts’ HNRCA Cardiovascular Nutrition Laboratory.

COMPARING DIETS: The first important scientific research to show that people in countries ringing the Mediterranean might be on to something, nutritionally, was the Seven Countries Study led by Ancel Keys of the Mayo Foundation after World War II (for which he’d developed the “K-ration”). The long-running study examined the diets and health of almost 13,000 middle-aged men in the US, Japan, Italy, Greece (including Crete), the Netherlands, Finland and Yugoslavia. Surprisingly, well-fed American men had higher rates of heart disease than those in countries whose diets had been restricted by the deprivations of the war. Residents of Crete enjoyed the best cardiovascular health, a difference scientists largely ascribed to their diet—based on fruits and vegetables, grains, legumes and fish.

Keys, along with Dr. Mark Hegsted, also was among the first to posit a connection between animal fats—saturated fat—and heart disease. These findings helped convince the American Heart Association to begin a campaign in 1956 to convince people that diets high in beef, butter and lard increased the risk of coronary heart disease. Keys and Hegsted also understood that the unsaturated fats found in liquid vegetable oils had beneficial cardiovascular effects—a message lost in the mid-1980s when public-health efforts focused on reducing total fat intake.

The resurgence of the “Mediterranean diet” today hearkens back to the Seven Countries Study, with recommendations similar to several eating plans developed in the intervening decades. The Mediterranean diets that have shined in recent studies actually closely resemble such clinically tested dietary plans as the DASH diet and the OmniHeart unsaturated-fat diet. The DASH plan (Dietary Approaches to Stop Hypertension) was tested in research sponsored by the National Heart, Lung, and Blood Institute in 1997 and shown effective at lowering blood pressure. In addition to cutting back on sodium, the DASH diet:

An important difference between a Mediterranean-style diet and the DASH plan is the former’s embrace of unsaturated fats, especially monounsaturated fat in the form of olive oil. Since the original DASH research, scientists have realized that reducing total fat is less important (other than for calorie control) than changing the composition of fats in the diet—substituting heart-healthy mono- and polyunsaturated fats for the saturated and trans fats that lead to unhealthy cholesterol levels.

The OmniHeart (Optimal Macronutrient Intake Trial to Prevent Heart Disease) study at Johns Hopkins University in 2005 tested three healthy diets: a carbohydrate-rich diet similar to the DASH diet, a diet rich in protein (almost half from plant sources), and a diet rich in unsaturated, mostly monounsaturated fat. All three diets resulted in modest improvements in blood pressure, LDL cholesterol and triglycerides. The unsaturated-fat version, much like the

Mediterranean-style diet, emphasized:
– Vegetables, fruit, legumes and whole grains
– Reduced intake of red meat
– Nuts
– Unsaturated fats
All three eating plans—DASH, OmniHeart and Mediterranean—strongly resemble the latest Dietary Guidelines for Americans. Those guidelines also note the health benefits of consuming moderate amounts of alcohol (up to one drink per day for women and up to two drinks per day for men), as does the Mediterranean diet.

THAT’S ITALIAN: If you want to take advantage of the health benefits of eating “like a Mediterranean,” it’s best to think of such a dietary plan as a Mediterranean-flavored version of those proven healthy-eating guidelines. Following a healthy diet might be easier when it’s given this Mediterranean twist, as many of the flavors Americans enjoy are included—in moderation. It could also be simpler to remember what to eat and what to avoid if you “think Mediterranean”; a similar factor has been shown to be important to the success of many diets, including the Atkins plan.

But you’ll have to put out of your head many of the elements most Americans associate with Italian, Greek and other Mediterranean cuisines. Although the first thing that pops to mind when most of us think “Mediterranean food” is pasta, the grains used in familiar pasta dishes have been processed. The healthy Mediterranean eating plans universally emphasize whole grains instead, much like the Dietary Guidelines for Americans. It’s questionable how accurately this reflects the actual traditional eating habits of people in Mediterranean countries. Says Lichtenstein, “I have not seen whole grains in Italy or Greece. If you’re eating paella, that’s certainly white rice. And what bread or pasta in the Mediterranean region is whole grain?”

The heaping helpings of cheese we associate with pasta dishes and pizza are out, too. Cheese is high in saturated fat, one of the primary ingredients this healthy diet is trying to avoid. The unofficial but widely adopted Mediterranean diet “pyramid” promoted by the non-profit Oldways group (see graphic) since 1993 puts cheese below only meats and sweets in the narrowest (lowest consumption) part of the pyramid. It notes that low- and non-fat cheese “may be preferable” and calls for limiting total saturated fat intake to no more than 7% to 8% of calories.

If you think of sausage as essential to Italian food and lamb with Greek cuisine, you’ll also need to practice moderation with both. It would help, in fact, if you forget everything you think you know about Mediterranean food—mostly from restaurants that have Americanized the cuisine and ramped up the meat, saturated fat and calories at the expense of vegetables, fruit and legumes. Think instead of Mediterranean fare consumed by the poorer peoples of the region.

As the Oldways pyramid site

“The ‘poor’ diet of the people of the southern Mediterranean, consisting mainly of fruits and vegetables, beans and nuts, healthy grains, fish, olive oil, small amounts of dairy, and red wine, proved to be much more likely to lead to lifelong good health.”

Tufts’ Lichtenstein adds, “The other important thing to remember is that people in the southern Mediterranean tended to be physically active as a way of life.”

BY THE NUMBERS: Quantifying this healthy diet, however, has proven to be a challenge. A recent meta-analysis of 41 prospective cohort studies totaling 2.9 million participants found wide ranges among what qualified as “adherence” to a Mediterranean diet. For legumes, for example, averages ranged from as little as 2 ounces a week to more than 18 ounces a week. That same analysis found that for every two-point increase of adherence to a Mediterranean-style diet—however defined—cardiovascular-disease risk dropped 11% and mortality risk was 9% lower.

The meta-analysis, presented at a recent meeting of the European Association for Cardiovascular Prevention and Rehabilitation, attempted to calculate “optimal” intakes of most of the key components of a Mediterranean diet. Specific amounts for olive oil, nuts and red wine were not available. Based on the 41 pooled studies, however, the analysis did determine these optimal daily intakes (figures are converted to ounces and rounded):

If you’re trying to put these averages into practice, you might think of them as guidelines for consumption across an entire week. To average 0.7-0.9 ounces of fish daily, for example, you’d need to eat about two 3-ounce servings per week (much as is already recommended by the American Heart Association).

For some practical suggestions on how to start eating more like a Mediterranean, see the box on this page.

OIL AND NUTS: The PREDIMED study that recently garnered headlines—not all of them accurate—gave one-third of participants extra-virgin olive oil. This group, as well as another one-third that received a combination of walnuts, almonds and hazelnuts, showed cardiovascular benefits compared to a control group. The fact that this control group was essentially also eating a Mediterranean diet—the study involved nearly 7,500 people in Spain—has led some to speculate that the benefits seen in the study must be linked specifically to olive oil and nuts.

In an editorial in the New England Journal of Medicine accompanying those findings, Lawrence J. Appel, MD, of Johns Hopkins and Linda Van Horn, PhD, of Northwestern University commented, “Our sense is that the policy implications of the PREDIMED trial relate primarily to the supplemental foods. Specifically, in the context of a Mediterranean-style diet, increased consumption of mixed nuts or substitution of regular olive oil with extra-virgin olive oil has beneficial effects on cardiovascular disease.”

But before you start guzzling olive oil, Tufts’ Lichtenstein cautions, “The emphasis on cardiovascular benefits for olive oil goes against all the data suggesting that polyunsaturated fats are better than monounsaturated fats, as in olive oil.” And nuts can backfire for your blood pressure if you choose salty varieties that boost dietary sodium intake.

Overall, “eating like a Mediterranean” might be a useful and tasty way to plan and stick to an overall healthy diet.