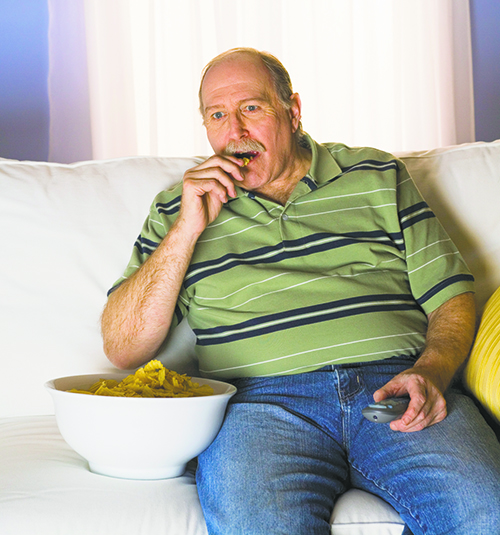 This months Super Bowl brings not only our greatest annual sports extravaganza, but also Americas biggest binge of snacking. As the teams collide on our TV screens, the chips, dip, hot wings, pizza and other munchies will vie for snacking supremacy in our living rooms. By the time the final whistle blows, the only sure winners will be calories, sugar, sodium and saturated fat.

But its not just the big game that brings out the snacks. According to a 2011 study, US consumers are snacking more than ever before, with between-meal food and beverages now totaling a quarter of average daily calorie intake. Reports Purdue scientist Richard Mattes, PhD, “Between 1977 and 2006, snacking in the American diet has grown to constitute a full eating event, or a fourth meal, averaging about 580 calories each day.”

Thats a troubling development, says Tufts Health & Nutrition Letter editor Irwin H. Rosenberg, MD. “Im not a big fan of snacking,” Dr. Rosenberg comments. “Snacks have been getting too easy a ride in the battle against obesity. But if you are going to snack, at least make healthy choices.”

GO NUTRIENT-DENSE: Smart snack choices can help keep up your energy levels all day, evening out the lulls your body and brain can experience in-between meals. Snacking can also help you get enough of the nutritious foods like fruits, vegetables, whole grains and low-fat dairy that you may struggle to consume at meals. The sample daily menus at the USDAs Choose My Plate website www.choosemyplate.gov, for example, all include snacks as part of the plan to meet the targets in the federal dietary guidelines-such as two tablespoons raisins and an ounce of unsalted almonds, one cup cantaloupe, or a quarter-cup dried apricots plus one cup of yogurt.

Healthy snack foods should meet the same standards youd set for mealtime choices: Pick foods that are nutrient-dense-delivering plenty of nutrition per calorie-and prefer whole, minimally processed snacks over refined products high in added sugars and sodium. Go for whole grains and high-fiber snacks, which will “hold” you longer between meals.

“Planning in advance is the key to curbing the calories,” says Nicola McKeown, PhD, director of Tufts Nutritional Epidemiology program, who has studied the health effects of whole versus refined grains and of added sugars. “Have a bowl of soup before you go to your Super Bowl party. The only way to have some control over what you eat is to bring a plate youve prepared yourself-veggies and low-fat dips. Why not bring a plate of cut-up whole-grain cereal bars rather than brownies?” Smart snack choices can make a difference. “Pick whole-wheat crackers instead of potato chips,” McKeown goes on, “and put something healthy on the crackers, like hummus.”

BE WHOLE-GRAIN WISE:Prepackaged 100-calorie snack portions have boomed in popularity as consumers strive to control their between-meal munching. “But not everybody can afford to pay for all that extra packaging, McKeown notes. Instead, you can take your snack of choice-popcorn, for example-and divvy up a big serving into little bags for snacks.”

Whole grains have also grown in popularity, with the Whole Grains Councils www.wholegrainscouncil.org Whole Grain Stamp now appearing on more than 7,600 products-including many snacks. Overall, snacks account for 18.8% of all products displaying the stamp, which certifies that a food contains at least half a serving (eight grams) of whole-grain ingredients.

But McKeown, a member of the Whole Grains Councils board of scientific advisers, cautions against simply adding whole-grain snacks to your diet. “Substitution is the key,” she says. “Dont snack on whole grains like popcorn or whole-grain pretzels on top of those refined grains you may already consume and rationalize that its good for you. You still have to watch your caloric intake-cut back on refined-grain snacks and substitute with whole grain.

Check the Nutrition Facts panels on your snack foods just as you would mealtime choices. “As new snack products become available in the marketplace, you also have to balance other factors when choosing whole grains,” McKeown adds. Look at the label to see if the product has added sugars (corn syrup, sucrose, fructose, high fructose corn syrup).”

Not only added sugars but also saturated fat, trans fat and sodium can sneak into your diet via snacks even if youre careful about what you put on the plate at breakfast, lunch and dinner.

LEARNING FROM LABELS: Those Nutrition Facts panels can reveal some surprises. Even snack products from the same manufacturer can vary widely in their nutritional pros and cons. Popular brands of cereal bars, for instance, can vary widely in calories, saturated fat and sodium, with higher counts for those designed to make you feel “fuller.”As for chips, baked potato chips really are lower in saturated fat than fried chips, but the difference isnt as much as you might think-typically one gram per serving. Theyre best considered a splurge. Dont count on the label term “natural” to make chips any better for you, by the way.

POPPING SMARTS: Even with close reading of Nutrition Facts labels, its hard to beat doing it yourself for healthy snacking. Compare, for example, a popular packaged microwave popcorn with plain DIY kernels:

To add a little butter flavoring to your DIY popcorn, without the fat, spritz the popped kernels with a little butter-flavored cooking-oil spray, and of course go easy on the salt.

Now thats a snack you can serve to your Super Bowl crowd and feel like a winner.