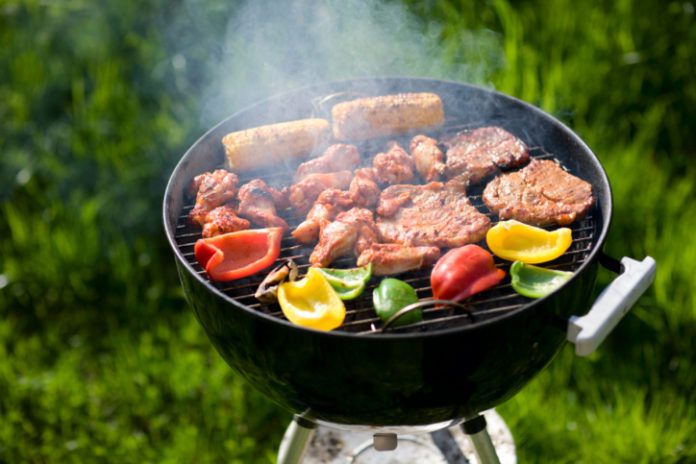 Warmer weather means the return of backyard barbecue season and time to fire up the grill. Shifting the action outdoors lets you replace the fried foods and fatty casseroles of indoor cooking with fresh, no-added-fat grilling, which can give a flavorful sizzle not only to meat, poultry and fish but also to vegetables and even fruits. The latest Dietary Guidelines for Americans recommends grilling (along with broiling, poaching and roasting) because cooking on a grill doesnt add extra fat.

This is a great time to start thinking about incorporating grilling into the weekly routine, says Jennifer Hall, a dietetic intern at Tufts Frances Stern Nutrition Center. Grilling is an easy and healthful way to cook just about anything-meats, veggies, fruits, even a homemade pizza. Grilling is a more health-conscious option than frying and helps reduce the fat content of meats. This is also a time to get creative with unique flavoring without excess calories; try dry rub spices on meats or light marinades for extra flavor.

But backyard cookouts bring their own potential hazards. The downside of otherwise-healthy grilling is that cooking meat, poultry and fish over high heat, especially to well done or to the point of charring, produces potentially cancer-causing compounds. Outdoor cookouts can also fire up appetites-and that big, thick steak with a side of fatty potato salad wont be good for you no matter how its prepared. Finally, backyard-barbecue season coincides with the peak of foodborne-illness season (see box).

Some summertime smarts can keep you both healthy and safe at barbecues and picnics, however. Keep the tips in this Special Report in mind and the only thing youll have to worry about are mosquitoes.

When muscle meats, including beef, pork, lamb, poultry and fish, are cooked at high temperature- such as grilling over an open flame or hot coals-potentially cancer-causing compounds are formed. Amino acids (the building blocks of proteins), sugars and compounds found in muscle tissue called creatines combine at high heat (especially over 300 degrees Fahrenheit) or when cooked for a long time to form heterocyclic amines (HCAs). When fat and meat juices drip onto coals or grill surfaces and flame up, polycyclic aromatic hydrocarbons (PAHs) can form and adhere to the surface of the meat. PAHs can also be formed when meat is smoked, and are found in charred surfaces as well as cigarette smoke and car exhaust.

Do HCAs and PAHs cause cancer? Laboratory experiments have shown that both are mutagenic-that is, they cause changes in DNA that might increase the risk of cancer. Studies in animals have shown that those fed very high amounts of HCAs and PAHs-equivalent to thousands of times the doses a human would consume in a lifetime-develop cancer. But according to the National Cancer Institute (www.cancer.gov), Population studies have not established a definitive link between HCA and PAH exposure from cooked meats and cancer in humans. Nor are there any federal guidelines for consumption of HCAs or PAHs found in meat.

For a complete guide to summer food safety, see our June 2010 Special Report. Here are a few key reminders:

But that doesnt mean you should go ahead and char that steak. Its difficult to determine exact levels of exposure from the diet, such as by food questionnaires. Different levels of enzymes that metabolize HCAs and PAHs may mean people react differently to the same exposure amounts.

Some studies, moreover, have found evidence of a link between HCAs and PAHs and increased cancer risk in humans. In 2001, National Cancer Institute researchers who compared 146 patients with colorectal adenomas (benign tumors that can become malignant) with 228 controls found an elevated risk associated with HCA intake. More recently, NCI scientists looked at data on 1,008 participants among the 17,072 people in the Prostate, Lung, Colorectal and Ovarian Cancer Screening Trial who developed colorectal adenomas. Consumption of grilled meat and well-done or very well-done meat was associated with a greater than 50% increased risk of adenomas. Another new study of participants in the same trial with advanced adenomas or colorectal cancer suggested that extra risk from HCAs and PAHs may depend in part on genetic factors.

In 2009, University of Minnesota scientists looked at the eating habits of more than 62,000 people who were followed for nine years. Those who preferred their meat well-done or very well-done-and thus likely to consume more HCAs-were 60% to 70% more likely to develop pancreatic cancer.

So, even if the jury is still out on HCAs and PAHs, clearly its smart to limit your intake. (Besides, do you really want to eat chemicals also found in cigarette smoke and car exhaust?) Researchers have also taken a look at what foods and cookout techniques increase or decrease levels of these potential carcinogens.

If youre not ready to give up meat, other research suggests ways to minimize your exposure to HCAs and PAHs. A new Portuguese study found that grilling with coconut-shell charcoal produced significantly fewer of these compounds than regular wood charcoal, even at almost 400 degrees. Whatever type of charcoal you use, start fresh each time you grill: Continuous grilling with the same charcoal, in which previously dripped fat combusts, resulted in higher HCAs and PAHs. (Though not specifically tested, this suggests you might want to clean the flavor bars and lava rocks in your gas grill between cookouts.)

A 2010 Japanese study found a sharp increase in HCAs in very well-done meats, poultry and fish. Meats grilled churrasco style, a Brazilian barbecuing technique that typically dispenses with a grate, cooking directly over the embers on spits or skewers, showed particularly high levels of HCAs. Foods that had been marinated prior to grilling were lower in HCAs.

That finding about marinating confirmed two previous studies, both published in 2008. One reported that marinating beef in beer or red wine before cooking significantly reduced HCA levels. Portuguese researchers marinated beef samples in beer or red wine for up to six hours before cooking, then compared HCA levels to un-marinated control samples. Levels of the potential carcinogens were reduced 88% in the beer-marinated beef and 40% in the wine batch. A tasting panel found the beer-marinated steaks as good as regular beef, while the wine-soaked steaks scored lower; marinating for longer than two hours had negative effects on odor, color and overall quality.

Marinating can reduce potential carcinogens in grilled foods. The American Heart Association recommends this universal marinade for meat as well as vegetables:

Combine all ingredients except oil in a bowl and whisk together. Slowly drizzle in oil, whisking continually to form an emulsion. You can also combine all ingredients in a food processor if you have one. Makes 4 servings. In the second study, Kansas State University food scientists tested beef round steaks grilled at 400 degrees Fahrenheit. Steaks marinated for an hour in a commercial marinade spice mix prepared with oil, water and vinegar had 57% to 88% lower levels of HCAs. If you prefer not to spice up your meat, its worth noting that marinating in just the oil, water and vinegar also cut HCA levels compared to un-marinated steaks.

What else can you do to minimize HCAs and PAHs? Here are some tips from the NCI and other experts:

Also on the menu

Simply eating less meat reduces your risk, too, and portion control is a good idea anyway. Fill out your plate by tossing plenty of vegetables and fruits on the barbecue. Vegetable kabobs make it easy to grill mushrooms, peppers, cherry tomatoes, zucchini, yellow squash and seasonal favorites. Inexpensive grill pans let you cook small vegetable pieces without having them fall through the grate. Hard veggies like potatoes and sweet potatoes can be microwaved until tender, tossed in a little oil and finished on the grill.

Be smart, too, about the rest of your cookout plate. Top your burgers with reduced-fat or fat-free cheese. Watch the salt, especially in sauces and condiments. Pick whole-grain buns and rolls. Instead of pie, serve grilled fruits for dessert-pineapple slices, peaches, plums and nectarines caramelize deliciously. And wash it all down with water, unsweetened ice tea or other sugar-free beverages.

Grilling is a fun and seasonal way to cook and experiment with different flavor combinations, says Tufts Hall. Remember to always practice safe cooking and grilling techniques and youll be sure to have a hit with friends and family this summer.