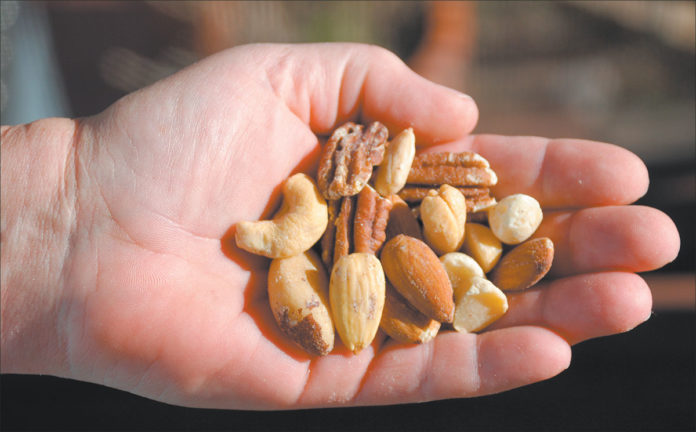 Eating a daily handful of nuts-about one ounce or three tablespoons-could reduce your risk of dying from the most common causes of death. Results from the largest study of its kind, following nearly 119,000 men and women for up to 24 years, show that regular consumers of any type of nuts were less likely to die from heart disease, cancer and lung disease or from all causes than non-nut eaters. As frequency of nut consumption went up, mortality risk dropped.

This is a good study, comments Jeffrey Blumberg, PhD, director of Tufts HNRCA Antioxidants Research Laboratory and co-author of a recent review of the evidence for nuts health benefits (see the May 2012 newsletter Special Supplement). As with most good research, it is an incremental and logical next step in the continuing investigation of the health benefits of this food group.

CRACKING NUTS BENEFITS: Why are nuts good for you? Nuts are rich in healthy unsaturated fats, protein and fiber and vitamin E and low in carbohydrates, Blumberg explains. The total antioxidant capacity of a serving of nuts is comparable to one of broccoli or tomatoes. Previous studies have linked nut consumption to improvements in cholesterol, blood pressure and blood-sugar control, among other benefits that might underlie the mortality findings.

Although nuts are also high in calories, ranging from 160 to 204 calories per ounce, the new research found that more-frequent nut eaters actually tended to be leaner. Theres a general perception that if you eat more nuts youre going to get fat, commented lead researcher Ying Bao, MD, ScD, of Brigham and Womens Hospital in Boston. Our results show the opposite.
Other studies have reported similar results. Says Blumberg, Some of the fat in nuts is not actually digested and so does not contribute to actual calorie intake as much as would be calculated from the content-and, thus, the lack of association with nut consumption and overweight/obesity; indeed, there is a slight inverse correlation between the two. Also, several studies indicate that nuts are particularly satiating, so people tend to eat less during a subsequent meal or snack.

Nonetheless, its still a good idea to substitute nuts for less-healthy foods, such as chips and cookies or salad toppings. Nuts can also stand in for meat and even help thicken sauces. (See box.)

ALL TYPES OF NUTS: The new research, published in the New England Journal of Medicine, combined data from two large observational studies-the Nurses Health Study of women and the Health Professionals Follow-Up Study of men. During the follow-up period of 20 to 24 years, 27,429 participants died. Those who ate nuts at least daily were 20% less likely to die of all causes than those eating no nuts. The reduced risk was most apparent for deaths from heart disease (29%), followed by deaths from cancer and lung disease.
Participants ate all types of nuts, including peanuts, which are legumes and not true tree nuts but have a similar nutrient profile. An analysis found no significant difference in mortality benefit between types of nuts.
The study was supported by the National Institutes of Health and the International Tree Nut Council Nutrition Research and Education Foundation (which had no role in designing the study or reporting the results).
As an observational study, the findings cant prove cause and effect. But Dr. Bao said she was very confident the observations reflect a true benefit from nut consumption, adding, We did so many analyses, very sophisticated ones to eliminate other possible explanations for nut eaters reduced mortality risk. Possible confounding factors the study eliminated included smoking status, exercise habits and diabetes.