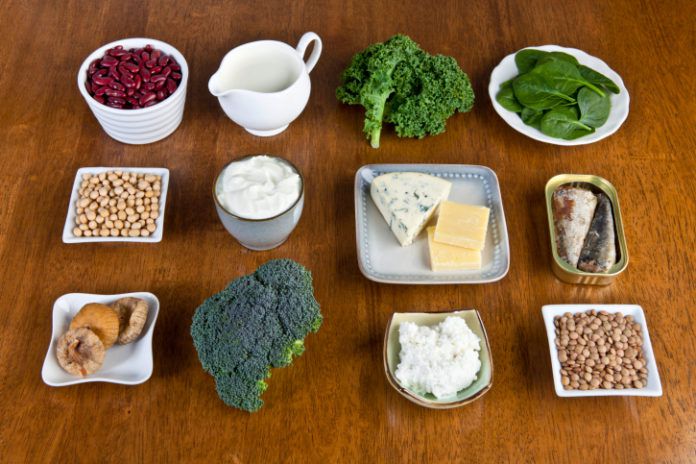 With questions being raised about supplements, its time to take a fresh look at getting enough calcium from your diet.

Calcium is not only the most abundant mineral in the human body, its also the one Americans spend the most getting more of-shelling out over $1 billion annually on calcium supplements. About 43% of the US population, including almost 70% of older women, use dietary supplements containing calcium.

But new research and expert recommendations suggest that getting calcium in pill form may not only be less effective, but also carry health risks. The US Preventive Services Task Force recently recommended against daily low doses of calcium supplements, citing ineffectiveness at preventing bone fractures as well as a slightly increased risk of kidney stones. Two studies have linked calcium supplements to added heart risks. (See the September Health & Nutrition Letter for complete reports.)

Fortunately, theres a safe and easy way to get all or most of the calcium your body needs to keep your bones strong-the old-fashioned way, in beverages and food. Bess Dawson-Hughes, MD, director of Tufts HNRCA Bone Metabolism Laboratory, says, Many adults are not getting quite enough calcium in their diets. My first recommendation is to modify their food intake to include one more calcium-rich food a day. We have lots of foods to choose from, and calcium has been added to many foods, including juice and cereal.

Use supplements, Dr. Dawson-Hughes adds, only to bridge any gap between dietary calcium and the 1,000 to 1,200 milligrams a day most adults need. You need to get up into the recommended intake level of calcium, she explains, but there is no point in exceeding that level because there is no benefit. And there are potential risks, however low they might be, that there would be adverse consequences to exceeding those levels. So why spend more money and take more risks?

Estimate how much calcium youre getting, on average, from beverages and foods; then see if you can readily increase that intake with a few calcium-smart dietary choices. With an overall healthy diet, you shouldnt have to add much calcium in pill form, if at all, to reach recommended levels. Dr. Dawson-Hughes says, I recommend avoiding high-dose calcium supplements, such as those exceeding the recommendations by 500 to 1,000 milligrams a day.

To understand why its important to get enough calcium, preferably from dietary sources, it helps to know how the body uses this key mineral. Although calcium has many roles in the body besides building strong bones, only about 1% of the bodys calcium is used in muscle and blood-vessel functioning, nerve transmission, intracellular signaling, hormonal secretion and other metabolic activity. The other 99% is stored in your bones and teeth. Blood levels of calcium dont vary much with changes in the amount of calcium you consume-instead, if youre low on calcium intake, your body borrows what it needs from your bones. Think of your bones as like a calcium savings account, which gets tapped when the day-to-day checking account runs low.

Your skeleton doesnt remain fixed after youve reached adulthood and stop growing; your bones are constantly in flux, remodeling by resorption and deposition of calcium. In older adults, particularly postmenopausal women, the balance between bone breakdown and formation shifts, resulting in bone loss and the risk of osteoporosis. Without adequate calcium intake, this breakdown accelerates.

Worse, the bodys ability to absorb calcium from food declines with age-from as high as 60% in children to 15% to 20% in adulthood, possibly even lower among seniors. Thats one reason the recommended intake of calcium goes up to 1,200 milligrams after age 50 for women and after age 70 for men.

According to national nutritional surveys, from 2003 to 2006 Americans average calcium intake from food plus supplements ranged from 918 to 1,296 milligrams daily. The typical supplement user is getting about 330 milligrams of that total in pill form. Overall, between diet and supplements, only adolescent girls ordinarily fall short of recommended calcium intakes. An estimated 1 in 20 women over age 50 actually exceeds the tolerable upper intake level (UL) for that age group of 2,000 milligrams daily-because of supplements.

When most of us think of calcium in the diet, a tall glass of milk pops to mind. Its true that milk and other dairy products such as yogurt and cheese are rich natural sources of calcium and the major source in the US diet. An eight-ounce glass of milk supplies almost 300 milligrams of calcium-nearly a quarter of what a 50-plus woman needs in a day. The calcium in a glass of milk varies only slightly among different types, dropping a little as fat percentages increase: Nonfat milk, the healthiest choice anyway, has 299 milligrams, while 2% has 293 and whole milk contains 276 milligrams in eight ounces.

Low-fat yogurt can contain more than 400 milligrams of calcium per cup. Better yet, the active cultures in yogurt increase the bodys absorption of calcium. The newly popular Greek yogurt loses some of its calcium through the straining process, but is still a good source. If youre comparing Nutrition Facts panels, keep in mind that the Daily Value (DV) for calcium, used to calculate percentages, is 1,000 milligrams-you may need more-and that 8 ounces of yogurt measures weight, while 8 ounces of milk measures fluid volume.

Cheese, which concentrates the nutrients in liquid milk, contains about 300 milligrams of calcium in just a 1.5-ounce serving. Of course, cheese can also contribute saturated fat, so consume in moderation.

But what if you dont like milk or cant tolerate the lactose in milk? Recent years have seen an explosion of milk alternatives made from plant sources such as soy, almonds and coconut. When fortified, these can deliver 450 milligrams of calcium in an eight-ounce glass. Other soy products, such as tofu, can also be fortified with calcium.

Additional calcium-fortified products at your supermarket include breakfast cereals and orange juice and other beverages.

Not All at Once

You may be wondering: Isnt consuming calcium-fortified foods and beverages the same as popping a calcium pill? Its true that all calcium is the same chemical element, but the form of it used in fortification and supplements can vary-along with the bodys ability to absorb that calcium. The most common and inexpensive form in supplements (as well as over-the-counter antacid products) is calcium carbonate, which depends on stomach acids to be absorbed and so is best taken with food. When calcium carbonate is used to fortify foods, as in soy milk, that problem is obviously solved. Calcium citrate, also found in supplements, can be taken with or without food, and is a good choice for people with absorption disorders or inflammatory bowel disease. Fortified juices often contain calcium citrate malate, a well-absorbed form of the mineral. Other forms of calcium include gluconate, lactate and phosphate.

Note that these forms of calcium differ in how much of the element they actually contain. Calcium carbonate is 40% calcium by weight, while calcium makes up only 21% of calcium citrate. So its important to check the Nutrition Facts or Supplement Facts panel to make sure how many milligrams of actual calcium youre getting.

Besides bringing other nutrients to the party, foods containing calcium-including fortified foods-have the advantage of delivering the mineral in more readily absorbable amounts. Its better to get your calcium in three or four meals and snacks spread throughout the day than in one or two big doses. Thats because the percentage of calcium your body actually absorbs depends in part on the amount consumed at any one sitting. Absorption is highest in doses less than 500 milligrams.

There may also be a downside to the sudden surge of calcium from high-dose supplements. In an editorial in the journal Heart, accompanying the latest findings linking extra calcium to heart attack risk, Ian R. Reid, MD, and Mark J. Bolland, MBChB, of the University of Auckland wrote, It is now becoming clear that taking this micronutrient in one or two daily boluses is not natural, in that it does not reproduce the same metabolic effects as calcium in food. The evidence is also becoming steadily stronger that it is not safe, nor is it particularly effective. Instead, they advised obtaining calcium from an appropriately balanced diet.

Eating for Your Bones

You may be surprised, in fact, at how much calcium is found in foods other than dairy products and fortified foods. Take a look at this months recipe (page 7), and note that one serving of our Ragout of White Beans & Chard with Eggs contains 221 milligrams of calcium-no dairy needed. Beans and greens both contain moderate amounts of calcium, as do canned fish such as sardines and salmon (with the bones), okra, crabmeat, clams and fresh fish such as ocean perch and rainbow trout.

The calcium content of many foods comes with a caveat or two, however. Foods with high levels of oxalic acid, which binds to calcium, deliver less calcium than their nutritional numbers promise; these include spinach, collard greens, Swiss chard, sweet potatoes, rhubarb and beans. Even simply eating spinach with milk has been found to reduce the absorption of calcium from the milk. Phytic acid, found in whole grains, wheat bran, beans, seeds, nuts and soy-protein products, has a similar calcium-binding effect. Whole-grain wheat products (but not bran) dont appear to have this effect, so your cereal isnt cramping the calcium from your milk.

How much is enough? Adult Recommended Dietary Allowances (RDA) for calcium:

How much is too much? Daily adult Tolerable Upper Intake Levels (UL) for calcium:

The National Institutes of Health advises, however, For people who eat a variety of foods, these interactions probably have little or no nutritional consequence and, furthermore, are accounted for in the overall calcium DRIs (Dietary Reference Intakes), which factor in differences in absorption of calcium in mixed diets. In short, aim for 1,000 or 1,200 milligrams daily of calcium going in, and dont worry too much about what percentage your body can utilize.

It is important, of course, to get plenty of vitamin D, which your body needs to make use of the calcium you consume. Studies by Tufts researchers and colleagues have found that if youre not getting enough vitamin D, even getting adequate calcium may not protect your bones. Because adequate vitamin D can be difficult to obtain from diet alone, without regular sun exposure to make the sunshine vitamin you may need supplements to reach the 800 IU daily associated with fracture prevention in Tufts studies.

The bottom line for your bones? Says Tufts Dr. Dawson-Hughes, We need to encourage food sources of calcium and other nutrients. Its an old message, but its timely again because we are getting a backlash on supplements.