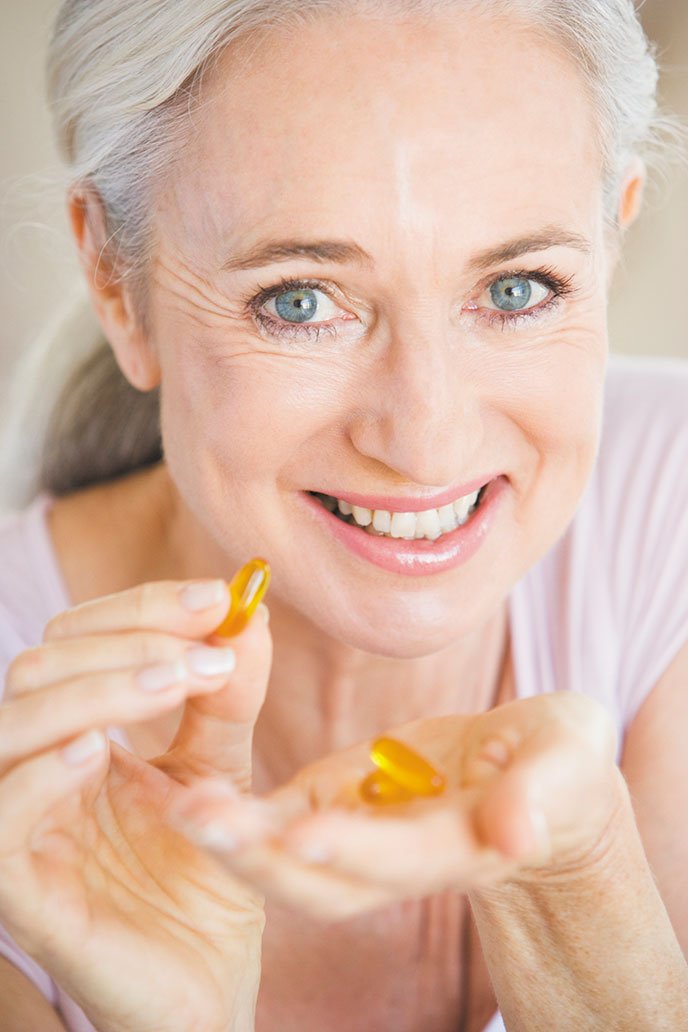 As a regular reader of this newsletter, you know to pay attention when a five-year clinical trial with more than 3,000 participants reports no benefits from omega-3 supplements against cognitive decline. Such a study – one of the largest and longest of its kind—would seem to slam the door on hopes for brain benefits of fish-oil pills. But before you go searching for the receipt on the last batch of omega-3 supplements you bought, Tufts experts have a couple of caveats.

“It’s a good study, but not the final word on omega-3 or other supplementation and cognition,” says Tammy Scott, PhD, a scientist at Tufts’ HNRCA Neuroscience and Aging Laboratory.

The study also found no benefits compared to placebo from supplements of lutein and zeaxanthin, two carotenoid compounds found in green leafy vegetables. In 2008, Elizabeth J. Johnson, PhD, a scientist in Tufts’ HNRCA Antioxidants Research Laboratory, and colleagues published an exploratory study that found short-tern memory, learning and verbal-fluency improvements from supplementation with lutein and omega-3s. Looking at these new findings, Johnson says, “This population may not have been the best to study the effect of lutein/zeaxanthin and omega-3 fatty acids on cognitive function.”

BRAIN FOOD?: It makes sense that the omega-3s found in fish, EPA (eicosapentaenoic acid) and DHA (docosahexaenoic acid), might help protect the brain. DHA is an essential component of brain cells, and people with Alzheimer’s have been found to have low levels of DHA. Epidemiological studies have linked greater fish intake to slower rates of cognitive decline. One Tufts study, for example, reported that people with the highest blood DHA levels, as well as those eating the most fish, were at dramatically lower risk of dementia and Alzheimer’s disease.

But this isn’t the first time hopes for brain benefits from omega-3s in pill form have been dashed. In 2011, a study that tested omega-3 supplements in older patients with pre-existing heart disease found the pills made no difference.

In this latest study, researchers took advantage of data from the Age-Related Eye Disease Study 2 (AREDS2), a followup to groundbreaking research that showed a combination of antioxidant vitamins could help prevent age-related macular degeneration (AMD). AREDS2 tested the addition of DHA/EPA (1 milligram daily) as well as lutein (10 milligrams) and zeaxanthin (2 milligrams). None boosted the benefit against AMD, except for participants with very low dietary intake of lutein/zeaxanthin.

Because many of the participants agreed to a battery of cognitive tests every two years, the data could also be used to look for brain benefits. Participants, average age 72, were randomly divided into four groups:

Because all were at risk of AMD, they were also offered the original or a modified AREDS formula.

“Contrary to popular belief, we didn’t see any benefit of omega-3 supplements for stopping cognitive decline,” reported Emily Chew, MD, of the National Eye Institute. In fact, none of the tested nutrients made any significant difference, including extra zinc or beta carotene. The findings were published in JAMA.

OLDER AND WISER: But Tufts’ Johnson points out, “This was a well-nourished, highly educated population (66% had at least some college education or more, 20% had graduate degrees). And so, perhaps supplementing an already healthy diet to highly educated individuals isn’t going to have much added benefit on cognition.” Moreover, since all had early or intermediate AMD, it’s difficult to translate the results to the general population.

Scott agrees: “On the one hand, you could say that the study showed that omega-3 and lutein/zeaxanthin supplementation isn’t effective in slowing/preventing cognitive decline in people who are older and already have a sufficient intake of these nutrients. On the other, it really doesn’t say anything about intervention at earlier ages and in people whose diets aren’t optimal.”

She also notes that the study combined a battery of eight different cognitive tests into a single score, rather than looking at supplements’ effects on separate mental skills. This could have obscured benefits on individual functions, such as memory or verbal fluency.

So what should you do to protect your brain? A healthy diet, including fish, vegetables and fruits such as berries, plus plenty of physical activity remains the best prescription for brain health, rather than relying on pills. But if you also choose to take omega-3 supplements and/or lutein/zeaxanthin, this latest study probably isn’t reason enough to go back to the store and demand a refund.