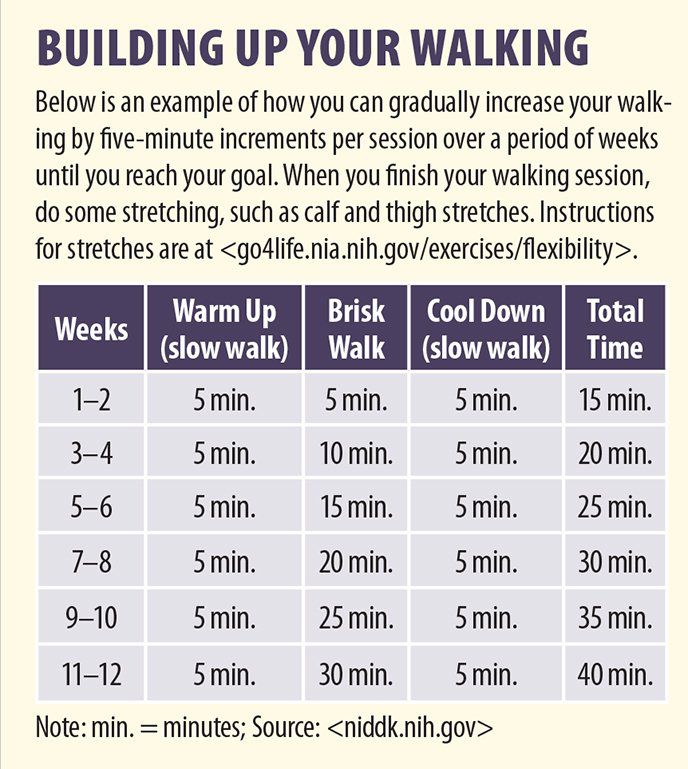 Walking may seem like a pretty simple activity. But, several different parts of your body are involved, like your heart, lungs, nerves, muscles and bones. So, your walking pace may slow if you’re having a problem in one or more of these parts of the body. Experts are finding it’s helpful to monitor changes in walking speed over time so that potential problems can be addressed earlier. And, working to preserve your walking (gait) speed as you age, including by staying physically active, may support your quality of life as you age.

“A person’s usual walking speed can tell us many things, such as long-term risk of falling, breaking a bone, being hospitalized and ultimately how much longer a person will likely live,” says Roger A. Fielding, PhD, director of Tufts’ HNRCA Nutrition, Exercise, Physiology and Sarcopenia Laboratory. “Some geriatric clinics are starting to check walking speed because they’re beginning to realize it can provide an overall look at how someone is really doing.”

“Walking speed, like other vital signs (such as blood pressure and pulse), is an indicator of other things that are going on in the body,” says Stacy Fritz, PhD, PT, director of the physical therapy doctorate program at the University of South Carolina in Columbia. “Once we’ve identified that walking speed is slowing, we can investigate why and address the underlying issue(s).”

For example, one person’s walking speed may be slowing because of diabetes-related nerve damage in the feet. Another person may be walking more slowly due to loss of muscle mass and strength. And in some cases, changes in brain health may contribute to slower walking pace.

As people age, it’s common for both their cognitive (brain) function and their walking to slow down. Scientists are investigating the association.

Walking time. Research suggests moderate-intensity physical activity like walking may help decrease age-related shrinkage (decline in volume) in the brain, including the hippocampus, compared to inactivity. The hippocampus is important for cognitive functions like memory and thinking, among other tasks. It’s estimated the hippocampus shrinks by about 1% per year between the ages of 60 to 90.

A new study published in Neurobiology of Aging looked at 141 initially well-functioning older adults (ages 70-79). Those who did better keeping up the amount of time they spent walking per week over a 10-year period (as reported annually) had less shrinkage of their hippocampus. They also had a smaller decline in cognitive ability. This was regardless of walking speed and the amount of walking reported initially.

However, the study wasn’t the type that can prove cause and effect. It could be that lagging brain function and underlying brain shrinkage were among the reasons why some people walked less.

Walking speed. “Physical activity is good for your brain, but whether improving your walking speed could actually improve cognition is uncertain,” says Andrea Rosso, PhD, MPH, who leads the Brain, Environment, Aging and Mobility Lab at the University of Pittsburgh Graduate School of Public Health. “It could be that we see an association between a decline in walking speed and cognition because these functions are controlled, in part, by the same section of the brain.” That’s what Rosso and her colleagues found in a recent study published in Neurology.

Brain scans completed toward the end of the study showed that the right side of the hippocampus was smaller than expected (suggesting shrinkage) in people with both a greater decline in walking speed and cognitive impairment. Not only is this part of the brain important in memory and thinking, it’s also important in spatial orientation (like your ability to orient your body in the surrounding environment or navigate a route). Rosso says it’s uncertain what was driving the changes in the brain, but high blood pressure is one possibility. Hypertension was associated with both cognitive impairment and slowed walking in the study. Stay tuned for more research in this area.

How do you know if your walking speed is something to be concerned about? Researchers and medical professionals often use a walking speed test, which is most helpful when repeated over time so you can compare results. Fritz explains the test involves marking off a walking course, typically 4 to 10 meters in length (about 41/3 to 11 yards), with extra space at the start and finish that you don’t count. Then the meters you walk per second are calculated to determine walking speed. The pace you use for the test should be self-selected walking speed, which is the pace you walk daily to get from place A to place B – not your fastest speed.

Although you could potentially do a walking speed test yourself, it’s best done with a trained professional. If you’re tech-savvy, there are smartphone apps (search online for “gait speed app”) that you can use to check walking speed on your own. If you need a low-tech option, even a simple pedometer is useful. “Although a pedometer doesn’t track walking speed, it can give you an idea of how much walking you’re doing, which supports increased physical activity,” Fritz says. “And, an increase in physical activity can lead to increased walking speed.”

Decreased ability to walk may lead to a vicious cycle of reduced physical activity and physical weakening that can directly impact your health and survival. So, do what you can to maintain or improve your walking as you age.

You can increase your walking speed by improving the body systems involved in walking, like your cardiovascular system and muscles in your trunk and legs. Regular physical activity can help you do that. “The best way to increase your physical activity is to find a type of exercise you like to do,” Fielding says. “Walking is a good place to start since it’s fairly easy and enjoyable. You can do muscle strengthening (resistance) exercises to supplement that.”

Watch posture. “Poor posture can slow you down when you’re walking,” Fritz says. “As people age, they tend to bend over when they’re walking or standing. Correcting that may not always be possible, such as in progressive conditions like osteoporosis. Other times people don’t realize they’re bending forward. In that case, it may help to check a side view of your posture in a mirror.”

Improving posture may also require strengthening certain muscles. “Poor posture is often a result of weakness in the buttock muscles,” Fritz says. “Weak buttock muscles also are one reason people have trouble walking fast or going up and down stairs as they age.”

The National Institute on Aging provides step-by-step instructions and photos of how to do these lower body exercises at <go4life.nia.nih.gov/exercises/strength>. An exercise professional or a physical therapist can also teach you these exercises and ensure you’re doing them correctly. Do such resistance exercises two or three days a week, with at least a day of rest in between.

Train your brain. Practicing walking supports the brain patterns used to engage the muscles and nerves needed for walking. “As you get older, it can become more challenging to walk and do something else at the same time, such as carrying a cup of coffee or stepping over a door frame while you’re walking,” Fritz says. “But, it can help to practice those things.” For example, practice walking while carrying something, or set up obstacles on the floor of a room and practice walking and stepping over the objects.

Sometimes the hardest part of an exercise program is keeping it up over the long term. Fielding suggests a couple of tactics to help with this: “Our research has shown it can be helpful to exercise in groups (such as a mall walking group). You often make friends with people in the group, and that can increase your ability to stick with the program. Even just walking with a friend usually helps you stay with your exercise plan.”

Fielding also recommends setting goals for your walking program or other exercise routine. For example, look at how much you’re currently walking, and think about how you can increase it over time. When you’ve met a goal, reward yourself. Maybe that’s some new exercise garb, like fun athletic socks or comfortable walking pants. Choose whatever motivates you to keep moving!