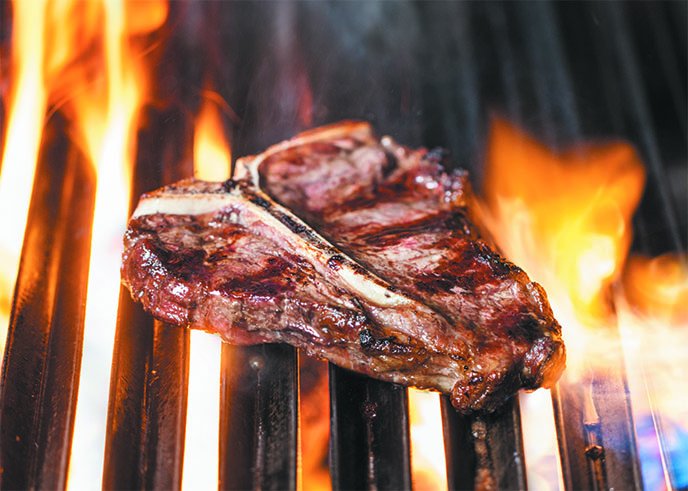 Not since the TV-cartoon heyday of Fred Flintsone’s “modern Stone Age family” have cavemen been so in vogue. The Paleo Diet, a book by Loren Cordain, PhD, has been a bestseller since it was first published in 2002, and it has spawned a pile of cookbooks and a glossy magazine devoted to “modern day primal living.” A Google search for “Paleo diet” retrieves 7.7 million hits. Actor Chris Pratt credits the Paleo diet for getting him in shape to star as the buff hero in the Guardians of the Galaxy movie.

“Like many fad health claims, it appeals to the notion that if modern lifestyles are causing our health problems, if only we could go back to the way things were, everything would be great,” says Zach S. Conrad, a PhD candidate in Tufts’ Friedman School whose research focuses on the relationship between diet patterns, health outcomes, and environmental outcomes.

As popularized by Cordain, now a professor emeritus in the Department of Health and Exercise Science at Colorado State University, the Paleo diet attempts to replicate what humans ate in the Paleolithic period, which ended about 12,000 years ago. “We are Stone Agers living in the Space Age,” Cordain writes. “Nature determined what our bodies needed thousands of years before civilization developed, before people started farming and raising domesticated livestock.”

GROWING PAINS: It is true, says Tufts’ Conrad, that when humans switched from the Paleolithic hunter-gatherer lifestyle to agriculture, there were initial negative health effects. “But that isn’t because grains are bad for you; it was because the change was so abrupt,” he explains. “People switched to eating almost only cereal grains, which resulted in severe micronutrient deficiencies, many of which are evident in skeletal remains. Over time, however, humans’ diets became more diversified with the advancement of agriculture and civilization.”

Lifespans also increased, as Paleolithic peoples had rarely lived beyond their 30s. In a seminal paper on the diets of early humans published in Nutrition Reviews, Stanley M. Garn, PhD, and William R. Leonard, PhD, pointed out: “How past diets bore on chronic and debilitating diseases is conjectural, given the abbreviated lengths of life. So we cannot assume that Australopithecines were free of colorectal cancer or that the people of the Mesolithic did not suffer from hypertension.” (Acute diseases and micronutrient deficiencies, however, are clearly evident in skeletal remains.)

Many modern diseases are “diseases of affluence,” says Kenneth Sayers, PhD, an anthropologist at Georgia State University. “They’re diseases that come about simply because we’re living long enough that they can show their effects.” If hunter-gatherers really were healthier, he adds, they didn’t enjoy those benefits for long: “It’s hard to be healthy when you’re dead.”

OPPORTUNISTIC EATING: Sayers and Kent State anthropologist C. Owen Lovejoy, PhD, famed for reconstructing the “Lucy” fossil skeleton, recently published an evaluation of the ecology and diet of early human ancestors in The Quarterly Review of Biology. “There’s very little evidence that any early hominids had very specialized diets or there were specialized food categories that seemed particularly important,” they concluded. Hunter-gatherers lived in a wide range of environments and ate a broad, opportunistic diet. As Sayers puts it, “Everyone would agree that ancestral diets didn’t include Twinkies, but I’m sure our ancestors would have eaten them if they grew on trees.”

The Paleo diet, Conrad adds, is not really the way people ate in the Paleolithic era, which began with the earliest known use of stone tools about 2.6 million years ago. “For several million years in the Paleolithic era, homo sapiens weren’t even around and fire had not been harnessed,” he says. “Early humans would likely kill an animal and consume copious amounts, then go long periods without food—we see this in the skeletal remains. Gluttony followed by starvation is not a healthy lifestyle.”

Moreover, the Paleo diet’s avoidance of some foods, such as dairy products, actually runs counter to human evolution—despite Cordain’s assertion that “the genome makeup of Paleolithic people is virtually identical to our own.” The mutation that allows most people to metabolize milk as adults (as opposed to lactose intolerance) arose independently at least seven times. Another evolutionary adaptation enabled humans to store more iron in the body, as people ate more of the lower-iron grains that the Paleo diet forbids.

HEALTHY IDEAS: Despite its dubious grounding in prehistory, the Paleo diet does have some healthy ideas, such as avoiding processed foods, sugar and salt and eating fruits and vegetables.

A few small, short-term studies have shown the Paleo diet improves glucose control in people with type 2 diabetes and cardiovascular risk factors in those with metabolic syndrome. Greater adherence to a Paleo diet pattern was associated with lower risk of incident, sporadic colorectal adenomas, which could lead to cancer. Overall, however, Jessica Larson of the USDA’s Center for Nutrition Policy and Promotion says, “At this time, there is not enough research on the Paleo diet and its potential impact over time.”

Conrad adds, “It is not consistent with current dietary recommendations. [See box.] And when people try to eat a Paleo diet, they tend to deviate even further away from what is recommended. It becomes a license to eat a lot of meat.”

GRASSFED BEEF OR GRUBS?: While meat is high in protein, most Americans already get plenty of protein in their diets. Too much protein with low carbohydrate intake can lead to an unhealthy metabolic state called ketosis.

Meat is also high in saturated fat, although saturated fat appears no worse for heart disease than carbohydrates. Whether the grass-fed beef recommended in the Paleo diet is really better remains a subject of debate. A review by researchers at California State University-Chico found that grass-fed beef is lower in saturated fat and higher in healthy fats, including omega-3s, and other beneficial nutrients.

Alice H. Lichtenstein, DSc, director of Tufts’ HNRCA Cardiovascular Nutrition Laboratory, says, “Even thought grass-fed beef might have higher levels of omega-3 fatty acids, the levels are low; hence, it’s not a good source of omega-3 fats.” Lichtenstein adds that she’s concerned that a reputation for healthfulness will make people believe grass-fed beef is better for you than it is, which could lead to overconsumption—as often happens in the Paleo diet.

A true Paleolithic diet, according to Garn and Leonard, would also include such meats as small mammals like moles, gophers, squirrel and rats, along with insect grubs and larvae.

GONE GRAINS: While cutting out some unhealthy ingredients, such as salt and sugar, the Paleo diet also avoids foods recommended by nutrition experts such as whole grains, legumes and dairy. “It demonizes whole grains,” says Conrad. “It’s certainly possible to consume a well-rounded diet without whole grains, but it’s difficult. By also cutting out legumes, the diet loses most complex carbohydrates.”

As for carbohydrates in the form of sugars, there’s little evidence that choosing “natural” sweeteners such as agave nectar, date sugar, honey or maple syrup, rather than sugar, has health benefits. All these sweeteners contain roughly the same amount of calories and affect the body similarly. Honey is actually higher in glycemic index than table sugar, so it could even be worse for weight regulation and diabetes risk. At least the Paleo diet promotes eating “unlimited amounts” of fruit, which have only been seen to be beneficial.

Fruits and vegetables endorsed by Paleo promoters are indeed good sources of nutrition, but most were not actually available to our Paleolithic forebears. Broccoli, for example, was not cultivated in its present form until about 2,000 years ago. Bananas have only been edible for about 3,000 years or less. Anthropologist Sayers notes, “The foods that we’re eating today, even in the case of fruits and vegetables, have been selected for desirable properties and would differ from what our ancestors were eating.”

ALL YOU CAN EAT: Limiting sodium from salt, while sound advice for controlling blood pressure, was not truly characteristic of the early human diet, either. As Garn and Leonard noted, “Although we think of early man as accustomed to a low-sodium intake, at least inland and at higher elevations, salt springs, salt outcroppings and salt caves were discovered by human beings early and were exploited or mined for millennia.… Some of our ancestors may have had a considerable sodium intake, even before salt was regularly used for the preservation of fish and meats.”

Most so-called Paleo diets don’t set any limits for calories; after all, our early ancestors often struggled to get adequate calories. In our calorie-rich modern world, however, failing to limit calories in any dietary regimen can lead to weight gain and obesity—key contributors to those “diseases of affluence.”

The true Paleolithic diet, while free of artificial preservatives and additives, may have been more “natural,” but it was also much less safe. Parasites would have been prevalent and stored food went bad.

“It is part of our intellectual tradition,” Garn and Leonard concluded, “to romanticize the past, both so-called Natural Man and an imaginary time in the past when people were presumably healthy and happy subsisting on unprocessed foods.” But that doesn’t necessarily add up to a sound nutritional strategy today. The “good old days” probably weren’t.