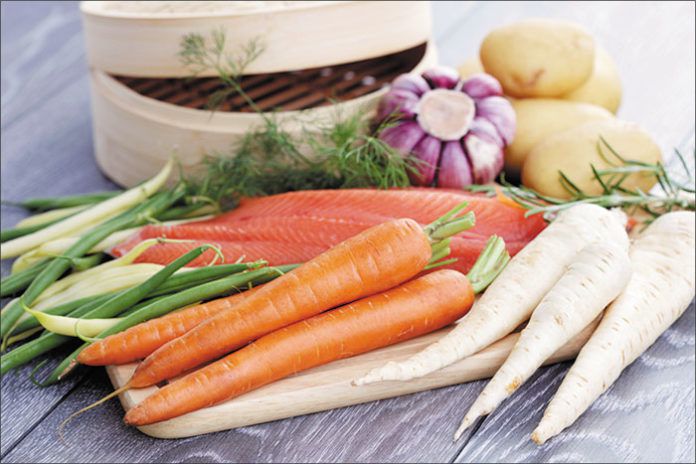 It may be time to dig out that seldom-used steamer basket, or the bamboo steamer your cousin gave you as a birthday gift that you never opened. Your cousin was right when she said steaming is a healthy way to cook—no added fat required, zero potential carcinogens from charring, and minimal loss of nutrients.

“Steaming doesn’t have to be boring,” says Diane L. McKay, PhD an assistant professor at Tufts’ Friedman School. “You can add flavors in the steaming liquid and by lining the steamer with fragrant additions. Or sprinkle with your favorite fresh or dried herbs for extra flavor and phytochemicals.” You can also top steamed food with creative, equally healthy sauces (see recipes at right).

PRESERVING CANCER PROTECTION: The latest evidence of steaming’s nutritional advantage comes from research at the University of Illinois on different ways of cooking broccoli. Like all cruciferous vegetables, broccoli is an excellent source of a plant compound called sulforaphane, which has shown anti-cancer properties in laboratory tests. But for sulforaphane to form, another broccoli compound must be present—an enzyme called myrosinase.

The University of Illinois scientists found that only when broccoli is steamed, for as long as five minutes, did it retain the myrosinase necessary to form the cancer-fighting sulforaphane. Boiling and microwaving broccoli, even for just one minute, destroyed the enzyme.

Those findings follow a 2008 study published in the Journal of Agricultural and Food Chemistry, which reported that steaming was the only cooking method to preserve glucosinolates—a group of cancer-fighting compounds in broccoli and other cruciferous vegetables. (One type of glucosinolate gets converted into sulforaphane.) In fact, steaming actually increased total glucosinolates by 30% compared to raw broccoli. Boiling and frying both led to substantial degradation of glucosinolates, with frying causing an 84% loss of these healthy compounds.

Another study found that steaming spinach and broccoli better preserved levels of folate, an important B vitamin. Even after nearly five minutes of steaming spinach and 15 minutes steaming broccoli, folate loss was negligible. Boiling the same vegetables, however, lost more than half the folate in each.

A 2009 Chinese study found that only steaming preserved the chlorophyll, vitamin C, soluble proteins and soluble sugars in broccoli that were lost in microwaving, boiling, stir-frying and stir-frying followed by boiling.
Broccoli is the most-studied vegetable regarding cooking methods and nutrient retention, but many other vegetables also benefit from a stint in the steamer. Good choices for steaming include cauliflower, artichoke hearts, asparagus and even beets and corn on the cob.

Steaming is also a healthy and traditional way to cook fish and shellfish, including mussels, shrimp, clams and lobster. The essence of the old-fashioned New England clambake, after all, is steamed shellfish and corn on the cob. You can even steam hamburgers, a favorite technique in Connecticut eateries.

IT’S COMPLICATED: The effect of cooking on the nutrients in foods is complex, however. Sometimes, as with the glucosinolates in steamed broccoli or the lycopene in tomatoes, cooking actually increases or releases nutrients. Research at Cornell University found that steaming or boiling many vegetables—including carrots, spinach, mushrooms, asparagus, peppers and cabbage—provides more antioxidants, such as carotenoids and ferulic acid, to the body than when those vegetables are eaten raw. Spinach needs only minimal cooking time for maximum nutrient availability, while its leafy-green cousin kale benefits from steaming for five minutes.

Some nutrients, such as water-soluble vitamin C and most B vitamins, are rapidly lost to boiling; steaming, because the food comes into less contact with the water, retains more of these vitamins. (One study found that microwaving preserved vitamin C better than either steaming or boiling.) Heat also destroys vitamin C by speeding the rate at which the vitamin reacts with oxygen in the air, so raw vegetables typically have even more vitamin C than steamed ones. But since vitamin C is so prevalent in our favorite fruits and vegetables, cooking is often worth the trade-off.

Other nutrients are fat-soluble, including vitamin A, vitamin D, vitamin E, vitamin K and carotenoids like beta-carotene and lycopene. So even if you steam your food to minimize the loss of these nutrients, some experts recommend tossing steamed vegetables in a little oil to help your body absorb these fat-soluble nutrients. That’s probably not necessary given the prevalence of fats and oils in a typical American meal; the oil in your salad dressing or the fat in that pork chop will also do the trick. If you do add a little oil to your steamed foods, however, make sure it’s heart-healthy mono- or polyunsaturated liquid vegetable oil such as olive or canola oil.

STEAMING TIPS: For easy and effective steaming, use a steamer set-up that keeps the food out of the water. Either metal baskets (which are placed in a pot to hold the food above the water) or bamboo steamers work well. If you opt for a metal basket, be sure to pick one that makes it simple and safe to handle near boiling water. Legs that are too short—less than an inch—won’t keep the contents out of the water. A basket that collapses for storage is handy, but you don’t want one so flexible that the food spills out when you lift it. (This can be a problem with silicone models.)

When arranging food in your steamer, you may want to start with a liner (but don’t completely cover the bottom) such as parchment paper or aluminum foil, to keep food from sticking. A liner will also keep the smell of fish from penetrating the wood in a bamboo steamer. You can opt for liners that add flavor, too, such as banana or cabbage leaves or corn husks, and add sprigs of herbs for another hit of flavor.

Arrange the tenderest or thinnest parts of your food (such as the tips of asparagus spears) toward the outside of the steamer, with the toughest, thickest parts in the middle where they will get more steam and heat, for even cooking. If you’re using a stackable bamboo steamer, put larger, more solid foods that take longer to cook in the bottom tray, closest to the heat source. Leave plenty of space around foods like fish so the steam can reach all of them.

You don’t have to be limited to just plain water as your source of steam. It’s easy to add herbs, spices or aromatic ingredients like garlic or shallots to the steaming water. Or you can replace the water entirely with broth.
When removing food from the steamer, be careful—escaping steam can quickly scald. The goal is to steam your food, not you!