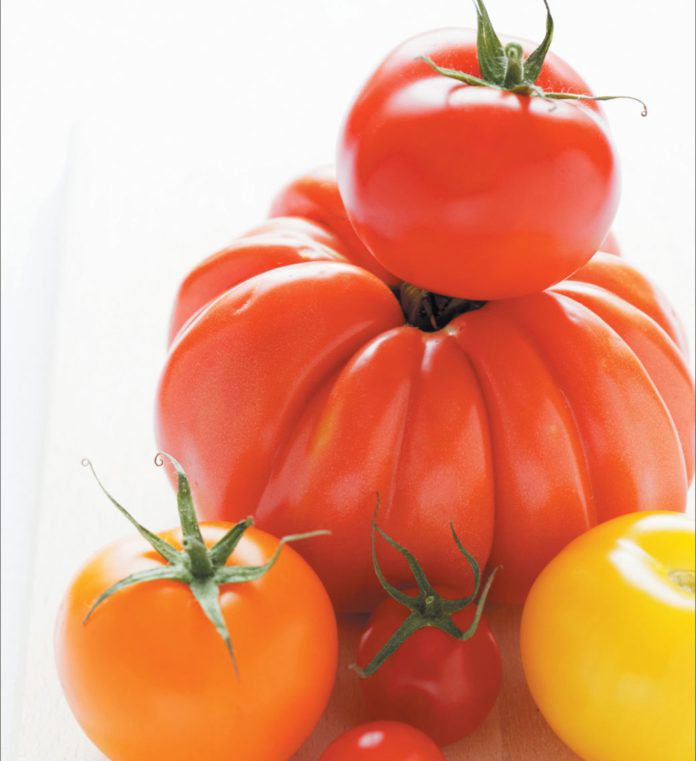 Tomatoes are so ubiquitous in the American diet, from the fresh tomatoes just now coming into prime season to countless processed products, that its hard to believe they were once commonly avoided as poisonous. Its true that tomatoes, like potatoes and peppers, belong to the nightshade family, and their leaves contain alkaloids that can indeed be toxic to pets. Europeans who saw the plants from the New World thought tomatoes resembled belladonna-deadly nightshade-and gave the fruit the forbidding name wolf peach.
Far from being poisonous, tomatoes are now known as one of the most healthy choices in the produce aisle. Though botanically a fruit (technically, a berry), tomatoes are popularly considered a vegetable. Whatever you call them, tomatoes provide more than 10% of your daily value (DV) of vitamin C, vitamin K, copper, potassium and manganese in a single cup, with only 30 calories. They score very low in the glycemic index, measuring how quickly a food boosts blood sugar. One cup of sliced raw tomatoes contains 2.2 grams of fiber-more than some breakfast cereals.

Tomatoes are also an important source of phytochemicals, says Diane L. McKay, an assistant professor at Tufts Friedman School, including the flavonols quercetin and kaempferol, which are found primarily in the skin, as well as the carotenoids beta-carotene and lycopene. Its hard to beat all that nutrient-dense goodness, and tomatoes are tasty, too!

Lycopene, an antioxidant carotenoid that gives tomatoes their rich red color and is the most prominent of their rich mix of phytonutrients, may also contribute to cardiovascular protection. High levels of lycopene in the blood were associated with a lower risk of stroke in men, McKay says, citing a 2012 Finnish study published in Neurology. That study followed more than 1,000 men, ages 46-65, for a little over 12 years. Men in the highest one-quarter of blood lycopene concentrations had a 59% lower risk of ischemic stroke (the most common kind) and 55% lower risk of any stroke, compared with those in the lowest group.

In another study, tomato juice consumption was also shown to reduce markers of inflammation in overweight and obese women, McKay adds. This is important because inflammation is associated with increased risk of chronic diseases related to obesity, i.e., cardiovascular disease and cancer. That 2013 study, published in the British Journal of Nutrition, also spotlighted lycopene as the key to reducing inflammation.

Lycopene may also improve cholesterol and triglyceride levels. By countering the aggregation of platelets in the blood, lycopene and other tomato compounds could reduce the risk of atherosclerosis (hardening of the arteries).

Tomatoes are the richest dietary source of lycopene, providing about 80% of the lycopene in the typical diet. Cooked tomatoes, including canned and other processed products, are actually a better way to get lycopene than raw tomatoes, because heat breaks down the cell walls and releases the lycopene. Because lycopene is fat soluble, combining tomatoes with a little olive oil or other healthy fat makes it easier for your body to absorb.

That study, reported in the Journal of Clinical Endocrinology and Metabolism, involved 70 postmenopausal women at increased breast cancer risk. After 10 weeks of a tomato-rich diet containing at least 25 milligrams of lycopene daily, concentrations of a hormone called adiponectin increased, especially among non-obese women. Higher adiponectin levels have been shown in prior studies to be associated with reduced risk of breast cancer.

Further evidence for lycopenes possible benefit against prostate cancer comes from a new study published in the Journal of the National Cancer Institute. Among nearly 50,000 male health professionals, researchers found those who consumed the most lycopene over a 23-year span had a 23% lower risk of lethal prostate cancer than those consuming the least. Previous results on lycopene and prostate cancer have been mixed; its possible, experts speculated, that lycopene protects only against the deadliest forms of the cancer.

Other studies have suggested that lycopene may help protect against cancers of the pancreas, stomach and lungs.

Tomatoes are also a good source of lutein and zeaxanthin, two other carotenoids, which have been associated with protection against age-related macular degeneration. One cup of canned tomatoes contains 48 micrograms of lutein plus zeaxanthin.

ARTHRITIS? ENJOY!: Are there any downsides to the healthy enjoyment of tomatoes and tomato products? You may have heard that arthritis patients should avoid tomatoes and other nightshade plants because they contain a chemical called solanine. According to the Arthritis Foundation, however, no formal research has ever confirmed that solanine contributes to arthritis pain. In fact, research published in Public Health Nutrition reported that people with high levels of lutein, found in tomatoes, were 70% less likely to have osteoarthritis.

Some people who suffer from gastro-esophageal reflux disease (GERD) may suffer an increase in heartburn symptoms when they eat acidic foods like tomatoes. And tomatoes generally beneficial potassium content may be of concern to patients on beta-blocker medication for heart disease, who need to consume high-potassium foods only in moderation.

If youre concerned about pesticides, the Environmental Working Group does list cherry tomatoes-but not other varieties-in its Dirty Dozen of most pesticide-prone fruits and vegetables. Choosing organic cherry tomatoes might therefore be a higher priority than going organic for other produce.
Nowadays, we know that the benefits of tomatoes far outweigh any negatives. Go ahead and enjoy wolf peaches without fear of being poisoned!