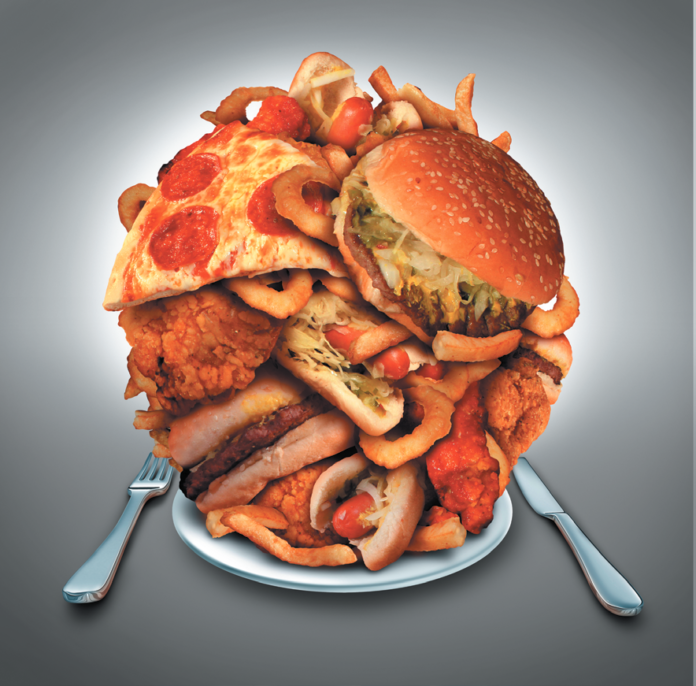 Humans eat for many reasons, and hunger is just one of them. Overeating contributes to excess weight gain, and subsequently cardiovascular disease, metabolic syndrome, diabetes, hypertension, and other problems. “Scientists have been working for decades to try to explain why we overeat,” says Emmanuel Pothos, PhD, an associate professor at Tufts Sackler School of Graduate Biomedical Sciences. Perhaps identifying the biological and psychological factors that contribute to overeating will lead to the discovery of an “off” switch that will make it a thing of the past. More likely, a combination of changes, at the personal, healthcare, and community levels, will be required to curb overeating.

The All-Controlling Brain: “Feeding is controlled by neurons in our brain,” says Dong Kong, PhD, a neuroscientist and assistant professor at Tufts University School of Medicine. “Hunger, fullness, and even some of our food preferences are initiated, controlled, and managed through the central nervous system.”

Scientists have known since the 1950s that a region of the brain called the hypothalamus is involved in the regulation of feeding. The hypothalamus works to keep the body in balance (homeostasis): as energy needs increase, the hypothalamus tells the body to increase energy (calorie)intake by eating. When enough calories have been consumed, the hypothalamus signals that eating should stop. “The problem with this ‘homeostatic model’ is that it does not adequately explain the current obesity epidemic,” says Pothos. “If homeostatic mechanisms of energy balance were controlling everything, one would expect the majority of the population to be at their ideal weight.” So what else is going on that impacts the brain’s efforts to keep things in balance?

Is it Hormones? “Humans evolved a very strong hormonal drive to seek and consume food,” says Anastassios G. Pittas, MD, MS, co-director of the Tufts Medical Center Diabetes and Lipid Center. “That served us very well throughout most of history when food was scarce. Today, food is abundant, but our bodies still have these robust food-seeking pathways.”

A hormone called ghrelin is sometimes referred to as the ‘hunger hormone.’ “Ghrelin is released by the stomach when the stomach is empty,” says Kong. “It travels in the bloodstream to the brain where it acts in the hypothalamus to stimulate appetite.” When administered to humans, ghrelin has been found to increase food intake by up to 30 percent. At the time of ghrelin’s discovery, it was hoped that finding a way to control ghrelin levels would be the key to taming overeating, but the body’s appetite regulation mechanisms are not so simple. Another hormone that stimulates feeding and calorie intake was identified recently, and it is quite possible that other mechanisms will be discovered in the future.

One hormone that opposes ghrelin is leptin, which inhibits appetite. “Leptin tells the brain to stop eating and start burning calories,” says Kong. “Leptin is secreted by fat cells. The more fat cells we have in our bodies, the more leptin should be signaling the brain to decrease appetite. Unfortunately, we find that leptin often doesn’t work in individuals with obesity. If we can solve this leptin resistance, perhaps we can cut down on overeating.”

Another hormone that has gotten attention with respect to overeating and weight gain is insulin. “There is no question that overeating leads to obesity, which leads to insulin resistance [a lack of normal response to circulating insulin],” says Pittas. “Whether insulin resistance leads to overeating is a very complicated topic.” Insulin is responsible for getting the body’s main fuel—glucose—out of the bloodstream and into the cells to provide energy. “It also acts in the central nervous system to indicate it’s time to stop eating,” says Pittas. “People who are insulin resistant may lose that satiety effect, which leads to overeating. More significantly, the body secretes more insulin in an effort to overcome insulin resistance. Research from our group suggests that a diet high in refined carbohydrates and added sugars in the setting of this hypersecretion of insulin leads people to eat more. Two to three hours after a meal high in refined carbohydrates, all that insulin causes blood sugar levels to drop, which is a robust signal for eating. So we end up with a vicious cycle: overeat, gain weight, become insulin resistant, secrete more insulin, overeat—and round and round.”

Hormones released in times of stress are also related to appetite, meaning that “stress eating” does have some biological basis. In immediate short-term stressful situations, levels of epinephrine (adrenaline) rise, putting the body into “fight-or-flight” mode and dampening appetite. But if stress continues, another hormone, called cortisol, is released. Cortisol increases appetite.

Is It Food Addiction? “One reason we overeat is because food can stimulate the reward system in our brains,” says Sai Das, PhD, a scientist in the Energy Metabolism Laboratory at the Human Nutrition Research Center on Aging. “If eating particular foods makes us feel good, we are more likely to want more. While from an evolutionary standpoint this may have helped us remember where the berries grew or motivated us to hunt, in today’s environment of easily-accessible food, it could be leading to overeating.”

Pothos has done extensive animal research on food and the body’s reward system. “A dominant theory in the 1990s that is still popular today is the concept that food can have addictive qualities,” says Pothos. The neurotransmitter dopamine, which is known to play a role in drug addiction, has been studied for a possible connection to overeating. “Brain imaging studies in humans with obesity have shown dopamine receptors to be deficient,” says Pothos. “This suggests that people may overeat in an effort to compensate by stimulating more dopamine release.” Pothos has clearly demonstrated a link between deficient brain dopamine and overeating in rats and mice, and research in humans is ongoing.

“In rats that have been previously exposed to high calorie, high-fat, high-refined-carbohydrate foods, these foods stimulate dopamine release, but normal nutritious rat-chow does not,” says Pothos. “The animal seeks out palatable food to boost low dopamine levels and try to derive pleasure from eating.” Too few studies have been done to conclusively identify specific foods or ingredients capable of triggering an addictive-like response in humans.

Dopamine is unlikely to be the only brain chemical involved in overeating. “It is likely that a combination of chemical effects leads to overeating,” says Pothos.

Other Factors: Large portions, constant access to highly palatable foods, stress, mealtime distractions, and memories of pleasurable eating experiences are just a few of the many factors that contribute to satiety override—ignoring (or even being unaware of) the body’s signals that we have consumed enough fuel to keep us going. “Research has shown that external cues impact our eating behavior,” says Alice H. Lichtenstein, DSc, Gershoff professor of nutrition and policy at the Friedman School. “People tend to eat more when larger portions are in front of them, when they are offered a large variety of foods (think buffet), or when they eat mindlessly while focusing on electronic devises or the TV.”

We also know that lack of sleep can impact food intake. A recent systematic review published in the Journal of Sleep Research found that increases in the length of sleep time were associated with improved measures of insulin sensitivity and reductions in appetite, among other factors. “Another reason we overeat may be that we have extended our waking hours, which increases our window of eating opportunity,” says Das.

What to Do: While the lack of a clear biological target for medications and the range of factors that contribute to overconsumption may seem discouraging, there are things we can do to help keep our eating in check. “What works for one person may not work for someone else,” says Pothos, “but there are a number of things we can try to curb overeating.” Being vigilant about portion sizes, avoiding distractions while eating, getting at least seven hours of sleep a night, and choosing a healthy dietary pattern low in highly-palatable low-nutrient foods are all strategies that may help cut down on overeating. “Finding healthy, non-food ways to stimulate the brain’s reward center (such as with exercise) may help if dopamine deficiency is an issue,” says Pothos.

These tips may help to curb overeating:

–Focus on NUTRITIONAL quality of food. Highly-processed foods may be more likely to trigger craving and overeating.

–Avoid distractions. Focus on the food you’re eating and slow down to increase odds of recognizing when you’ve had enough.

–Don’t get too hungry. It may be harder to control food intake and choices when the body’s systems are all screaming for food.

–Address stress. Look for ways to cut down on exposure to stressful situations. Try stress-reducing techniques such as meditation and exercise to cut down on stress eating.

–Avoid temptation. Fill your pantry with healthy choices that you enjoy, not highly-palatable highly-processed junk food.
–Listen to your body. Eat when you are hungry and stop when you are satisfied.

–Get enough Sleep. Ensure you get at least seven hours a night.