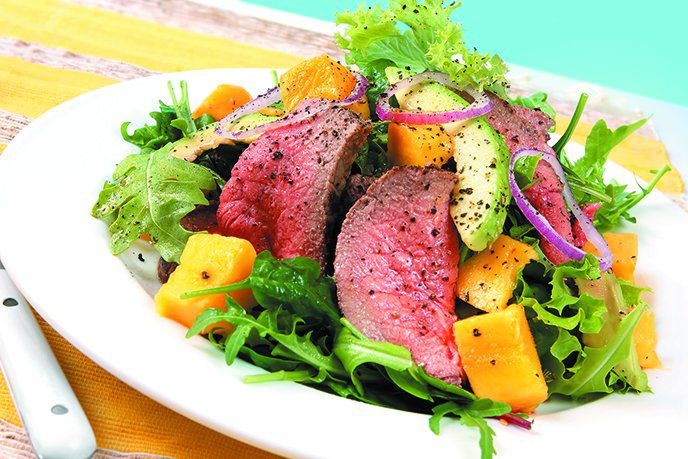 You don’t have to give up meat, but you should eat it sensibly. Follow these guidelines to help you get started on a preventative Alzheimer’s diet by lowering your consumption of red meats:

1. Limit red meat to fewer than four servings (3ounces each) per week, preferably lean cuts. Examples of red meat are beef, pork, bison, lamb, goat and game meat, such as elk and venison.

2. Lean cuts are often signaled by the words “loin” and “round,” such as sirloin steak from beef, eye of round roast from elk and tenderloin cuts from pork, venison or lamb.

4. Use smaller amounts of meat as an ingredient in dishes rather than the focal point of the meal. For instance, use a bit of meat in vegetable-rich soup, stir-fry dishes or to top a salad.

5. If using dry-heat cooking (such as grilling, broiling, roasting, searing, stir-frying or pan-frying), marinate meat in something acidic, such as with lemon juice or vinegar, for one hour before cooking to help reduce AGEs formation.

6. Use moist-heat cooking methods for meat and poultry more often, such as stewing and steaming (for example, by wrapping meat in parchment paper). This results in less formation of AGEs.

What is the Alzheimer’s Diet?

You’ve heard time and again that it’s not wise to eat too much red meat, especially if processed, since higher intakes are linked with increased risks of obesity, cardiovascular disease, type 2 diabetes and several cancers. A growing number of studies suggest dietary patterns high in meat may promote cognitive decline, too.

“There is strong evidence that a typical Western diet, which is rich in meat, high-fat foods and sweets, increases the risk of developing dementia, including Alzheimer’s disease,” says Tammy Scott, PhD, an assistant professor at the Friedman School and a scientist in Tufts’ HNRCA Neuroscience and Aging Laboratory. Observational research has tried to pinpoint which components of Western diets are the biggest contributors to increased risk of Alzheimer’s disease, but these data do not represent “cause and effect” and therefore should be interpreted with caution.

Does Red Meat Cause Alzheimer’s Disease?

Red meat made headlines recently as a food that may raise Alzheimer’s disease risk. These news stories were based on a study published in the Journal of the American College of Nutrition. The analysis included 10 countries: the United States, Brazil, Chile, Cuba, Egypt, India, Mongolia, Nigeria, Republic of Korea and Sri Lanka.

Assessed was the per capita food supply of these countries in the five-, 10- and 15-year periods leading up to a diagnosis of Alzheimer’s disease. A higher per capita country-wide supply of meat and other animal products (except milk) in the five years prior to diagnosis had the strongest association with Alzheimer’s disease risk. However, it’s important to realize such research cannot pinpoint which segments of the populations were eating the most meat and other animal products, or of those who were, whether they were the ones that had the highest rates of Alzheimer’s disease.

What’s the Link Between Meat and Dementia?

Although plant foods also contain copper and iron, these minerals are much better absorbed from meat, so people may get more than they need if they over-consume meat. Notably, levels of heme iron (a more absorbable form) are 8 to 10 times higher in red meat than in poultry. “This may contribute to excess intake of these essential minerals since people also may ingest them in dietary supplements and as contaminants in drinking water, such as from plumbing,” Scott says. “Genetic variations in a person’s ability to metabolize these minerals may also contribute to higher levels.”

Another consideration: Cooking foods rich in fat and protein, such as meat, at high temperatures and for prolonged periods using dry heat methods, such as grilling, broiling or frying, can increase the formation of advanced glycation end products or AGEs. Preliminary data suggest higher levels of AGEs in the brain of individuals with Alzheimer’s disease may promote oxidative stress and inflammation.

In contrast, plant-based foods, such as vegetables, fruits, legumes and whole grains, contain relatively few AGEs, even after cooking. These are the same types of foods that are linked with lower risk of Alzheimer’s disease and that are more environmentally friendly than meat, making them good choices. So, the best approach is to enjoy these plant foods often as part of your eating pattern balanced with fish, skinless poultry and smaller quantities of lean meat.

For more information, see: Fish Linked to Less Alzheimer’s Disease in Those Most at Risk.

TO LEARN MORE: Journal of the American College of Nutrition, July 2016 –