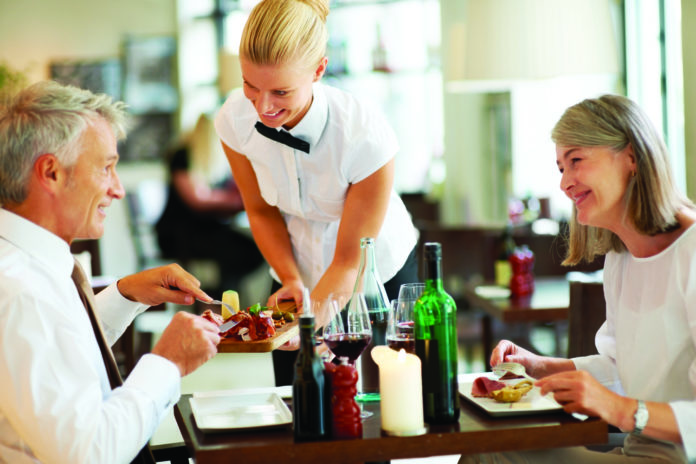 If you think you can avoid unhealthy restaurant fare by skipping nation-wide chain restaurants for smaller local eateries, a new Tufts study has a wake-up call for you. Researchers analyzed meals from independent and small-chain restaurants, and found that the average meal contained two to three times the estimated calorie needs of an individual adult at a single meal and 66% of typical daily calorie requirements.

These comparative findings suggest that both non-chain and chain restau-rants contribute to the obesity epidemic, which is making people unhealthy and has a huge impact on health care costs, says senior and corresponding author Susan B. Roberts, PhD, director of Tufts HNRCA Energy Metabolism Labora-tory and author of The i Diet

The findings come as the restaurant industry prepares to implement new federal rules requiring chains with 20 or more locations to post calorie content information. Those rules wont affect the sort of establishments tested in the Tufts study, which nonetheless account for half the nations restaurant locations.

COUNTING THE CALORIES: In the study, published in JAMA Internal Medicine, researchers analyzed 157 full meals, including side dishes, from 33 randomly selected independent or small-chain restaurants within 15 miles of downtown Boston. All the restaurants had an online menu but did not provide nutritional in-formation. Researchers collected samples from the most popular food choices in the nine most common restaurant types: Mexican, American, Chinese, Italian, Japanese, Thai, Indian, Greek and Viet-namese. Specific meal items selected for the study were identified based on cus-tomer rankings and from web searches for popular foods.

Calorie counts were determined using the bomb calorimetry method, a more accurate way of calculating a foods energy content than simply adding up the calories from its protein, carbs and fat quantities. Bomb calorimetry actually measures the heat released when food is combusted.

On average, the meals studied contained 1,327 calories, which signifi-cantly exceeds the estimated energy needs of an individual adult at a single meal, says Roberts. Meals from all restaurant types provided substantially more energy than is needed for weight maintenance.

HIGHEST TO LOWEST: Nearly three-quarters (73%) of the meals analyzed contained more than half the daily rec-ommended 2,000 calories for an average adult, and 12 meals topped the 2,000-cal-orie mark. Categories delivering the most average calories were Italian (1,755 calories), American (1,494) and Chinese (1,474). The lowest averages were from Vietnamese (922 calories) and Japanese (1,027) meals.

The average calorie counts from the independent or small-chain restaurant meals were similar to those of equiva-lent meals in the largest national chain restaurants.
On average, the meals tested contained 1,437 calories, com-pared to an average of 1,359 calories as self-reported by larger national chain restaurants.National recommendations for the prevention and treatment of obesity stress individual self-monitoring of food consumption, says first author Lorien Urban, PhD, a postdoctoral scholar in the Energy Metabolism Laboratory. But there is little available information on the energy content of foods offered by restaurants that are not required to post nutrition information.

Given that an imbalance between energy intake and energy expenditure of only 100 calories per day can lead to a weight gain of between 6 and 15 pounds per year, Urban continues, our find-ings suggest that routine reporting of meal calorie content by all restaurants, not just large chains, would encourage individuals to make informed choices about their diet and would discourage restaurants from offering unhealthy portions.