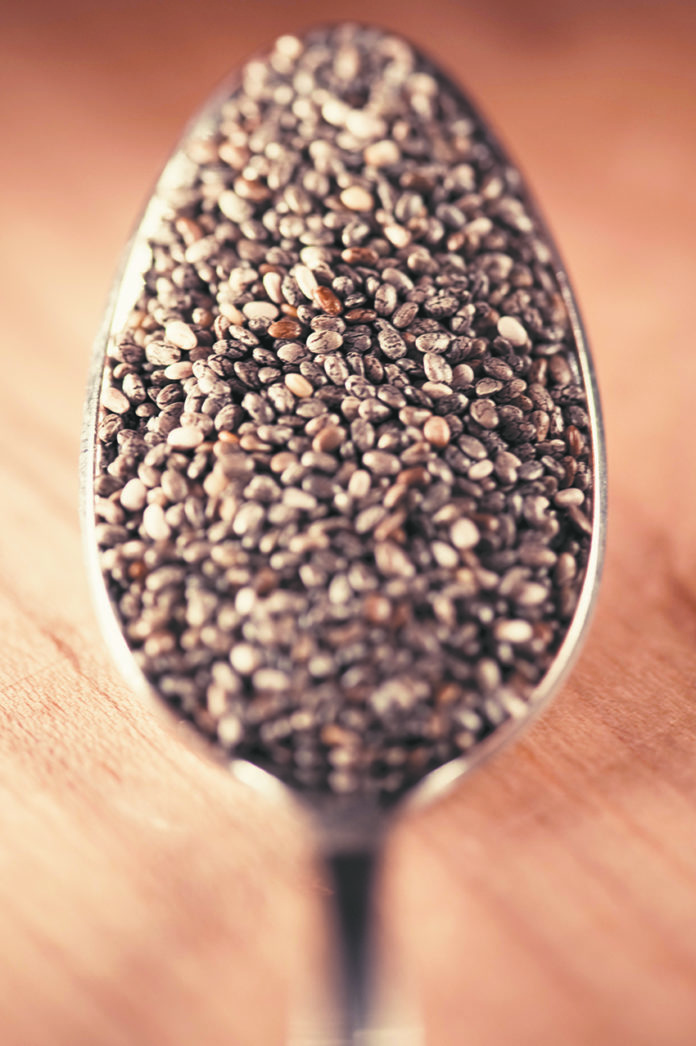 Thirty years after Chia Pets (“the pot-tery that grows”) became a fad, the chia plant is popular once again—for the nutritional power of its tiny seeds. More than 100 products containing chia seeds have been introduced, from cereals and snacks to juice drinks, and it’s being touted as “the ultimate superfood.”

Marketing hype aside, it’s true that chia seeds have been known as a nutritious food since the heyday of the Aztecs. They’re high in fiber and protein, rich in antioxidants, and packed with alpha-linolenic acid (ALA), the plant form of omega-3 fatty acids that have similarly made flax seeds so popular with health-conscious consumers. Unlike flax seeds, however, chia seeds don’t quickly go rancid.

Most people who’ve joined the chia craze add the tiny seeds to other foods — sprinkling on yogurt or baked into cookies, for example — or consume chia products in addition to their regular diet. Alice H Lichtenstein, DSc, director of Tufts’ HNRCA Cardio-vascular Nutrition Laboratory, cautions, “Unless you’re substituting chia seeds for other foods, you’re adding 60 calories per tablespoon, which could outweigh any of the seeds’ much-hyped health advantages.”

LIMITED EVIDENCE: Moreover, it’s unclear how much of the ALA in chia seeds gets converted in the human body to the heart-healthy omega-3s found in fish, EPA and DHA. Research on flaxseed has found the conversion of ALA to EPA/DHA very inefficient, though results have varied.

Scientific evidence for the health benefits of chia seeds is scanty, according to a new review published in the Journal of Biomedicine and Biotechnology. In animal testing, rats who were fed chia seeds saw significant reductions in LDL (“bad”) cholesterol and triglycerides, while blood levels of HDL (“good”) cholesterol and omega-3s increased. The mechanism for such effects is unknown, as EPA and DHA do not reduce LDL cholesterol, Lichten-stein points out.

The review cites only four clinical trials in humans. The largest of those, testing 25 grams of chia seeds daily versus placebo in 76 subjects over 12 weeks, found no significant benefits in weight loss or disease risk, although blood levels of ALA increased. Another randomized trial tested a beverage contain-ing a combination of chia seeds, soy protein, oats and nopal (cactus) versus placebo in 67 patients with metabolic syndrome. After two months, those assigned to the tested beverage lost weight and improved triglyc-eride and blood-sugar levels. Other small trials showed reduced post-meal glucose levels and elevated ALA and EPA levels.

The review concluded, “Studies of chia’s intake in human diet which take into consideration factors such as lifestyle and genetic variations are still limited. Hence, studies which target these factors should be done in the future.”It’s a little premature, in short, to anoint chia seeds as “the ultimate super-food.”

SEED SMARTS: What exactly are chia seeds? They come from a plant in the mint family (Salvia hispanica L.) cultivated in Central and South America; the seeds were once a major food source for people in Mexico and Guatemala. In health-food stores and high-end supermarkets, you’ll find two varieties of chia seeds — creamy white and gray-black — which can be used interchangeably. Brown chia seeds are not fully mature.

Gluten-free, chia seeds may especially appeal to those with celiac disease, who cannot tolerate gluten. People with aller-gies to nuts can consume chia seeds as an alternative. Because of the high fiber and protein content, advocates maintain, the seeds could be filling and make you feel full longer—hence the weight-loss claims. Because the seeds are essentially flavorless, advocates say, there’s nothing not to like.

The seeds also have the unusual property of forming a sticky, gelatinous coating when exposed to liquid. That’s how they bond to terra cotta, growing into fuzzy green “pets” that mimic the shape of the pottery. But that property also makes them useful as a vegan, cho-lesterol-free alternative to eggs, because they serve as a binding agent. According to chia boosters, one tablespoon of chia powder dissolved in a quarter-cup of water substitutes for one egg. (Note that this has not been tested by our recipe expert.)

Some evidence suggests that consuming milled chia seeds, rather than whole seeds, allows significantly more ALA to reach the bloodstream and results in a higher conversion to EPA.