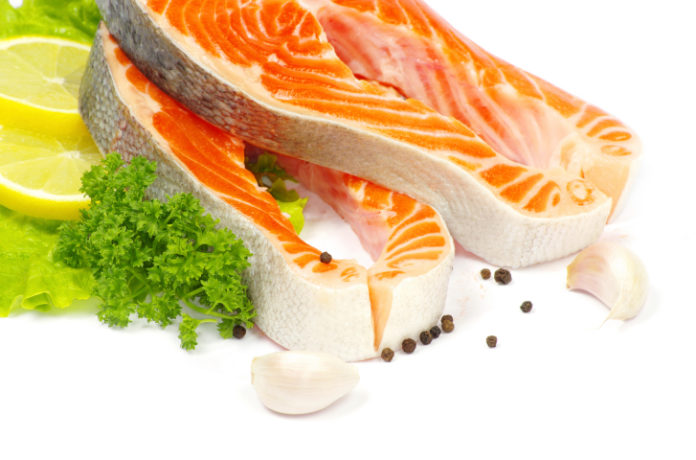 Does eating fish help protect your brain? Previous studies of the brain effects of the omega-3 fatty acids found in fish oil have been inconsistent, possibly because theyve relied on food-frequency questionnaires that require subjects to recall what they ate. So researchers in a new study took blood samples from 1,575 participants in the long-running Framingham Offspring cohort, average age 67, to measure levels of the key omega-3s in fish (EPA and DHA). These were then compared to performance on cognitive tests and MRI scans of the brain.

Participants with the lowest omega-3 levels scored significantly worse on tests of visual memory, executive function and abstract thinking than those in the top three-quarters of omega-3. Only scores on verbal-memory tests did not correlate with omega-3 levels. Lower blood levels of omega-3s were also associated with smaller brain volumes-equivalent to about two years of structural brain aging, scientists concluded.

This cross-sectional study provides yet more evidence that consumption of omega-3 fatty acids may be beneficial to cognitive health and aging, comments Tammy Scott, PhD, an assistant professor at the Friedman School and scientist at Tufts HNRCA Nutrition and Neurocognition Laboratory. Although results from randomized clinical trials evaluating the effect of omega-3 supplementation on cognition are not entirely consistent, there appears to be little to no benefit in established cases of Alzheimers disease. But results appear to be more promising in individuals with milder forms of cognitive impairment such as age-related cognitive decline.

Zaldy Tan, MD, of UCLAs Easton Center for Alzheimers Disease Research and Division of Geriatric Medicine, and colleagues from Boston University reported their findings in the journal Neurology. They cautioned that the study was only a snapshot and didnt track participants brains over time, but concluded, We feel that omega- 3s reduce vascular pathology and thus reduce the rate of brain aging.

Add improved blood-vessel function to the possible health benefits of the omega-3 fatty acids found in fish oil. A new meta-analysis of 16 prior studies totaling 901 participants found a small but significant improvement in flow-mediated dilation (a measure of a healthy blood vessels ability to relax) associated with omega-3 supplementation. The amounts in the supplements ranged from 0.45 to 4.5 grams per day; at the lower and medium ranges of omega-3s, the blood-vessel benefits increased as the doses increased. Only people with cardiovascular disease or its risk factors benefited, researchers noted, possibly because healthy participants already had sound blood-vessel function. The mechanism by which omega-3s might boost blood-vessel functioning isnt known, but scientists pointed to studies showing omega-3s might reduce inflammation and cell damage.

TO LEARN MORE: Atherosclerosis, April 2012; abstract at dx.doi.org/10.1016/j.atherosclerosis.2012.01.006. The study couldnt determine how much fish or other sources of omega-3s participants consumed to reach specific blood levels of DHA and EPA. Theres no universally accepted target for omega-3s in the blood, Dr. Tan added, and the test used in the study isnt commercially available.

The latest federal Dietary Guidelines for Americans recommend consuming at least two servings of seafood a week, especially varieties high in omega-3s such as salmon, anchovies, herring, sardines, trout and Atlantic and Pacific mackerel. Most of the evidence for omega-3s health effects focuses on cardiovascular benefits, however.

As for the brain, Tufts Scott adds, There is limited information, but one study found that participants who consumed fish once per week or more had 60% less risk of Alzheimers disease. Another study found that consuming three or more fish meals per week was protective against subclinical cerebrovascular disease.

If you dont like to eat fish, should you take fish-oil capsules? Scott replies, Always check with your doctor before starting any dietary supplementation.