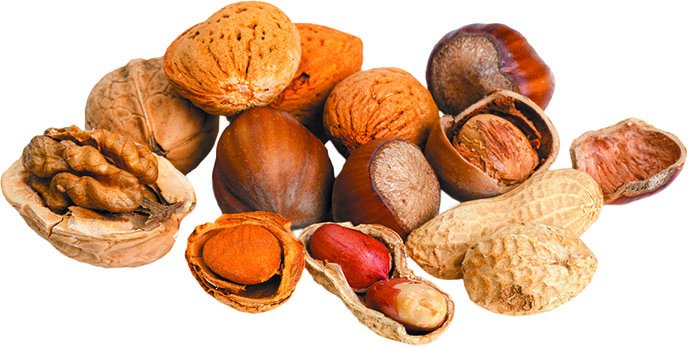 If you grew up thinking of nuts as a not-very-good-for-you indulgence, there’s a growing pile of evidence that should change your mind about these healthy foods.

“For a long time, consumers thought that coffee raises blood pressure, eggs cause heart disease, chocolate is an unhealthy treat, and nuts make you fat,” says Jeffrey Blumberg, PhD, director of Tufts’ HNRCA Antioxidants Research Laboratory. “However, such conclusions were often based on very little science and several mistaken assumptions.”

The latest news in nuts’ rehabilitation comes from two studies spotlighting the heart-health benefits of almonds and peanuts.

EXTENDING THE EVIDENCE: Among prior observational studies showing the health benefits of nuts are the Health Professionals Follow-Up Study and the Nurses’ Health Study, which linked nut consumption to a lower risk of mortality, especially from cancer and heart disease. Most such studies, however, have focused primarily on whites from upper socioeconomic levels.

One new study, led by Vanderbilt University researchers and involving more than 200,000 people in the American South and in Shanghai, helps broaden the evidence for nuts’ health effects. The study populations included varied ethnicities and came predominantly from lower socioeconomic groups. Many had serious risk factors for premature death, including smoking.

“The results from this study are consistent with a fairly large body of evidence but are of some novelty because of the cohorts examined,” Blumberg notes.

LOWER HEART RISK: Researchers followed US participants for an average 5.4 years and two Shanghai groups for 6.5 and 12.2 years, during which a total of 14,440 deaths were identified. Questionnaires were used to measure nut consumption among US participants (50% of whose nut intake consisted of peanuts) and peanut consumption among those in Shanghai. (Although peanuts are actually a legume and not a tree nut, their nutritional profile and health effects closely resemble true nuts such as walnuts, almonds and cashews.)

After controlling for more than two-dozen other health variables, researchers calculated that those in the highest one-fifth of nut consumption had a 21% lower mortality risk in the US study than those who ate the least. Among the Shanghai participants, those eating the most peanuts were at 17% lower risk.

This inverse association was predominantly driven by cardiovascular disease mortality. Across ethnicities, those eating the most nuts were 30%-40% less likely to suffer heart disease. Among Asians, peanut consumption was also associated with a reduced risk of stroke. The results were published in JAMA Internal Medicine.

ALMONDS VS. CHOLESTEROL: One way in which nuts might help prevent cardiovascular disease is by improving blood cholesterol levels. A second new study, published in JAMA, tested the effects of almonds on cholesterol in 48 healthy volunteers during two carefully controlled six-week feeding experiments. The only difference between the diets was the daily snack provided: either 1.5 ounces of unsalted whole almonds (about 250 calories) or a banana muffin with some butter (about 270 calories).

The controlled diet was apparently healthier than what participants normally ate, as cholesterol levels and waistlines improved on both regimens. But all measures improved more during the almond intervention, including an average 18 mg/dL drop in non-HDL cholesterol. Results for the apoB lipid test and cholesterol ratios also improved more on the almond regimen. Although weight and body mass index didn’t change, waist circumference was reduced about 0.8 inch in the almond intervention, double the muffin alternative.

Nuts are relatively high in calories, although some research suggests that not all those calories are actually absorbed by the body. It’s nonetheless smart to substitute nuts for other, less-healthy snacks, salad toppings and other choices, rather than adding a handful of nuts to your daily diet. (See Smart Switches Above Right.)

If you don’t prefer almonds or peanuts, Tufts’ Blumberg says it’s OK to follow your taste buds, and a mix of different nuts may be even better. “While there are nutritional differences between nuts, their similarities are more important,” he explains. “These include being rich in good fats, protein, fiber and vitamin E and low in carbs. Dietary variety is always better than monotony as it helps you achieve a broader array of nutrients and phytochemicals.”

For more on the health benefits and nutritional content of nuts, see our May 2012 Special Supplement.

– Instead of snacking on potato chips or corn chips, grab a handful of nuts.
– Instead of croutons, give your salads extra crunch with your favorite nuts.
– Instead of more meat, add protein and variety to stir-fry dishes with nuts. Cashews and peanuts are traditional choices, but almonds, walnuts and even macadamias work as well.
– Instead of jimmies or other candy, top ice cream or yogurt with a sprinkling of nut pieces.
– Instead of grated cheese or sauce, give vegetables like broccoli, asparagus and green beans a flavor and texture boost with nuts.