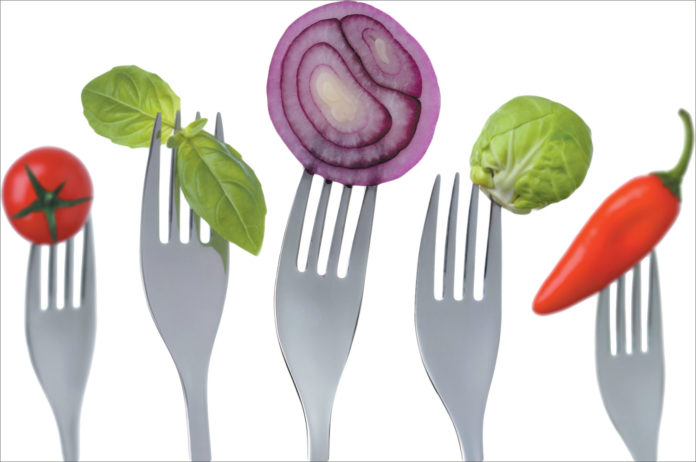 “There are a number of reasons to maintain a relatively high intake of fruits and vegetables,” says Alice H. Lichtenstein, DSc, director of Tufts’ HNRCA Cardiovascular Nutrition Laboratory. “First, they tend to be low in calories and high in nutrients. Second, they tend to crowd out less-healthy foods during meals and at snack time. Third, eating lots of fruits and vegetables tends to be related to other health behaviors such as engaging in regular physical activity and avoiding tobacco products.”

MORE IS BETTER: One new finding, an English observational study of more than 65,000 adults over 7.7 years, found a “robust association” between fruit and vegetable consumption and all-cause mortality, including cardiovascular and cancer risk. The greatest benefits were seen in people eating seven or more servings of produce daily: Compared to people eating less than one daily serving, those consuming the most fruits and vegetables were 33% less likely to die of any cause during the follow-up period. Their risk of death from cardiovascular disease was 31% lower and risk from cancer was 25% less.
Slightly greater benefits were associated with vegetables than with fruit, and benefits of eating more than three or four daily portions of fruit were limited. When the findings were further analyzed, reduced mortality was associated with consuming salad, fresh fruit and dried fruit. Canned and frozen fruit were actually linked to increased mortality. Researchers noted that canned fruit often contains high amounts of sugar. Frozen fruit, however, is generally considered as nutritious as fresh; it’s possible that people eating more frozen fruit didn’t have as much access to fresh produce, so frozen-fruit consumption was actually a marker for other dietary habits.

In any case, Oyinlola Oyebode, MD, of University College London, and colleagues say more is better when it comes to produce. “We all know that eating fruit and vegetables is healthy, but the size of the effect is staggering,”

Dr. Oyebode commented, adding, “People shouldn’t feel daunted by a big target like seven servings. Whatever your starting point, it is always worth eating more fruit and vegetables.… Even those eating one to three portions had a significantly lower risk than those eating less than one.”
The findings were published in the Journal of Epidemiology and Community Health.

WOMEN’S HEART HEALTH: In the second study, presented at an American College of Cardiology meeting, the Coronary Artery Risk Development in Young Adults (CARDIA) study linked produce consumption to a lower risk of developing coronary atherosclerosis in women. The study was designed to evaluate the long-term effects of lifestyle and diet on heart disease, and started with 2,648 men and women ages 18-30. They were assessed 20 years later for coronary artery calcification.

Women in the one-third of participants who consumed the most fruits and vegetables – an average of 8.8 daily servings – were about 40% less likely to have any coronary plaque compared with those consuming the least (3.3 servings).

“We know that lifestyle behaviors are really the foundation of cardiovascular-disease prevention,” said lead investigator Michael Miedema, MD, of the Minneapolis Heart Institute. “As your fruit and vegetable intake goes up, your relative risk for developing coronary heart disease goes down. It’s been seen in several other studies, but it’s been most consistent in women.”

Indeed, the new study failed to find a similar benefit in male participants.

Researchers suggested that because the study population included just over 1,000 men, it may have been underpowered to detect an association. There is no plausible biological reason, Dr. Miedema said, why men should not also see a reduction in heart disease from consuming more fruits and vegetables.
Tufts’ Lichtenstein adds one cautionary note: “The emphasis should be on consuming fruits unadorned with added sugar and vegetables unadorned with cheesey sauces.”