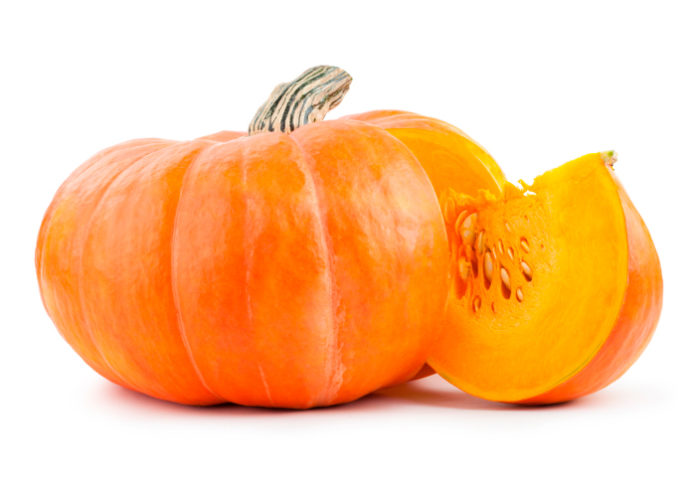 Carve out a place in your diet for nutritious pumpkins.

If your only annual encounters with pumpkins are carving a Halloween jack-o-lantern and gobbling a Thanksgiving pie, you’re missing out on a nutritional bargain. Nutrient-dense, these stars of autumn holidays deliver a modest amount of protein and fiber, a mix of essential minerals, vitamins C and E, and especially beta-carotene, which is a form of vitamin A-with only 49 calories in one cup of cooked pumpkin.

Botanically a fruit, the pumpkin is a type of winter squash and part of the gourd family. Its name, however, comes from the Greek for large melon (pepon). Pumpkins are originally from the Americas, where colonists who learned about them from Native Americans who cooked a sort of inside-out pumpkin pie by filling the gourds with milk, spices and honey and then baking in hot ashes. Pumpkins had arrived in Europe by the time of Shakespeare, who refers to a pumpkin in The Merry Wives of Windsor. Early on, pumpkin was recognized as good for you, supposed to treat everything from freckles to snake bite.

The US produces some 1.1 billion pounds of pumpkins annually, valued at more than $140 million.

The top pumpkin-producing states are Illinois, Ohio, Pennsylvania and California.

More than 90% of the pumpkins grown for processing as canned pumpkin in the US come from Illinois. Today, says Elizabeth Johnson, PhD, a scientist in Tufts HNRCA Carotenoids and Health Laboratory, The key to a healthy diet is diversity within a food group and among the food groups. While there is no one food that will contain all the nutrition one needs, pumpkins should be considered a part of a healthy diet.

A typical pumpkin is 90% water, but a cup of cooked pumpkin still has room for 2 grams of protein and 3 grams of fiber. Carbohydrates total 12 grams per cup-an important consideration for diabetics and others watching their carb intake. Just one cup of cooked pumpkin contains 564 milligrams of potassium-more than a banana and almost an eighth of what you need in a day. Pumpkin also provides copper, manganese, zinc, iron, selenium and magnesium. One cup contains 19% of the Daily Value for vitamin C, 11% of riboflavin and 10% of vitamin E.

The orange color of pumpkins is a tip-off that, like carrots, they are stellar sources of beta-carotene, which your liver can convert to vitamin A. That one cup of cooked pumpkin packs a whopping 5.125 milligrams of beta-carotene. Best obtained from your diet rather than supplements, beta-carotene from foods like pumpkins may reduce the risk of breast cancer in premenopausal women, especially those at higher risk, and of ovarian cancer after menopause. Although it doesn’t prevent arthritis, dietary beta-carotene may keep the condition from getting worse. Some evidence suggests beta-carotene from food improves physical performance and strength in the elderly.

Pumpkin is also rich in other carotenoids, lutein and zeaxanthin, associated with eye health and reduced risk of cataracts and age-related macular degeneration.

Even if your pumpkins are destined for your plate rather than your front porch as jack-o-lanterns, now is the time to buy them: 80% of the US pumpkin supply is available in October. Pick pumpkins that are firm and heavy for their size, with a deep orange color. Good pumpkins for eating, rather than carving, tend to be smaller-about the size of a cantaloupe, weighing two to five pounds-and may be labeled as sugar or pie pumpkins. Popular eating varieties include Autumn Gold, Baby Pam, New England Pie and Small Sugar. Kept in a cool, dark place, a whole pumpkin will keep up to two months.

Halve the pumpkin from top to bottom and scrape out the seeds and fibrous matter inside-saving the seeds, which are nutritional standouts on their own (see box). You can cut the pumpkin into smaller cubes for faster cooking, roasting along with onions and other vegetables or incorporating into chilis and stews.

Save those pumpkin seeds for a nutritious snack, topping or granola ingredient.

Pumpkin seeds (pepitas) are high in protein, manganese, magnesium and phosphorus and contain heart-healthy mono- and polyunsaturated fats. A quarter-cup contains 190 calories (including oil for toasting), though, so enjoy in moderation.

Pureed in a blender or food processor, pumpkin becomes a base for soup, waffles, pancakes, quick breads or muffins.

Convenient canned pumpkin pure is just as good a choice as fresh pumpkin, as long as you look for 100% pumpkin products with no other ingredients such as added salt or sugar.

Of course, you can also use pumpkin puree to make that traditional pie. You’ll still get all of pumpkin’s nutritional goodness, but go easy on the butter, sugar and whipped cream.