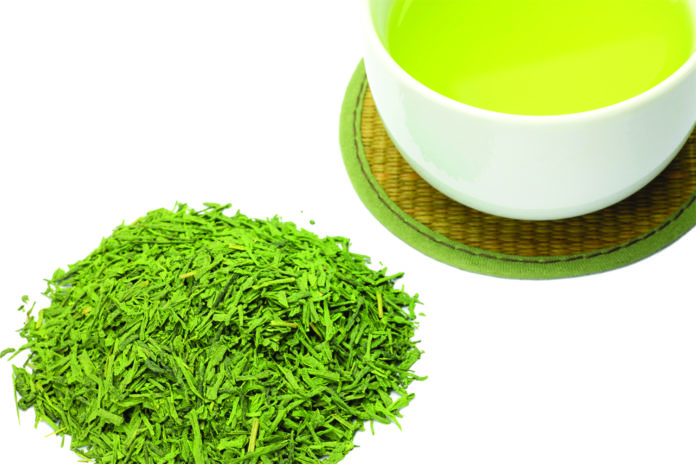 A flurry of new studies is raising hope that green tea may someday be a potent weapon in the fight against Alzheimers disease and other forms of dementia. Although the studies differ widely in technique, ranging from scan-ning peoples brains to forming Alzheimers plaques in a test tube, all focus on ways polyphenol compounds in green tea affect important areas of the brain. The studies used extracts of green tea-notably a polyphenol compound called EGCG (epigallocatechin-3-gallate)-but experts say similar benefits could be gained sim-ply by sipping tea.

As some research has revealed the potential benefit of selected vitamins and fatty acids in promoting cognitive function, says Jeffrey B. Blumberg, PhD, director of Tufts HNRCA Antioxidants Research Laboratory, recent studies on flavonoids, phytochemicals especially rich in plant foods like berries and tea, show they too may act to promote brain performance and/or reduce the risk for neurodegenerative conditions.

In one new study, published in the European Journal of Clinical Nutrition, Swiss researchers used functional magnetic resonance imaging (fMRI) to watch the brains of 12 healthy volunteers as they performed tasks testing working memory. This type of memory allows the brain to simultaneously store and process information; its important to such complex cognitive tasks as language comprehension, learning and reasoning. Participants brains were scanned after the subjects had consumed two different doses of a beverage containing green-tea extract, as well as a placebo drink.

Compared to the placebo, the green-tea beverages were associated with increased activity in the dorsolateral prefrontal cortex of the brain. Thats a key area for working-memory processing. Significantly, the activity was greater still with the higher dose of the green-tea extract-what scientists call a dose-response relationship, a sign of cause and effect. Researchers noted that this was the first neuroimaging study to show that fMRI could examine how green-tea extract works on the brain. They said the findings suggest that green-tea extract may modulate brain activity in the dor-solateral prefrontal cortex.

The cells were taken from the hip-pocampus, a tiny part of the inner brain that acts as a sort of hard drive for memories, indexing them and sending them to other parts of the brain when needed. The production of nerve cells (neurogenesis) in the hippocampus of adult brains is important to brain plasticity-the ability of the brain to change in response to new inputs. This neurogen-esis decreases with age, a dropoff thats also associated with various neurological disorders and cognitive decline.

Researchers found that treatment with EGCG significantly increased the number of cells associated with neuro-genesis. When mice were injected with EGCG, their performance in navigating a maze markedly improved-a sign of increased spatial cognition.

INTERRUPTING ALZHEIMERS: Two other new studies tested whether green-tea extracts could block the formation of the amyloid plaques associated with Alzheimers disease; one of the studies also tested resveratrol, a compound found in red wine.

British scientists, reporting their findings in the Journal of Biological Chemistry, formed balls of amyloid proteins in the lab-similar to the toxic, sticky aggregations that attach to nerve cells in the brains of Alzheimers patients. Experimenters then added extracts from green tea and red wine to the amyloid balls. Both extracts caused the shape of the balls to distort in such a way that they could no longer bind to nerve cells and disrupt their functioning.

The researchers likened the amyloid balls normally precise attachment to nerve cells to the way a baseball fits snugly into its glove. After EGCG and resveratrol altered the shape of the balls, the toxic proteins no longer fit.

Simon Ridley, MD, head of Alzheim-ers Research UK, which partly funded the study, commented, While these early-stage results should not be a signal for people to stock up on green tea and red wine, they could provide an impor-tant new lead in the search for new and effective treatments.

The positive findings were under-scored, moreover, by similar research at the University of Michigan, published in the Proceedings of the National Academy of Sciences. A multidisciplinary research team of chemists, biochemists and biophysicists investigated the structural effects of EGCG on amyloid plaques. They found that the green-tea compound prevented the formation of potentially dangerous amyloid aggregates. The EGCG extract also actually broke down existing aggregates in proteins that con-tained metals-copper, iron and zinc-associated with Alzheimers disease.