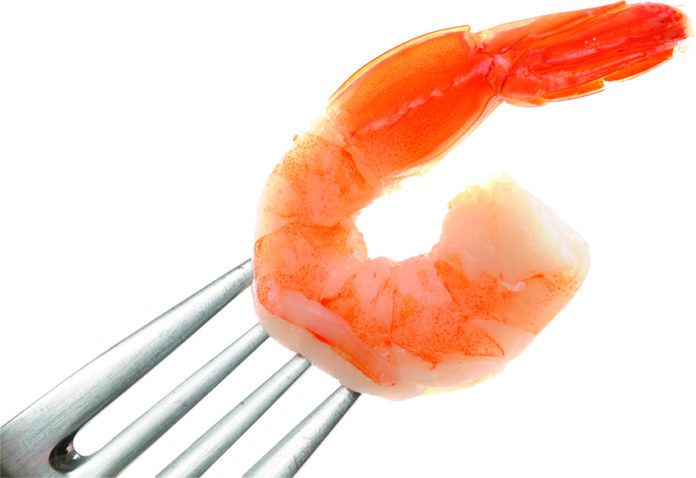 In the drumbeat of advice, in these pages and elsewhere, to eat more seafood, there’s little mention of America’s favorite seafood—shrimp. Thanks to cheap imports of foreign, farm-raised shrimp, what once was a white-tablecloth delicacy now shows up in casual-dining restaurants and warehouse-club freezer sections far from any coast. Shrimp passed canned tuna on the National Fisheries Institute list of most-consumed seafood in 2001, and today Americans consume 4.2 pounds of shrimp per capita.

But is shrimp good for you?

“Shrimp is a lean source of high-quality protein. However, because it is low in total fat it is also low in omega-3 fatty acids,” says Alice H. Lichtenstein, DSc, director of Tufts’ HNRCA Cardiovascular Nutrition Laboratory. “When preparing shrimp it is best added to a stir-fry with lots of vegetables or to a lightly dressed salad. Avoid adding to dishes where the base is cream or butter, because you significantly increase both the calories and saturated fat.”

THE FAT IN SHRIMP

Like most seafood, shrimp is relatively low in calories and high in protein, delivering 12 grams of protein with just 60 calories in three ounces of raw shrimp. A three-ounce serving also contains about 20% of the Daily Value (DV) of phosphorus, more than 15% of the DV of vitamin B12 and small amounts of other vitamins and minerals.

Shrimp is extremely low in saturated fat, with less than a tenth of a gram in three ounces, and essentially trans-fat free. So substituting shrimp for an equivalent amount of steak or cheese can cut your calories by almost two-thirds and saturated-fat intake by more than 90%.

Unfortunately, as Lichtenstein points out, shrimp is also low in heart-healthy omega-3 fats, with just 52 milligrams in a three-ounce serving. Compare that to the 1,100-1,900 grams in a similar serving of salmon, or even the 170-240 grams in three ounces of canned tuna. Unlike some richer sources of omega-3s such as tilefish, shark, swordfish and king mackerel, however, shrimp has almost zero mercury contamination, making it a safe choice for pregnant women and children.

The big question mark about shrimp and your health, however, has long been the fact that our favorite crustacean is also packed with dietary cholesterol. At 107 milligrams in three ounces, shrimp has almost twice as much dietary cholesterol as a steak and more than half that in a large egg (185 milligrams).

A key study testing the cholesterol effects of shrimp was conducted in 1996 at Rockefeller University. Scientists fed volunteers a diet containing about 10 ounces of steamed shrimp a day (equivalent to more than three servings), comparing the effects on cholesterol with a control diet and one containing two hard-boiled eggs a day. Both the shrimp and egg diets increased unhealthy LDL cholesterol. But the shrimp diet boosted healthy HDL cholesterol even more, leading to an overall improvement in cholesterol ratios. The shrimp diet also decreased triglyceride levels.

Any health benefits of choosing shrimp over steak quickly sizzle away, of course, if you prepare the shrimp in a way that adds saturated fat, sodium and calories. There are plenty of healthy ways to cook shrimp—boiled, steamed, grilled, broiled, baked, sauted or stir-fried with a liquid vegetable oil (and a heaping accompaniment of vegetables). But with unwise cooking and additions, a 60-calorie serving of shrimp can quickly zoom past the 160 calories in three ounces of steak.

The deep-fried breaded shrimp so popular in casual-dining restaurants are no more healthy than a burger: A “popcorn shrimp” entre can top 500 calories, 2.5 grams of saturated fat and a whopping 2,100 milligrams of sodium. “Coconut shrimp” are even more caloric. And don’t think that combining shrimp with pasta lessens the impact, not if it’s coated in a creamy sauce: “Alfredo”-style shrimp and pasta can total more than 1,000 calories, 20 grams of saturated fat and twice your recommended daily sodium.

One other cautionary note about shrimp comes from environmental advocates, who see a dark side to the plummeting prices of foreign, farm-raised shrimp. More than 90% of the shrimp consumed in the US comes from abroad, led by China, Thailand, Vietnam, Brazil and Ecuador. Before the 1980s, less than 1% of the world’s shrimp was farm-raised, but now the overwhelming majority comes from farms that environmentalists assert pollute ecosystems and destroy forest land. Overuse of chemicals and antibiotics in shrimp farming, some critics charge, also makes the seafood less safe for consumers.

The bottom line for US shrimp fishermen, already hard-hit by hurricane damage and oil spills, is that cheap competition is putting many real-life Forrest Gumps out of business.

If you’re concerned about buying shrimp that’s as good for the environment as it is for you, the Monterrey Bay Aquarium

Good alternatives include wild-caught Northern or Bay shrimp from the Atlantic, Spot Prawns from the US Pacific, and Gulf shrimp, which may be marketed as Brown, Pink, Rock, White or Ebi shrimp. Shrimp from Thailand farmed in fully recirculating systems are another alternative.