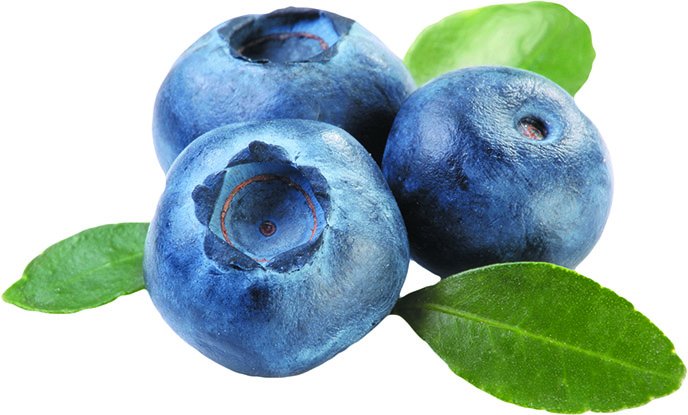 “Blueberries are rich in polyphenols called anthocyanins, which give them their distinctive color,” says Diane L. McKay, PhD, an assistant professor at Tufts’ Friedman School and a scientist in the HNRCA Antioxidants Research Laboratory. “They are also a good source of vitamin C, manganese and dietary fiber.”

One of the few fruits native to North America, blueberries reach their peak in June and July. Imports from South America, however, have made the berries available year-round. Research has also shown that frozen blueberries retain most of their anthocyanin content. (Cooking at temperatures above 350 degrees damages these polyphenols, however, so go easy on the blueberry muffins.)

Blueberries are Good for Your Heart

The latest study of blueberries’ blood-pressure effects, published in the Journal of the Academy of Nutrition and Dietetics, compared freeze-dried blueberry powder—equivalent to eating a cup of berries a day—with a placebo powder. The eight-week clinical trial involved 48 postmenopausal women in the early stages of hypertension. Those randomly assigned to the blueberry powder showed improved blood pressure and reduced arterial stiffness; average systolic blood pressure (the top number) declined 5.1%, while diastolic pressure dropped 6.3%.

“These findings suggest that blueberries may prevent the progression to full-blown hypertension,” the researchers commented. “The changes in blood pressure noted in this study are of clinical significance, as they demonstrate that blood pressure can be favorably altered by the addition of a single dietary component (e.g., blueberries).”

Other cardiovascular research has suggested that blueberries could help improve cholesterol levels. Blueberry consumption has also been linked to reduced oxidation of the bad LDL cholesterol; this oxygen damage makes the LDL particles more dangerous.

Blueberries are Good for Your Brain

Because the anthocyanins in blueberries can cross the blood-brain barrier, they might decrease vulnerability to the oxidative stress that occurs with aging, reduce inflammation, and increase signaling between neurons. According to Barbara Shukitt-Hale, PhD, of Tufts’ HNRCA Neuroscience and Aging Laboratory, “A growing body of preclinical and clinical research has identified neurological benefits associated with the consumption of berry fruits. In addition to their now well-known antioxidant effects, dietary supplementation with berry fruits also has direct effects on the brain.”

Among 16,000 women over age 70 participating in the Nurses’ Health Study, researchers found that women who consumed two or more half-cup servings of blueberries or strawberries per week experienced slower mental decline. The association was equivalent to up to two-and-a-half years of delayed aging.

Tufts scientists have found that the addition of blueberries to the diet in animal studies improved short-term memory, navigational skills, balance and coordination. Compounds in blueberries seem to jump-start the brain in ways that get aging neurons to communicate again. Shukitt-Hale and colleagues recently completed a clinical trial in human volunteers to test whether a powdered blueberry supplement benefits cognition and mobility in older adults.

Although blueberries fall in the lower middle of the glycemic index, somewhat higher than other berries, they seem beneficial for blood-sugar regulation. For example, a newly published study of blueberry supplementation in mice reported improvements in glucose tolerance. In humans, a recently completed but not yet published clinical trial at the USDA’s Beltsville (Maryland) Human Nutrition Research Center tested the effect of blueberry powder on insulin sensitivity.

Although the evidence for anti-cancer benefits remains limited, the American Institute for Cancer Researchdoes include blueberries on its list of cancer-fighting foods. In cell studies, blueberry phytochemicals have been shown to decrease free radical damage to DNA that can lead to cancer and to inhibit the growth of cancer cells. In animal studies, blueberries decrease esophageal cancer and estrogen-induced mammary cancer and DNA damage.

The US and Canada are by far the worlds largest growers of blueberries, which are native to North America. Frozen blueberries and imports from South America, however, now make blueberries available all year and per-capita consumption has increased by 70% since 1997.

Choose firm, uniformly colored berries and dont shy away from fruit with a whitish bloomthats a natural coating that protects their skins. (To preserve this layer, dont wash blueberries until right before eating them; organic berries dont need to be washed at all.) Whether fresh or frozen, gently shake the berries to make sure they arent clumped together by mold or ice crystals from thawing and refreezing. Keep fresh berries in a covered container in the refrigerator.