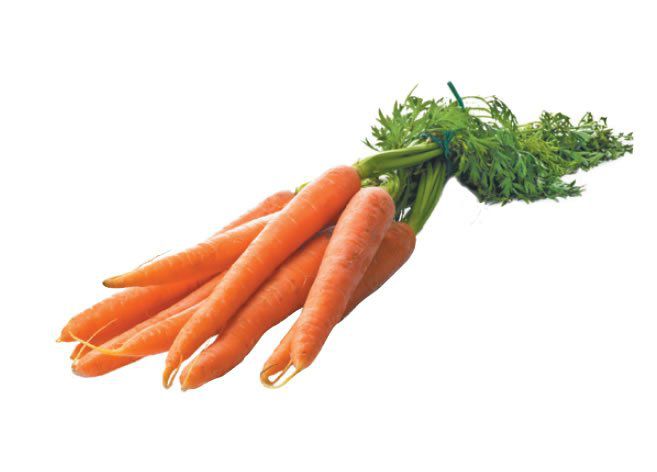 Bugs Bunny, always depicted munching on a carrot, may have been onto something. Researchers have found that carrot consumption not only helps insure an adequate intake of a variety of important nutrients and fiber, but may also reduce your risk of chronic disease.

“Carrots are so much a part of our diet that their health benefits may have been overlooked,” says Elizabeth J. Johnson, PhD, a scientist in Tufts’ HNRCA Antioxidants Research Laboratory who specializes in vitamin A and carotenoid compounds. “They are best known for their beta-carotene content (a form of vitamin A), but are also packed with a range of other phytochemicals and nutrients that contribute to optimal health.”

COLORFUL CULTIVATION: Not surprisingly, according to some accounts, carrots were first cultivated as medicinal plants. Originating in the Middle East and present-day Afghanistan, the carrot is related to a family of plants, Umbelliferae, that produce umbrella-like flower clusters; these include celery, fennel, parsnips, dill and parsley. Early carrots were purple, red, yellow and white, with the familiar orange color not developed until the 16th and 17th centuries, by Dutch growers. The name “carrot” comes from the Greek “karoton,” meaning horn-like and referring to the shape of the root that’s the most commonly consumed part of the plant. (Carrot greens are also edible and are high in vitamin K.)

With just 25 calories in one medium carrot, you get 1.7 grams of fiber (6.8% of the Daily Value), 195 milligrams of potassium (5.6% of the DV), 3.6 milligrams of vitamin C (6% of the DV) and smaller amounts of other nutrients. The fiber in carrots includes pectin, which may have cholesterol-lowering properties.

Carrots are best known as a source of vitamin A, mostly in the form of beta-carotene. A single medium carrot delivers almost twice the DV of vitamin A, which is associated with carrots’ most celebrated health benefit—improving your vision. Except for people with vitamin A deficiency (rare in developed countries), however, eating more carrots is actually unlikely to help you see better. That popular association came from an advertising campaign by the British Royal Air Force in World War II, designed to throw off the Germans by crediting carrots—instead of the secret invention of radar—for pilots’ keen eyesight.

One study did find that women who ate more carrots had lower rates of glaucoma. Animal studies have linked nutrients in carrots to reduced risk of cataracts.

HEART HOPES: Like all healthy foods, carrots are much more than just the sum of their individual nutrients. A 10-year Dutch study published in 2011 in the British Journal of Nutrition, for example, linked consumption of deep-orange fruits and vegetables—especially carrots—to a lower risk of coronary heart disease. People who ate at least 25 grams (0.9 ounces, less than half a medium carrot) daily were at significantly lower risk. Carrots, the largest contributor to orange-produce intake, were specifically associated with a 32% lower risk compared to those eating almost none.

A group of phytonutrients found in carrots called polyacetylenes, including the compounds falcarinol and falcarindiol, have also attracted scientific interest for possible cardiovascular benefits. These compounds are thought to have anti-inflammatory properties and to keep blood cells from clumping together. Other studies are investigating these compounds’ ability to inhibit the growth of cancer cells.

Different-colored carrots contain different potentially beneficial antioxidants. Red carrots are high in lycopene, while purple carrots get their color from anthocyanins, much like berries.

PREP PUZZLES: Much debate has focused on the preparation methods most likely to obtain the most nutrients from carrots. For starters, if you buy organic carrots it’s not necessary to peel them, and some studies have found that the peel is richest in nutrients. (If you’re watching your budget, however, carrots are not on the Environmental Working Group’s “Dirty Dozen” list of produce most important to buy organic because of pesticide concerns.) A few tests have also suggested that cutting or chopping carrots after cooking, rather than before, preserves more nutrients.

Juicing, an increasingly popular way to consume carrots and other produce, is fine if it gets you to eat more vegetables and fruits—but keep in mind that you’re leaving the beneficial fiber of carrots behind. (Using a blender instead of a juice extractor preserves the fiber.)

What about raw versus cooked? The science is mixed. While cooking destroys some heat-sensitive nutrients, such as vitamin C, it helps make others more readily absorbed by the body. Steaming or microwaving carrots, rather than boiling them, loses fewer nutrients to the cooking water. Roasting carrots brings out their natural sweetness. The bottom line? Eat your carrots however you think they taste best—just eat more of them.

Choose brightly colored carrots that are smooth, firm and relatively straight. Contrary to what you might expect, larger carrots are sweeter, as theyve had more time to develop natural sugars and have larger cores. If tops are attached, look for bright, feathery, unwilted greens; remove tops when you get home, as they will extract moisture and nutrients from the carrot roots.

Store carrots in the coolest part of the refrigerator for about two weeks, wrapped in a damp paper towel and placed in an airtight container or bag. Keep carrots away from foods such as apples, pears or potatoes that release ethylene gas, which makes them bitter. Wash before using.

Carrots can be eaten on their own, raw or cooked, or chopped or shredded into salads, stews, soups, pilafs and other dishes.