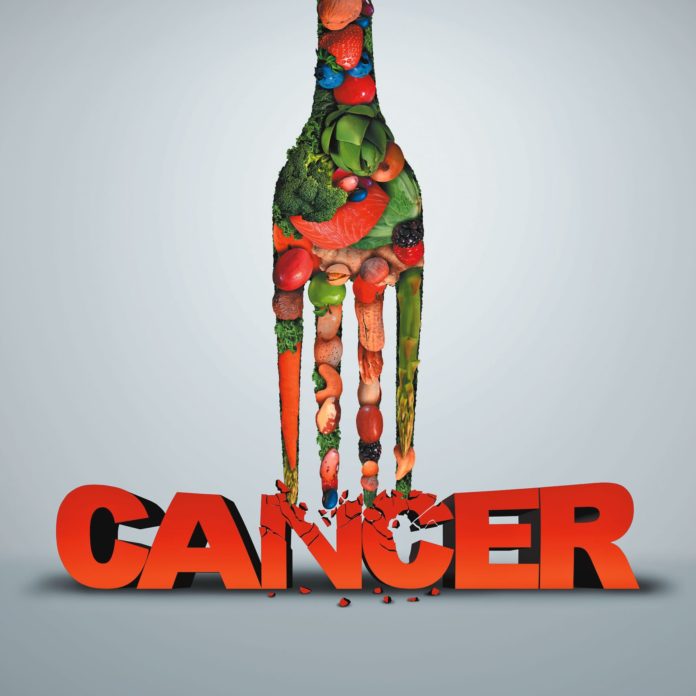 According to the World Cancer Research Fund (WCRF), 20 percent of all cancers diagnosed in the U.S. are related to poor dietary choices and lack of exercise. So what should we eat, and what should we avoid? News outlets and the internet are full of (sometimes conflicting) reports claiming links between specific foods or nutrients and cancer. Many of these claims are based on a limited number of studies. But when researchers analyze all of the research on cancer and nutrition together, it becomes clear that increasing intake of individual foods or popping dietary supplements doesn’t work. Overall dietary pattern, however, can make an important and significant difference.

Diet and Cancer: “There is a clear link between diet and cancer,” says Jerold Mande, MPH, who worked on cancer policy for two Presidential administrations and the Yale Cancer Center before joining Tufts’ faculty. “In fact, trend lines indicate that dietary issues could surpass cigarette smoking as the greatest cancer-causing threat.”

The Continuous Update Project (CUP), an ongoing review of research on nutrition and cancer conducted by the WCRF and the American Institute for Cancer Research (AICR), is helping to clarify the diet-cancer interaction. To date, the CUP has found evidence that diet, weight, and physical activity level can impact risk of 17 cancers, including colorectal, breast, mouth, pharynx, larynx, esophageal, stomach, bladder, kidney, liver, gallbladder, ovarian, prostate, endometrial, pancreatic, and lung cancers. Being overweight or obese is clearly linked with an increased risk of 13 of these cancers. “We know for sure that obesity is linked to many cancers, and seven in 10 Americans are now overweight or obese,” says Dominique Michaud, ScD, a professor at Tufts University School of Medicine who has conducted extensive research on the intersection of cancer and nutrition. “After not smoking, being a healthy weight is the most important thing you can do to prevent cancer.”

Dietary Factors and Increased Cancer Risk: While utilizing diet to maintain or reach for a healthy weight is a key cancer-prevention goal, there are a few specific dietary factors that continue to be associated with increased risk of cancer (although the mechanisms behind these associations are not fully understood). “High consumption of processed meats and low whole grain intake are two major dietary factors that increase the cancer burden in the U.S.,” says Fang Fang Zhang, MD, PhD, an associate professor at Tufts’ Friedman School of Nutrition Science and Policy and a cancer epidemiologist. “Other dietary factors, such as high consumption of sugar-sweetened beverages and junk food, can increase the risk of cancer by increasing obesity risk.” The following are some categories of foods associated with increased cancer risk:

-Processed meats (such as ham, deli meats, bacon, salami, hot dogs, and sausages) often have added nitrates, which are associated with increased colorectal and stomach cancer risk. Meats labeled “no nitrates added” are often made with “natural” sources of nitrate, such as celery juice, and so are not nitrate free. Eating smoked or salt-cured meats also increases exposure to potential cancer-causing agents. Intake of processed meats should be eliminated or reduced.

-Red meat (meat from any mammal, including beef, veal, pork, lamb, mutton, horse, and goat) has been associated with increased risk of colon cancer. Cooking meat at very high temperatures (such as frying, broiling, or grilling) can lead to the formation of chemicals that might increase cancer risk. Try braising, steaming, poaching, stewing, and microwaving meats instead.

-Use of pesticides, herbicides, genetic modification, and irradiation on foods have not been proven to either increase or decrease cancer risk. Overwhelming scientific evidence supports the overall health benefits and cancer-protective effects of eating vegetables and fruits, so the benefits of eating these foods far outweigh any potential risk. Wash fresh fruits and vegetables thoroughly before eating (even organics), to lower exposure to chemicals and to limit the risk of health effects from germs. No data to date support concerns about cancer and genetically modified organisms (GMOs).

-Decreasing Cancer Risk: There are no magic foods that, when added to one’s diet, will prevent cancer, but there is good evidence that an overall healthy dietary pattern rich in plant foods can help to lower risk. Plant foods (fruits, vegetables, whole grains, legumes, nuts, and seeds) are rich in fiber, vitamins, minerals, and phytochemicals, all of which have roles to play in health. Some of these plant compounds act as antioxidants, which reduce potentially-carcinogenic damage to cells caused by normal chemical reactions in the body.

-Whole grains. “More research is showing an association between diets high in whole grains (and low in refined grains) and lower risk of colorectal cancer,” says Michaud. “This is likely due in part to the fact that high-sugar refined-grain foods are linked to weight gain, and in part to the known anti-colon-cancer benefits of the fiber in whole grains.”

-Fruits and vegetables. According to the American Cancer Society (ACS), scientific evidence suggests that eating vegetables and fruits is associated with lower risk of several types of cancer, including cancers of the lung, mouth, throat, voice box, esophagus, stomach, colon, and rectum.

There is no proof at this time that a strict vegetarian or vegan diet is any better at reducing cancer risk than simply reducing intake of red and processed meats. Additionally, not all plant-based diets are equal. “Studies suggest that the quality of the plant foods we consume matters more than simply eliminating animal foods from the diet,” says Zhang. “High intake of fruits, vegetables, and whole grains is associated with health benefits, whereas high intake of unhealthy ‘plant-based foods’ that are low in fiber or high in added sugars is not.” A plant-based dietary pattern appears to be beneficial for preventing not only cancer but also diabetes and heart disease.

Skip the Supplements: Eating nutrient-rich foods (like vegetables, fruits, and other plant-based foods) may reduce cancer risk, but taking dietary supplements does not seem to have the same effect. Antioxidants, for example, may have anti-cancer activity, but consuming antioxidants in the form of dietary supplements is not associated with reduced cancer risk. In some cases, there is evidence of possible harm from getting nutrients from supplements as opposed to from foods. High doses of the vitamin A precursor beta-carotene, vitamin E, and folate have each been linked with an increased risk of certain cancers. According to preliminary research reported by the ACS, Vitamin D may help prevent colorectal cancer, but results from large studies won’t be ready for several years. “It is overall dietary intake, not trace elements, that impacts health, including cancer,” says Mande. “Don’t rely on supplements for cancer prevention. Instead, choose a plant-forward dietary pattern to reduce your cancer risk.” Mande recommends starting by filling half the plate with fruits and vegetables at every meal.

“Even though there are no miracle cancer-preventing foods, there is definitely a role for diet in the prevention of cancer,” says Michaud. “People who follow a healthier dietary pattern and are leaner are less likely to get cancer. Limiting red and processed meats and alcohol consumption, making sure you’re not overeating, and consuming a dietary pattern rich in fruits, vegetables, and whole grains and low in less-nutritious refined grain, sugar-rich processed foods is the best choice for cancer prevention, and overall health.” Best of all, a dietary pattern that is associated with reduced cancer risk is also associated with reduced heart disease and diabetes risk.

About two out of three Americans are overweight or obese. While it is not clear exactly how excess body fat raises cancer risk, being overweight or obese is clearly associated with an increased risk of several types of cancer:
-Mouth, pharynx, and larynx
-Esophagus
-Breast (among women who have gone through menopause)
-Colon and rectum
-Endometrium (lining of the uterus)
-Ovaries
-Kidney
-Pancreas
-Gallbladder
-Liver
-Stomach
-Advanced prostate

Based on their analysis of cancer prevention research from all over the world, the AICR/WCRF Third Expert Report recommends taking the following steps to reduce cancer risk:

-Be a healthy weight.
-Be physically active as part of everyday life.
-Make whole grains, vegetables, fruits, and beans a major part of your usual daily diet.
-Limit consumption of “fast foods” and other processed foods high in fat, starches, or sugars.
-Limit consumption of red meat (such as beef, pork, and lamb). The ACS recommends limiting red meats to three portions per week (12 to 18 ounces total).
-Eat little, if any, processed meat (like hot dogs, deli meats, and bacon).
-Drink mostly water and limit consumption of sugar-sweetened drinks.
-Limit alcohol consumption. The American Cancer Society recommends no more than two drinks a day for men, and no more than one for women. A drink is defined as a 12-ounce beer, five ounces of wine, or one-and-a-half ounces of 80-proof hard liquor.
-Do not use dietary supplements for cancer prevention.
-Breastfeed babies, if possible.
-Avoiding tobacco products and limiting sun exposure are also important steps for reducing cancer risk.