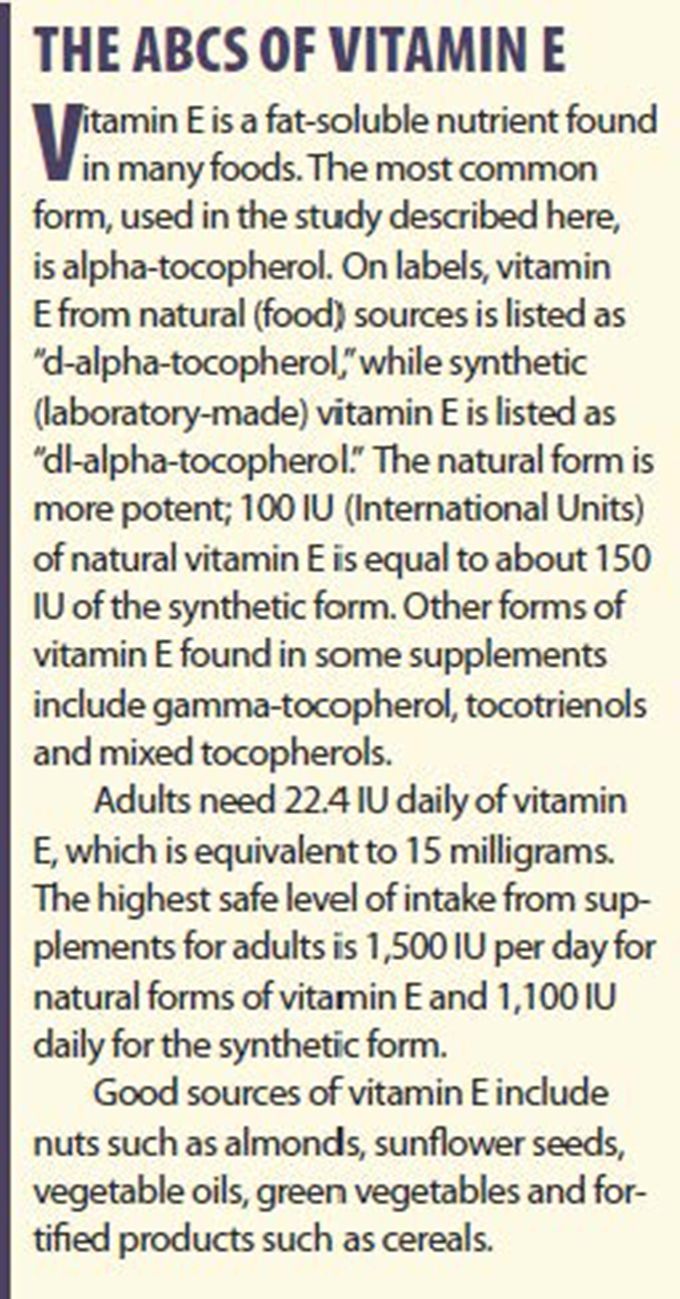 Do recent hopeful headlines about vitamin E and Alzheimers disease mean you should run out and buy vitamin E supplements? Not unless you or a loved one already has mild to moderate Alzheimers-and even then the experts are split. The latest findings, from a study of 613 mostly male veterans at 14 VA hospitals across the country, focused on slowing the progression of the disease, not preventing it in the first place.

The findings from this paper are specific to individuals with moderate-to-severe Alzheimers disease and dont generalize to a healthy population, cautions Tammy Scott, PhD, a scientist at Tufts HNRCA Nutrition and Neurocognition Laboratory. Results from previous studies of vitamin E supplementation in healthy adults did not show a benefit to cognitive function or a reduction of cognitive decline.

INSIDE THE RESULTS: The study, published in JAMA, compared a placebo versus three treatments for patients with mild or moderate Alzheimers: high-dose (2,000 IU daily) vitamin E supplements; a combination of vitamin E and memantine, a drug thats been shown to have modest benefits in moderate-to-severe Alzheimers; and memantine alone. Only the vitamin E group saw any benefit, a small but statistically significant difference in tests of functional impairment over a period of more than two years. All three groups declined in their ability to perform tasks of daily living, but the vitamin E group averaged a drop of 13.81 points versus 16.96 points for those on placebo.

It was not clear why the vitamin E plus memantine group didnt see a similar benefit in functional impairment. None of the three treatments was associated with a benefit in scores of cognitive function, compared to the placebo.
In an accompanying editorial, Denis A. Evans, MD, of Rush University, and colleagues cautioned, As with almost all previous Alzheimers disease trials, the therapeutic effect seen was modest and more relevant to Alzheimers disease symptoms and consequences than to reversal of the disease process.

EARLIER STUDIES: Previous results of vitamin E against dementia have been mixed. One 1997 study reported that vitamin E delayed functional decline in patients with moderately severe Alzheimers by the equivalent of about seven months. Other studies, however, found that vitamin E supplements did not delay dementia in those without symptoms or with mild cognitive impairment. The Womens Health Study reported in 2006 that long-term supplementation of vitamin E (600 IU every other day) did not provide cognitive benefits among generally healthy older women.

Moreover, a 2005 analysis of vitamin E supplements and a range of diseases concluded that high doses could actually increase mortality risk. The new Alzheimers study did not find any safety issues associated with vitamin E.