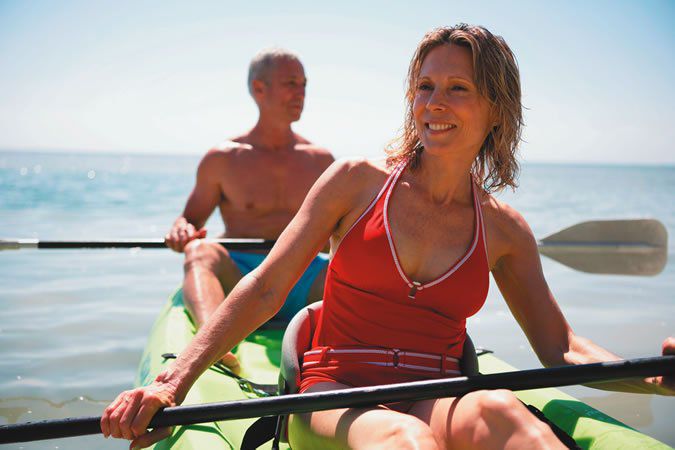 Could the “sunshine vitamin,” known to be crucial to bone health, also help protect the aging brain against dementia and Alzheimer’s disease? It’s possible, says Robin B. Kanarek, PhD, Tufts professor of psychology. “There is mounting evidence demonstrating that vitamin D is critical for the normal functioning of the nervous system,” she explains, “and that vitamin D deficiency may contribute to age-related decrements in cognitive behavior.”

Vitamin D plays a variety of roles within the nervous system. For example, the vitamin is important in the synthesis of a number of neurotransmitters, such as dopamine, serotonin, catecholamines and acetylcholine. “It has also been proposed that vitamin D protects against age-related inflammatory changes in the hippocampus and reduces hippocampal biomarkers of aging,” Kanarek adds. “Moreover, recent work in experimental animals has demonstrated that injections of vitamin D not only mitigate age-related changes in inflammatory state, but also decreases age-related memory impairments. Vitamin D also augments the removal of the beta-amyloid plaques associated with Alzheimer’s disease.”

NEW STUDY: Now the largest study of its kind, partly funded by the Alzheimer’s Association and recently published in the journal Neurology, has reported an inverse relationship between vitamin D and risk of dementia. David J. Llewellyn, PhD, of the University of Exeter in England, and colleagues found that older individuals deficient in vitamin D were significantly more likely to develop dementia and Alzheimer’s over almost six years of followup than individuals with higher blood levels of the vitamin.

“We expected to find an association between low vitamin D levels and the risk of dementia and Alzheimer’s disease,” Llewellyn commented, “but the results were surprising – we actually found that the association was twice as strong as we anticipated.”

Researchers examined long-term outcomes in 1,658 participants, age 65 and older, in the Cardiovascular Health Study; 171 developed dementia, including 102 cases of Alzheimer’s disease. Blood levels of vitamin D were used to determine which participants were deficient (defined as about 10-20 nanograms per milliliter) and severely deficient (below 10 ng/mL).

NOT CAUSE AND EFFECT: Llewellyn and colleagues were quick to caution, however, that this kind of study – called a “prospective” study – is not designed to prove cause and effect. While the study accounted for a variety of other demographic and risk factors for dementia, it did not factor out physical-activity levels or overall poor health. Both could contribute to lower vitamin D levels, through reduced sunlight exposure and poor diet, respectively. So it’s possible the findings reflect “reverse causality.”

Tufts’ Kanarek explains: “Rather than contributing to the development of age-related cognitive decline and Alzheimer’s disease, it is possible that vitamin D deficiency represents a consequence, rather than a cause, of cognitive deficits in elderly individuals. Age-related degenerative illnesses, such as Alzheimer’s disease, are often marked by a reduction in mobility and outdoor activity, and thus a decrease in exposure to sunlight. Moreover, as these diseases progress many patients experience feeding difficulties leading to a decrease in dietary intake of vitamin D, or are taking medications which interfere with absorption of the vitamin.”

Randomized clinical trials are necessary to demonstrate a cause-and-effect connection between vitamin D and dementia, she notes. To date, such trials have been limited and the results mixed.

GETTING YOUR D: It’s not even clear how much vitamin D, measured by blood levels, is enough for good health. Most experts have concluded that the minimum level is between 20 and 30 ng/mL. “Using these values, a significant proportion of the world’s population has lower than the recommended levels of vitamin D,” Kanarek points out. “Older individuals are particularly at risk as a result of consuming a diet with less than adequate vitamin D, having a reduced capacity to metabolize the vitamin, and having limited exposure to sunlight.”