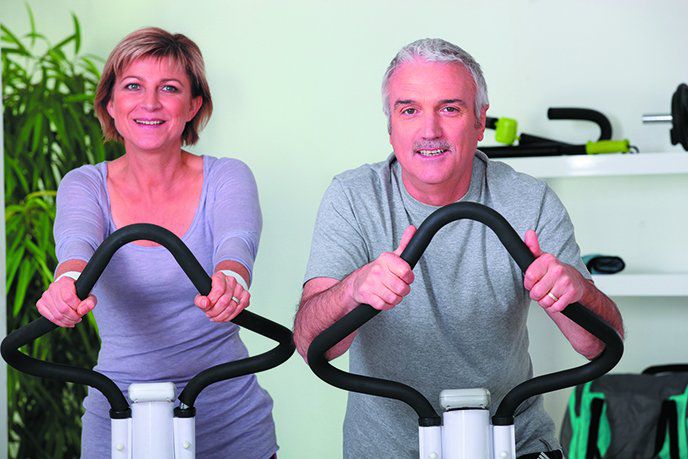 Two new studies provide important evidence of how physical activity might reduce the risk of Alzheimer’s disease and other forms of cognitive decline. One study reported that participants who were most active showed the least decline – the equivalent of 10 years of mental aging. In a second study, the most active older adults were found to have the largest volume of gray matter in brain regions typically affected most by Alzheimer’s.

“Physical activity has consistently been shown to be beneficial to cognitive and brain health,” says Tammy Scott, PhD, a scientist at Tufts’ HNRCA Neuroscience and Aging Laboratory, “and there is increasing evidence that regular exercise lowers the risk for dementia and cognitive decline.”

INTENSITY MATTERS: For the first study, published in the journal Neurology, researchers looked at data on 876 people enrolled in the Northern Manhattan Study who were asked how long and how often they exercised during the previous two weeks. Most – 90% – reported no exercise at all or only light exercise such as walking and yoga. The remaining 10% reported moderate to high-intensity exercise, such as running or aerobics.

Among people with no initial signs of memory or thinking problems, those in the low-activity group showed a greater decline on tests of how fast they could perform simple tasks and how many words they could remember from a list. Compared to the higher-activity 10%, the difference was equal to that of 10 years of aging. That disparity remained after adjustment for other factors that could affect brain health, such as smoking, alcohol use, high blood pressure and body mass index.

“Our study showed that for older people, getting regular exercise may be protective, helping them keep their cognitive abilities longer,” says lead author Clinton B. Wright, MD, of the University of Miami. He cautions, however, that “more research from randomized clinical trials comparing exercise programs to more sedentary activity is needed to confirm these results.”

EXPENDED CALORIES COUNT: Further evidence linking activity to brain health comes from another population study, published in the Journal of Alzheimer’s Disease. To evaluate the long-term effects of physical activity on brain health, researchers analyzed data on a subgroup of almost 900 participants in the Cardiovascular Health Study, launched in 1989. The men and women, at least age 65 when the study began, had complete medical and cognitive tests, answered questionnaires about their physical activity, and underwent MRI scans of their brains.

The study used the questionnaires to estimate how many weekly calories participants expended in exercise, including walking, jogging and moderate cycling, as well as activities such as gardening and dancing. After five years, compared with more sedentary subjects, the most active one-quarter of participants had significantly more gray matter in parts of the brain associated with memory and higher-level thinking. This difference was observed regardless of cognitive status.

For participants who were cognitively normal at the time of the initial scan, the volume of gray matter in those areas of the brain was associated with subsequent risk of developing mild or severe cognitive impairment: Greater gray-matter volume predicted lower risk. Even among those diagnosed with dementia or mild cognitive impairment at the outset, the extent of brain atrophy was less in the high-activity group than for their more sedentary peers.

If you’re not already physically active, another finding of the study should encourage you to get up and get moving: Among the small number of participants who increased their activity levels, significant increases in gray-matter volume were observed in those same key parts of the brain.

What you eat may also affect your risk for Alzheimer’s disease and other forms of cognitive impairment. A study of the MIND (Mediterranean-DASH Intervention for Neurodegenerative Delay) diet recently reported that adherence to the diet was associated with a slower rate of cognitive decline – equivalent to 7.5 years of younger age. Those with the highest MIND diet scores were 53% less likely to develop Alzheimer’s disease than those with the lowest scores. (See the October 2015 newsletter.)