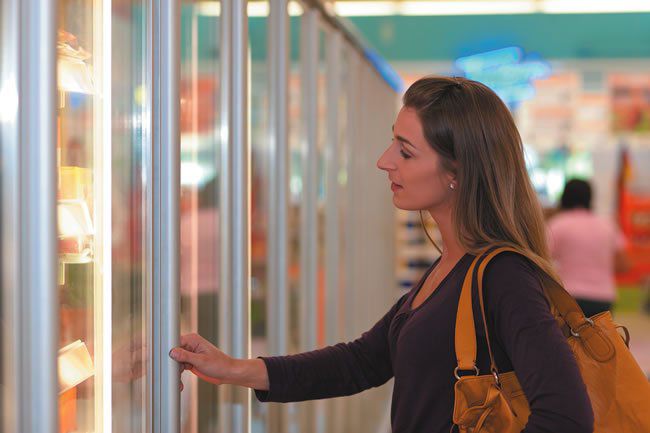 In the dead of winter, grocery shoppers often turn to the freezer aisle for out-of-season produce as well as easy-to-prepare entres. But with sales of frozen foods in decline—down an estimated 5% since 2009—the industry is launching a campaign, “Frozen: How Fresh Stays Fresh,” to boost awareness and promote frozen foods’ nutritional benefits. How do frozen foods really stack up?

Several recent studies have confirmed what nutrition experts have long been saying about frozen fruits and vegetables: Produce from the frozen-food aisle is at least as nutritious as fresh, and certain nutrients are better preserved in frozen fruits and vegetables than in fresh produce after a few days in your fridge. Some new premium frozen meal options may also be better for you than traditional frozen “TV dinners,” with ingredients such as whole grains, quinoa, sweet potatoes and kale. But those tempting frozen pizzas and burritos are still not healthy choices.

“It is like anything else in the supermarket aisles—one needs to pick and choose carefully,” says Alice H. Lichtenstein, DSc, director of Tufts’ HNRCA Cardiovascular Nutrition Laboratory. “Doing so can yield big benefits.”

HITTING “PAUSE”: In a 2013 study at the University of Georgia, researchers bought fresh and private-label frozen blueberries, strawberries, broccoli, green beans, corn, spinach, cauliflower and green peas from six local supermarkets. Nutrient levels were analyzed in samples of the frozen produce and in the fresh equivalents when purchased and after the fresh produce spent five days in a kitchen refrigerator. In most comparisons, day-of-purchase fresh and frozen varieties were nutritionally similar. After five days, however, the fresh produce lost vitamin content, especially vitamins A and C and folate.

“Freezing in essence is nature’s pause button,” commented researcher Ronald Pegg, PhD. “It maintains freshness, slows down enzymatic reactions, increases the time it takes anything to degrade.” Fresh produce, by contrast, is “a living material—it respires, there’s oxidation and enzymes operating. It degrades over time and loses nutrients. That’s normal and to be expected.”

Two similar studies sponsored by the British Frozen Food Federation included more than 40 comparison tests of fresh versus frozen produce. In two-thirds of the tests, frozen fruits and vegetables had higher levels of vitamin C, total antioxidant polyphenols, lutein, beta-carotene and anthocyanins (antioxidant compounds found in foods such as berries) than fresh produce after refrigerated storage.

Says Tufts’ Lichtenstein, “When buying frozen vegetables and fruits, an easy rule is to get the item only and nothing else; that means skipping the sauces and seasonings. Customize them to your own preferences and needs.”

FROZEN CALORIES: The health equation is quite different for most ready-to-eat entres in the frozen-food aisle, however. A typical frozen pizza is nutritionally nearly identical to a similar-sized pizza from your favorite pizza franchise. That is, it’s packed with calories (1,920 in a typical “six-serving” pizza), saturated fat (30 grams) and sodium (a whopping 5,040 milligrams).

You pay for convenience with nutritional negatives in most frozen burritos, too: An eight-ounce frozen burrito (sizes range as big as 14 ounces) might contain 500-600 calories, 7-9 grams of saturated fat and half the sodium most people should get in a day.

Don’t be fooled by terms such as “authentic” or “organic” on the label; these frozen options are every bit as high in calories, saturated fat and sodium. Ditto for “gluten-free,” unless you’ve been diagnosed with celiac disease.

Depend instead on the numbers in the “Nutrition Facts” label, says Lichtenstein: “Invest some time during the first purchase of a new type of food to do a little comparison in terms of calories and salt. You should only have to do this once so it should not be too time-consuming or tedious.”

Keep in mind that frozen meals’ serving sizes may be unrealistically small—two “servings” in a single box of frozen lasagna or casserole, for example, that your eyes tell you is only one meal. Some of those numbers might surprise you: Frozen entres that skip the meat, like fettuccine Alfredo, can still be high in calories (610 in one popular brand), saturated fat (13 grams) and sodium (1,050 milligrams).

Frozen meals that claim to let you take the restaurant experience of popular franchise eateries home also bring home plenty of calories, saturated fat and sodium. But here those serving sizes might work for you—if you can stick to them and not eat the whole package that’s supposed to deliver two portions. The frozen version of one popular Asian chain’s Mongolian beef, for example, has only half the calories and less than a quarter of the saturated fat of the plate-filling portion served at the restaurant.

What about new frozen-meal offerings that promise to be healthier choices? They might be worth a look for days when you’re too frazzled to cook. One serving of Kale Ricotta Ravioli, for example, contains just 260 calories and two grams of saturated fat, with 460 milligrams of sodium. Quinoa and Vegetable Enchiladas have a modest 330 calories, 2.5 grams saturated fat and 230 milligrams sodium.

In short, the frozen-foods aisle is a lot like the rest of the supermarket — only chillier: You still have to read labels and make smart nutrition choices. “Take advantage of the frozen-food options available,” advises Lichtenstein. “Particularly for vegetables, they can really expand options available year-round. Just be careful of the ‘extras’ and steer clear of them.”