Soups are wonderfully versatile and easy to make, and the combinations of ingredients and flavors are endless. They are a great way to boost your intake of vegetables, legumes, and whole grains, and when you make soups at home you control the sodium level, which tends to be high in canned and packaged varieties.

Better Broth: Making broth at home is surprisingly simple. To make a basic broth: cover meat, poultry, or seafood with water, throw in flavorful vegetables (typically onions, garlic, carrots, and celery), bring to a boil, cook for about 10 minutes, then lower to simmer for at least 30 minutes. Strain the resulting broth and use right away, or cool and refrigerate or freeze for future use in soups and stews and as cooking liquid. Skip the animal proteins and up the variety of produce to make vegetable broth. 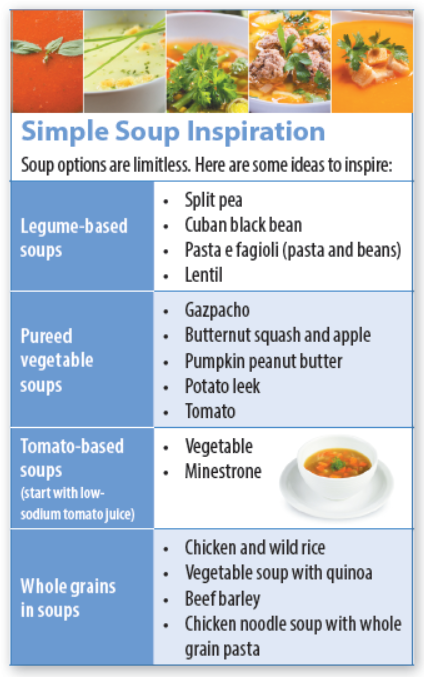 Go for Plants: No matter what kind of broth you start with, soup is an easy and tasty way to increase your plant food intake (while replacing less healthy choices such as processed deli meats and pizza). Whole grains (like barley, brown rice, and millet) and legumes (such as beans, lentils, and split peas) are excellent in soups, and vegetables are a natural, whether pureed (like potatoes, carrots, tomatoes, or beets) or whole and sliced (from peas and corn to squash, celery, and leafy greens).

Put in Protein: Include lean proteins to make a nutritious, satisfying meal. Consider plant-based proteins, including beans, lentils, and split peas; soy products such as tofu, tempeh, and edamame; and whole grains like quinoa. Seafood, chicken, and lean, unprocessed meats are common protein options. Limit processed meats, like ham and sausage, which are high in sodium and linked to negative health outcomes.

Seasoning, Not Salt: Too much dietary sodium intake puts us at risk for serious health conditions, including high blood pressure, heart disease, and stroke. A one-cup serving of canned soup can have close to 1,000 milligram (mg) of sodium, nearly half the recommended daily intake of 2,300 mg. Soup made at home can have significantly less and be just as flavorful. To keep sodium content in check, season soups with flavorful herbs and spices instead of salt. Try oregano and basil for Italian flair; cumin for a taste of India and Morocco; a splash of low-sodium soy sauce for Asian umami, or a dash of cayenne to bring the heat.

From Waste to Wonderful: The U.S. is the global leader in food waste, throwing out 30 to 40 percent of the nation’s food supply. To cut down on food waste, keep a bag in the freezer for discards like woody asparagus ends, cauliflower leaves, onion ends, aging herbs, carrot and potato peelings, and other veggie castoffs. When the bag is full, make vegetable broth.

Whether you’re making broth or soup, be sure to make enough for leftovers. Measure out individual or family sized portions, seal cooled soup in bags or containers, label, and refrigerate or freeze to have multiple meals at the ready. So versatile and easy to make, homemade soup is a delicious and satisfying way to cut your sodium intake and food waste while increasing intake of health-promoting plant foods.

Homemade soup is delicious, versatile, and easy to make. Use it to:

Boost plant intake. Adding plenty of vegetables, whole grains, and legumes to soup is an easy way to up your intake of these important health-promoting foods.

Cut the salt. Prepared soups are high in sodium. Reduce salt by seasoning homemade soups with herbs and spices.

Waste not. Save scraps and leftovers to make broth and soups.