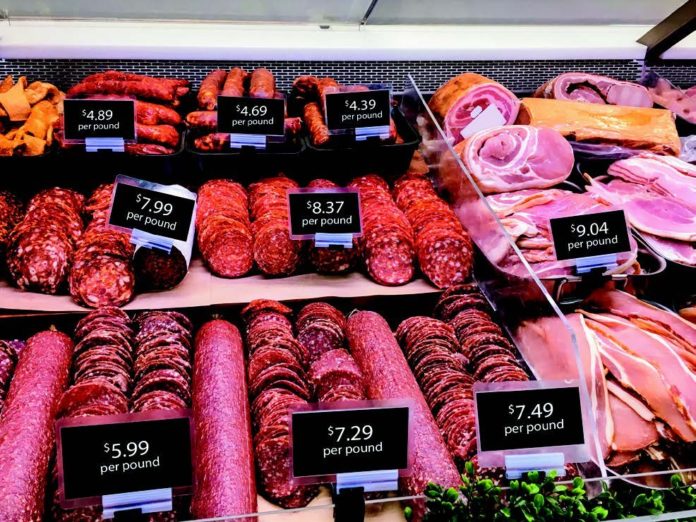 According to the World Health Organization (WHO), about 34,000 cancer deaths per year worldwide are attributable to diets high in processed meats. While that number pales in comparison to the one million or so global cancer deaths related to smoking, it is significant enough to warrant a hard look at processed meats in our diets, especially because they are also associated with cardiovascular disease and other health conditions.

Processed Meat: “Generally speaking, a processed meat is one that has been salted, cured, smoked, fermented or undergone other processes to enhance flavor or improve preservation,” says Joel B. Mason, MD, professor of medicine and nutrition at Tufts and director of the HNRCA Vitamins and Carcinogenesis Laboratory. Examples of processed meats include hot dogs (frankfurters), ham, sausage, corned beef, deli meats, and jerky.

The Cancer Connection: In 2015, based on a review of hundreds of studies, the WHO officially classified processed meat as a carcinogen—something that causes cancer in humans. The researchers concluded that consuming 50 grams of processed meat a day—equivalent to just one hot dog—would raise the risk of getting colorectal cancer by 18 percent over a lifetime. Eating larger quantities raises cancer risk even more. A new study published in September 2018 in the journal Breast Cancer Research and Treatment combined previous research with new data from over 262,000 British women and found that postmenopausal women who ate the most processed meat (an average of more than nine grams a day or the equivalent of about 1 and a quarter hot dogs a week) had a 21 percent higher risk of breast cancer than those who ate no processed meat.

“It is not clear what component or components of processed meat are responsible for the association with cancer,” says Mason. Likely candidates under investigation include salt and known or suspected carcinogenic chemicals formed during processing and cooking.

Sodium: According to the American Cancer Society, there is good evidence that consuming large quantities of foods preserved by salting is associated with increased risk of stomach, nasopharyngeal, and throat cancers. “The link between excessive table salt (sodium chloride) and cancer risk (especially stomach cancer) is compelling,” says Mason. “People should try to limit their average intake of sodium to less than 2,300 milligrams per day.” Deli meats (like pre-packaged turkey and ham slices) are one of the main sources of sodium in the American diet. In fact, six thin slices (two ounces) of deli meat can contain as much as half of the daily recommended sodium intake. Even if all of this sodium does not raise cancer risk, it raises the risk of high blood pressure and heart disease in most people and should be limited none-the-less.

Nitrates: Sodium nitrite and sodium nitrate (which naturally converts to sodium nitrite) are used as preservatives in processed meats because they prevent bacterial growth. Nitrates are also found naturally in a number of foods, including celery, beets, arugula, and other vegetables. “It is common nowadays to find the statement ‘no added nitrates’ on processed meat products,” says Mason. “In most instances, these products are manufactured using celery juice or other natural sources of nitrates. To my knowledge, there is no evidence that the nitrates in celery juice act any differently in the body than nitrates added as food-grade chemicals. In fact, unlike food-grade sodium nitrate or nitrite, there is no federal regulation that limits how much celery juice can be added to a processed meat, so it is feasible to actually be consuming more nitrates with a processed meat that says, ‘no added nitrates’.” When consumed in vegetables, nitrates are safe, and may even have protective health effects such as improving blood flow. But in meats, nitrites can react during processing, cooking, and storage to form compounds called nitrosamines, which are classified as carcinogens. “Keep in mind, however, that the link between sodium nitrate and cancer risk is still unclear,” says Mason.

Cooking: There is not enough data to prove that the way meat is cooked affects cancer risk, but it is known that cooking meat (processed or unprocessed) at high temperatures or in direct contact with heat (such as grilling or pan-frying) produces more carcinogenic chemicals than lower-heat, indirect methods like roasting or stewing.

While the exact culprit behind the association between processed meats and cancer is unclear, the association itself is convincing, especially for colorectal cancer, and the added sodium in these products has other clear negative health impacts. Cutting back on these foods, even if they say, “no added nitrates,” is a smart move for health.

For reasons that are not yet fully understood, processed meat consumption increases risk of colorectal (bowel) cancer and is associated with other health problems.

-Eliminate or reduce intake of processed meats, including bacon, ham, sausage, hot dogs, and jerky, even if they say, no added nitrates.

-Reduce sodium (in processed foods and added in cooking or at the table) to less than 2,300 milligrams (the equivalent of about one teaspoon) a day.

-Cook meats by roasting, baking, microwaving, stewing, or braising, rather than grilling or frying.