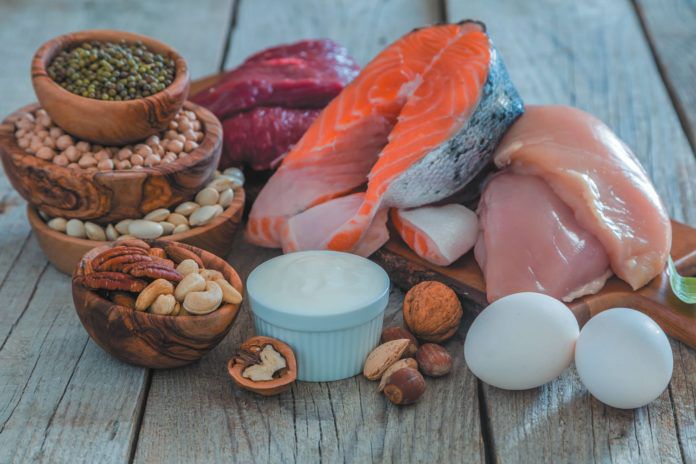 Protein is essential to good health. You need it to make hair, blood, enzymes and antibodies—and, of course, muscle. The problem: With aging we tend to gradually lose muscle size, strength and function—a relatively common condition called sarcopenia. It may seem like a no brainer to boost your dietary intake of protein to help prevent sarcopenia and the frailty and increased risk of falls it can lead to.

In fact, some experts have suggested that the National Academy of Science’s Recommended Dietary Allowance (RDA) for protein should be raised in older adults. Your RDA is 0.36 grams of protein for each pound of body weight. (For a rough estimate, divide your weight by 3.)

Now, a new randomized clinical trial in older men has failed to demonstrate that increased intake of protein, independent of changes in strength training, improves muscle mass, strength or power as well as overall daily functioning.

“If the RDA is, in fact, too low, you would have expected to see some sort of benefit in men at the higher level of protein intake,” says Roger A. Fielding, PhD, director of the HNRCA Nutrition, Exercise, Physiology and Sarcopenia Laboratory. “But that’s not what they found.”

Optimal Protein: The Optimizing Protein Intake in Older Men (OPTIMen) study involved 92 men 65 and older who had moderate muscle-related limitations such as slower walking speed. At the start of the study, they were all consuming less than or just the right amount of their protein requirements.

The participants maintained their usual level of physical activity, avoiding vigorous resistance and endurance exercise that could enhance muscle size or performance. That way, the trial could zero in on the effects of increased protein.

The men were provided with pre-packaged, precisely formulated meals for 6 months—the longest study of its kind to date. They were assigned randomly to eat meals containing the RDA for protein or meals with about 60% additional protein but the same number of calories.

Testosterone, Too: In parallel with the protein intervention, the trial also assessed the effects of the hormone testosterone. Testosterone, which revs up conversion of amino acids from dietary protein into muscle tissue, is under investigation as a way to treat sarcopenia. OPTIMen was designed in part to find out if extra protein can be used to enhance the effect of hormone treatment on muscle health.

The men were chosen at random to receive either a weekly injection of testosterone or a placebo. The testosterone injections significantly improved lean body mass—by nearly 8 pounds—but the amount of protein they took in made no difference.

“It does surprise me to some extent is that we did not see or measure an enhancement of the effects of the testosterone therapy when more amino acids were available to help build muscle mass,” says Wayne W. Campbell, PhD, a co-investigator on the OPTIMen study based at Purdue University’s Center on Aging and the Life Course.

What It Means for You: Campbell strongly cautions against interpreting this study as a sign that older men should pay less attention to their protein intake. “An encouraging outcome of this study is that consuming only the RDA for 6 months in these functionally limited older adults did not lead to losses in strength or function,” Campbell says. “That’s consistent with the notion that the RDAs are designed to be minimally acceptable and adequate.”

“It’s clear that there are a large number of older adults who simply don’t even meet the RDA for protein in their diet,” Fielding says. “I think there’s other evidence—although not from this study—suggesting that there are some benefits if you give those people supplemental protein. One study is not going to answer the entire question.”

While OPTIMen didn’t include women, who might respond differently to additional protein. What’s more, the study didn’t factor in exercise, and strength-building resistance training builds more muscle if you are taking in sufficient amounts of amino acids. “Physical activity should be encouraged so you improve your muscle function and are at lower risk of falls,” Campbell says.

Adds Fielding, “We’ve tried to look at the synergies between exercise and some nutritional interventions, and we’ve seen some effects, but the effects of exercise are so potent that they tend to overwhelm any impact of nutrition.”

-Substitute some high-quality proteins like eggs, lean meats and Greek yogurt for lower-quality calories from refined grains and sweets.

-Include strength-building resistance training at least twice a week in your exercise plan.

-Spread your protein intake out throughout the day rather than trying to meet all of your protein needs within a single meal.