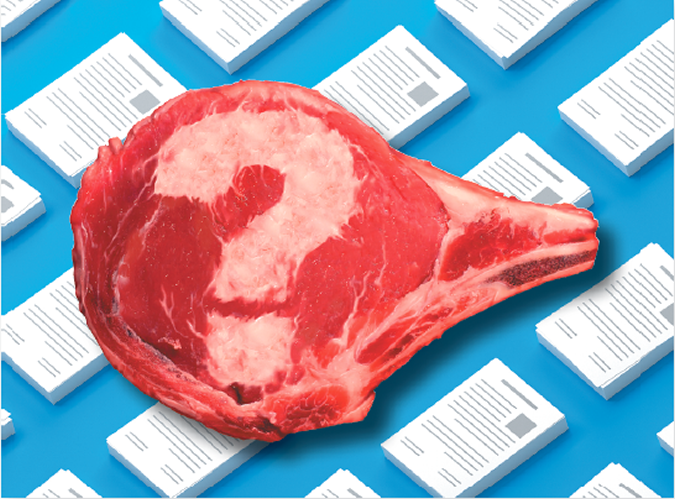 A collection of controversial research reviews on consumption of red meat and processed meat published recently in the Annals of Internal Medicine seemingly overturns years of public health guidelines and recommendations from a range of experts and organizations. It was met with resounding criticism from many nutrition experts. A close look at the findings can help you make informed choices for your own health.

The Controversy: The reviews, conducted by an independent group of scientists, concluded that adults should continue unprocessed red meat and processed meat consumption at current levels. The research (composed of three separate meta-analyses and two narrative reviews of existing studies on red meat and processed meat consumption) quickly led to media headlines with statements like, “meat is back!”

This conclusion is highly controversial because prior meta-analyses of long-term observational studies have consistently found that intake of processed meats (like bacon, sausage, hot dogs, ham, jerky, and deli meats) is linked to higher risk of colorectal cancer, stroke, heart disease, and type 2 diabetes. In these earlier studies, unprocessed red meats (beef, pork, and lamb) were not linked to any evidence for benefits, but were generally linked to less robust or consistent evidence of harms than processed meats, except for higher risk of type 2 diabetes at higher levels of intake. In 2015 the World Health Organization International Agency for Research on Cancer concluded that processed meat is carcinogenic to humans and that consumption of red meat is “probably” carcinogenic to humans. Similarly, the World Cancer Research Fund/American Institute for Cancer Research systematically reviewed the evidence and recommend limiting red meat consumption to moderate amounts and consuming very little processed meat.

What Did These New Reviews Find?

Unusual Methods and Decisions: Three unusual decisions caused the authors to dismiss their own evidence and recommend that people continue to eat meat.

1. The authors chose to grade the evidence of identified harms as ‘low quality.’ They selected a system to rate the strength of the evidence (called GRADE) that was mainly developed for evaluating clinical interventions like drug trials. “The GRADE system is not the right framework for judging evidence on many of the things we care most about, like health effects of smoking, exercise, obesity, air pollution, lead paint, or nutrition,” says Mozaffarian. “To judge these types of population effects, many other established evidence grading systems have been developed and refined over the years.”

2. The authors took the unprecedented step of publishing their own separate dietary ‘guidelines’ based on their research. Dietary guidelines are usually prepared by a group of nutrition scientists representing a wide range of domain expertise and convened by a major health advocacy organization or the federal government. This panel was self-selected by the researchers; only two of the 14 panelists were listed as “nutritional scientists;” and three of the 14 members voted against the guidelines. (The dissenting members believed that the evidence was too weak to recommend changing current guidance.) “This paper on new ‘dietary guidelines,’ by a self-selected panel with no links to any established national or international organization, increased public confusion and lent undeserved credibility to their conclusions,” says Mozaffarian.

A stated aim of the researchers that prepared this new paper is “to produce trustworthy nutritional guideline recommendations based on the values, attitudes and preferences of patients and community members.” Unlike other scientific recommendations, the authors factored in personal preference and willingness to change. “It is very unusual to develop dietary guidelines based on attitudes and preferences, rather than the scientific evidence,” says Alice H. Lichtenstein, DSc, director of the Cardiovascular Nutrition Lab at the Jean Mayer USDA Human Nutrition Research Center on Aging and executive editor of Tufts Health & Nutrition Letter. “People deserve to know what the predominance of scientific evidence actually demonstrates so they can decide for themselves if they want to change their dietary behaviors.”

3. The authors confused low-certainty of evidence for harm with proof of no harm. The researchers identified potential harms of meat consumption, but dismissed this evidence as having low or very low level of certainty. In cases like this, it could be reasonable to conclude that harms are suggested but more research is needed. Yet, the panel instead recommended that people continue current unprocessed red meat and processed meat consumption. “This is a scientific no-no,” says Mozaffarian. “Failure to prove harm in science does not prove that no harm exists. Even if they dismissed their own findings for harm as weak, at best no recommendations at all should have been made.”

Other criticisms have also been raised with the new research. For example, the conclusions of one of the five reviews was based on a single study that was not designed to test the relationship between consumption of red and processed meats and cardiovascular health and was rated as weak. “Basing a recommendation on a single study not designed to test the hypothesis is a very low bar,” says Lichtenstein. “It would have been more appropriate to state that on the basis of their review there was insufficient evidence to come to a conclusion about a relationship between red and processed meats and cardiovascular health.”

“These studies ignore their own criteria for inclusion of relevant research into their analyses, ignore usual methods for testing hypotheses about nutrition and health, and ignore the totality of evidence available on meat consumption generated by multiple avenues of research,” says Jeffrey B. Blumberg, PhD, professor at the Friedman School. Frank Sacks, MD, a professor of cardiovascular disease prevention at Harvard and past chair of the American Heart Association’s nutrition committee, called the research “fatally flawed.”

Balanced Recommendations: Mozaffarian wonders whether these new papers are in some way a reaction to trends in recent years to simplify the evidence for health harms of meat consumption. “‘Plant-based’ has become one new vogue for defining a healthy diet. In reality, both ‘plant-based’ and ‘animal-based’ foods represent diverse items that can be healthy, neutral, or harmful,” says Mozaffarian. [See April 2019, ‘Plant-Based’ and Unhealthy?] “For health, many ‘plant-based’ foods are harmful (French fries, soda, sugary cereals, processed energy bars, candy, white bread, white rice, crackers, etc.), while animal foods like poultry, eggs, and milk are largely neutral in terms of overall health impact; fish and yogurt are beneficial; cheese may be modestly beneficial; while unprocessed red meats at higher intakes and especially processed meats are clearly harmful. Yet, several recent reports and guidelines have put major emphasis on reducing meat consumption and shifting to ‘plant-based’ diets for health. It’s important for scientists, public health experts, and advocates to embrace the true nuances related to diet, including complexities related to ‘animal-based’ and ‘plant-based’ foods and health.”

The upshot: For those who choose to eat meat, unprocessed red meat should be eaten in moderation, while processed meat should be minimized. To reduce cancer risk, the American Institute for Cancer Research recommends eating no more than three servings per week (12 to 18 ounces total, cooked weight) of red meats like beef, pork, and lamb and avoiding processed meats such as ham, bacon, salami, hot dogs, and sausages.

Any time you see a lone new review that seems to contradict all prior research and well-established health advice, take it with a grain of salt. “Drawing strong conclusions from surprising results that are in contrast to all past findings is inappropriate, especially when these conclusions are attached to specific recommendations that may broadly and adversely affect public health,” says Blumberg.

If the new study on red and processed meat consumption has you confused, try these tips:

-Limit consumption of processed meats like hot dogs, sausage, bacon, ham, jerky, salami, pepperoni, and deli meats (including processed ham, chicken, and turkey). Don’t be fooled by ‘low-fat’ or ‘nitrate-free’—these meats are still highly processed and loaded with preservatives like sodium and nitrites (the latter often hidden as ‘celery juice’ in the ingredients list).

-If you eat red meat, limit consumption to no more than about three portions per week (up to 12 to 18 ounces, cooked, per week).

-Beware of single reviews that contradict years of scientific recommendations. Keep an open mind but wait for more information.