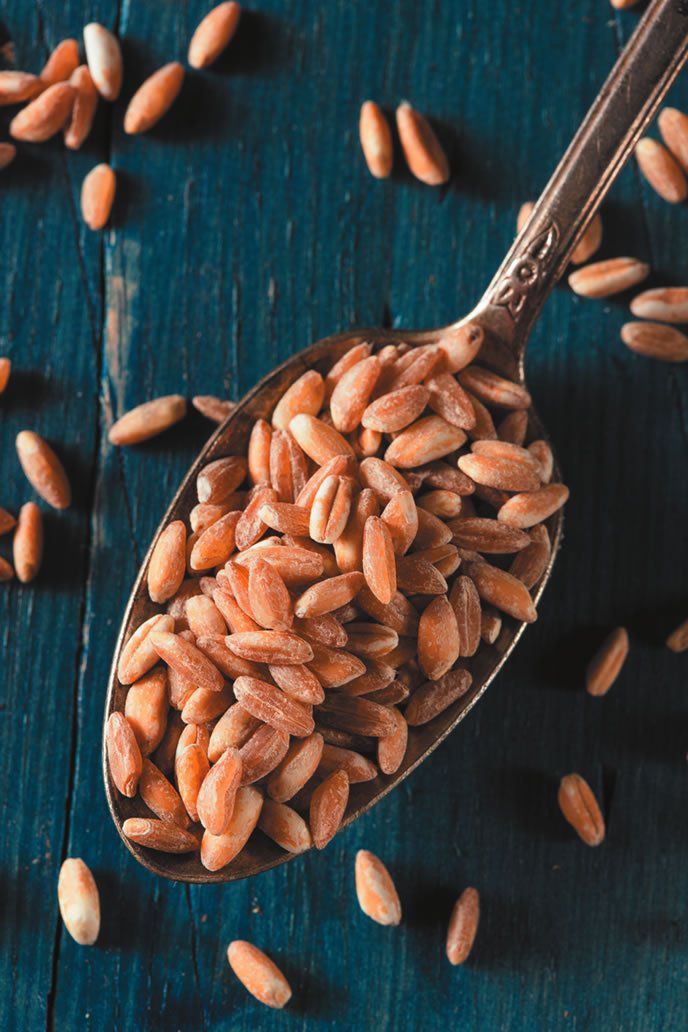 The ancient Roman legions knew something that modern chefs are only now rediscovering: Farro, a form of wheat that originated in the Middle East’s Fertile Crescent thousands of years ago, offers nutrition enough to march on with a nutty taste and pleasantly chewy texture. As chic restaurants around the country are demonstrating, farro is also versatile enough to substitute for rice and other more familiar grains in dishes ranging from risottos to salads, soups to breakfast bowls.

You’ll get the most nutrition by buying whole-grain farro. “Like other whole grains, whole-grain farro includes not only the inner endosperm but also the nutrient-rich outer bran and germ,” says Nicola M. McKeown, PhD, an associate professor at Tufts’ Friedman School and scientific adviser to the Whole Grains Council <wholegrainscouncil.org>. “To make sure you’re getting whole farro, avoid labels that say ‘pearled,’ which indicates that the outer bran has been removed. If you can’t find whole-grain farro, choose ‘semi-pearled’ (semiperalato in Italian), which contains some of the fiber- and nutrient-rich bran intact.”

ANCIENT GOODNESS: Farro is an example of an “ancient grain,” a popular culinary trend in its own right—ancient grains and farro both made the National Restaurant Association’s list of 100 foods that are “hot” in 2015. “In general, ‘ancient grains’ are those that have come down to us largely intact,” according to the Whole Grains Council. “Our ancestors ate grains in a similar form hundreds or even thousands of years ago. That’s as opposed to grains that have been extensively modified and cross-bred more recently.”

The popularity of ancient grains increased more than 50% in 2014 over the previous year. Quinoa, probably the best-known ancient grain, has even found its way into a new variety of Cheerios breakfast cereal, along with Kamut and spelt.

Also known as emmer wheat and the pharaoh’s wheat, farro was one of the first cereal grains ever domesticated. It served as part of the daily fare of the Roman legions. Over the centuries, however, farro was gradually abandoned in favor of durum wheat, which is easier to hull and higher-yielding.

But this ancient wheat continued to be popular in Italy, where the term “farro” originated and it has long been used in a risotto-like dish called farrotto. Unlike rice, farro never seems to get mushy and retains a slightly chewy texture similar to al dente pasta. It can also substitute for other grains ranging from bulgur wheat to pearly Israeli couscous (the larger kind).

FIBER AND MORE: As you might expect, farro is rich in fiber. Just a quarter-cup (uncooked) of whole-grain farro has 5-7 grams of fiber—about four times as much as a comparable amount of brown rice. (Semi-pearled farro has about 3 grams of fiber.) The complex carbohydrates in farro break down slowly, which helps steady your blood sugar. These carbs also contain cyanogenic glucosides, which have been found to stimulate the immune system and improve cholesterol levels.

Farro is packed with protein, too, with about 7 grams in a quarter cup (about a half-cup cooked). Although not gluten-free and thus unsuitable for patients with celiac disease, farro is lower in gluten than modern wheat varieties.

It’s a good source of niacin (vitamin B3), which helps the body metabolize protein, carbohydrates and fats, and of the minerals magnesium, iron and zinc. Tufts researchers have linked higher magnesium intake to benefits including reduced coronary-artery calcification and lower risk of progression from prediabetes to type 2 diabetes. Other research has shown that getting more magnesium might help you maintain mobility as you age.

PREP TIPS: Whole-grain farro takes about 30-40 minutes to cook, but you can cut that to about 10 minutes by pre-soaking overnight. Some chefs prefer to crack the whole grain, as needed, in a coffee grinder or blender; cracking makes farro cook faster while preserving all its whole-grain nutrition. Some serving ideas:

– Use in place of rice or barley in soup.

– Mix into hearty cold salads or combine with vegetables for a warm salad.

– Combine with nuts and a little goat cheese to stuff zucchini or bell peppers.

Store uncooked farro in a tightly sealed container in a cool, dry, dark location. Extra cooked farro will keep a few days in the refrigerator or a few weeks in the freezer, for easy reheating as a side dish where you might otherwise serve rice or couscous.

So-called ancient grains include several heirloom varieties of wheat in addition to farro, such as spelt, einkorn and Kamut. Gluten-free ancient grains include quinoa, amaranth, teff and millet. All are good sources of fiber and protein and in general contain minerals and B vitamins.Two cookbooks with recipes for ancient grains are Ancient Grains for Modern Meals and the newly published Simply Ancient Grains, both by Maria Speck and published by Random House. For a complete guide to cooking whole grains, see our February 2011 Special Supplement.If you cant find whole-grain varieties of farro or other ancient grains, check the mail-order sources listed at (whole-grains/mail-order-grain-sources).