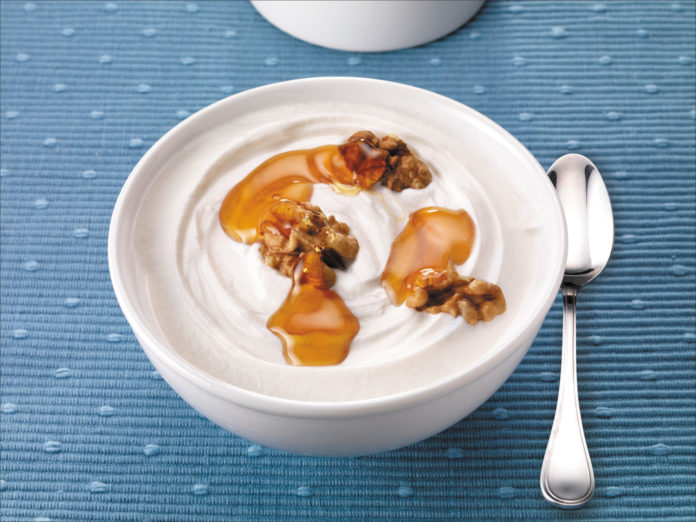 Besides the Seahawks and Broncos, viewers of this years Super Bowl saw two other fierce competitors: Greek yogurt brands, slugging it out in commercials. That would have been unthinkable only a few years ago-in 2008, Greek yogurt accounted for only 4% of US yogurt sales. But today Greek yogurt makes up 44% of the multibillion-dollar US yogurt market and is responsible for almost all the growth in this part of the grocery aisle. More than half of US households bought Greek yogurt last year, according to retail research firm IRI.

Despite the name, Greek yogurt isnt usually imported; the thicker style is simply what some Mediterranean peoples prefer. It starts out the same as regular yogurt, by adding bacteria (primarily Lactobacillus bulgaricus and Streptococcus thermophiles) to milk. To make it Greek, the yogurt is then strained to remove much of the liquid whey, leaving behind a thicker product.

NUTRITIONAL DIFFERENCES: That extra straining also affects Greek yogurts nutritional profile, according to Robert M. Russell, MD, emeritus professor at Tufts Friedman School. Since its more concentrated, Greek yogurt has more protein and saturated fat per ounce, but fewer carbohydrates since some of the carbs go out with the water, he explains.

A six-ounce serving of Greek yogurt typically contains 17 grams of protein, compared to about 6 to 8 grams in regular yogurt. Buying nonfat yogurt solves the problem of extra saturated fat. The naturally creamier, thicker texture of Greek yogurt makes it seem more luxurious, even without the fat.
The one negative about choosing Greek rather than conventional yogurt is that some calcium is also lost along with the whey and liquid. Amounts vary-check the Nutrition Facts label-but a typical plain nonfat yogurt supplies about 300 milligrams of calcium, versus only 150 milligrams for nonfat Greek yogurt. Calcium is expressed in percentages of the Daily Value (1,000 milligrams) on the Nutrition Facts panel, so 150 milligrams would be listed as 15%.

Like other yogurt, Greek yogurt is made from milk that has not yet been fortified with vitamin D, so its not automatically a source of this vitamin. Some brands, however, add vitamin D to yogurt of both types. Like calcium, vitamin D is labeled as a percentage of the Daily Value, which is 400 IU (a figure thats less than the Institute of Medicines recommendation of 600 IU for people under age 70, 800 IU for ages 70-plus).

FRIENDLY BACTERIA: Greek yogurt has the same probiotic benefits as its conventional kin, although Dr. Russell notes, Some types may differ in the probiotic used in them.

The friendly bacteria found in yogurt have been recently shown effective in preventing diarrhea associated with taking antibiotics, and other studies suggest benefits in shortening the duration of diarrhea. The jury is still out on other probiotic benefits, including preventing constipation and treating irritable bowel syndrome (IBS), ulcerative colitis, Crohns disease and bacterial vaginitis. More research is also needed to determine which strains of probiotics are most effective.

In the case of yogurt, the FDA has warned manufacturers against unapproved immune-system claims that suggest their probiotics fight the flu or common cold.

Look for words like active cultures or live cultures on the yogurt label, Dr. Russell advises, to make sure youre getting probiotic benefits. Live bacteria do different things metabolically in the intestines that dead bacteria simply cannot do-whether you prefer conventional yogurt or go Greek instead.