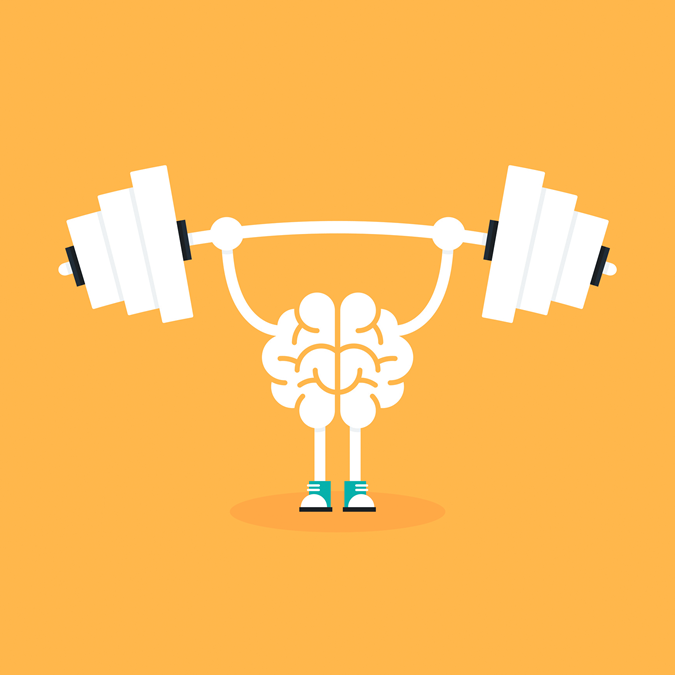 Our brains tend to shrink as we age, and this brain atrophy is associated with cognitive decline and dementia. Research suggests that being more physically active may slow mental decline, in addition to slowing physical decline.

Physical Fitness and the Brain: As we age, the body tends to lose muscle mass and strength. It’s no surprise that this muscle loss, called sarcopenia, is associated with decreased physical functioning, but a 2018 study in the journal Clinical Interventions in Aging found individuals with sarcopenia performed more poorly on cognitive tests than non-sarcopenic individuals.

Brain atrophy is a normal part of aging. “As we head into our 60s, brain atrophy starts accelerating,” says Nicole Spartano, PhD, a Tufts’ alum who is a research assistant professor at the Boston University School of Medicine. “The degree of acceleration is part of what we think of as brain aging and may eventually lead to cognitive decline and dementia.” A recent study led by Spartano and her colleagues found an association between higher levels of activity in mid and later life and a lower amount of brain shrinkage with age. This analysis of observational data from the Framingham Heart Study found that higher levels of physical activity were associated with larger brain volume. “Every additional hour of light intensity physical activity a day was associated with approximately one year less brain aging,” says Spartano.

A randomized controlled trial led by Roger A. Fielding, PhD, director of the Nutrition, Exercise Physiology, and Sarcopenia Laboratory at the Jean Mayer USDA Human Nutrition Research Center on Aging looked at physical activity and cognitive function over time. This 2017 analysis of the LIFE (Lifestyle Interventions and Independence for Elders) study conducted by Fielding and his colleagues found that a two year moderate-intensity physical activity program did not result in better cognitive function and/or lower risk of mild cognitive impairment or dementia compared to a health education program, except in participants 80 years or older and those with poorer baseline measures of physical performance. Of note, while the impact on cognitive health was not significant, Fielding’s study did find that even little bit of activity helps when it comes to preserving physical function and quality of life.

Keeping both brain and body active may be the key. A 2017 meta-analysis found that combined cognitive and physical training had a positive effect in patients with dementia and those with mild cognitive impairment.

Why it Might Help: “We don’t know exactly why physical activity is associated with decreased signs of brain aging and lower risk of cognitive decline,” says Spartano. “One strong possibility is that activity helps keep the arteries clear. Narrowing of the arteries leading to the brain may be associated with brain aging and dementia, so good cardiovascular health is good for brain health. Another proposed mechanism is the idea that physical activity increases spatial awareness, which might help support connections in the white matter of the brain.” Animal models strongly suggest that physical activity increases certain chemical factors in the brain, but it is difficult to study this possibility in humans.

What to Do: The possibility that being physically active helps slow brain aging is yet one more reason to get moving. Current physical activity guidelines recommend all Americans get at least 150 minutes a week of moderate intensity activity (such as walking briskly, mopping, pushing a lawn mower, or playing doubles tennis) along with strength training. But multiple studies have now demonstrated that any amount of activity is better than none, and any increase, no matter how small, matters. Set a goal to be more physically active tomorrow than you were today. Your body—and your brain—will thank you!

-Set a small goal for increasing your time spent being active. If you are generally inactive, start slow. If you are already active, increase the time you spend moving or the intensity of
your activity.
-Aim for 150 minutes (2.5 hours) a week moderate intensity physical activity, such as walking briskly, mopping, pushing a lawn mower, bicycling, or playing doubles tennis.
-Consider using a step counter (such as a simple pedometer or a fitness tracker) to track and encourage activity.