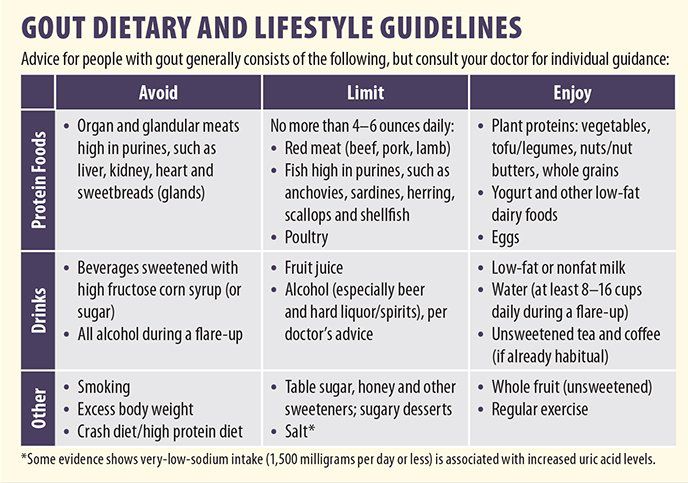 Gout is so painful that its sufferers say you can’t really grasp how bad it is unless you’ve experienced it. A form of arthritis, gout is marked by attacks of severe joint pain, swelling, warmth and redness. Although medication is often used to help manage gout, dietary changes may help, too.

“Gout used to be called ‘the rich man’s disease’ because it was linked to the rich food and drinks only the wealthy could afford,” says Steven C. Vlad, MD, PhD, a rheumatologist and assistant professor at Tufts University School of Medicine. “Today, with high rates of obesity, gout is much more prevalent.” Although gout strikes middle-age to older men and postmenopausal women more often, obese people tend to develop gout at a younger age.

Even so, Vlad says some people who develop gout are at a healthy weight. Other factors, such as heredity, use of certain medications (particularly some diuretics for high blood pressure) and the presence of other diseases, such as kidney disease or congestive heart failure, affect gout risk, too.

What Happens in Gout:

“Uric acid is what forms the painful crystals that cause gout attacks,” Vlad says. “We all have a certain amount of uric acid in our blood, but if the levels get high enough, crystals start to deposit in joints. The body tries to get rid of the crystals in the same way it fights an infection. That creates a large amount of inflammation.”

Your body produces uric acid in the normal process of breaking down the genetic material in your body’s cells when they’re replaced. More uric acid also is produced when you consume certain foods and drinks. Your kidneys help filter out uric acid, but they can’t always keep up.

A mainstay of dietary management of gout is watching what you eat to help reduce uric acid levels. “Purines, found in high amounts in certain animal foods like meat and seafood, are converted to uric acid in the body,” Vlad says.

Alcoholic beverages and regular soda also increase the body’s production of uric acid. Why this happens with alcoholic beverages is uncertain. As for soda, the high fructose corn syrup (or regular sugar, which is very similar in composition) is likely to blame, due to how fructose is metabolized in the body, which can lead to overproduction of uric acid. Similar associations haven’t been found for artificially-sweetened diet soda.

Higher intake of low-fat milk and other dairy products has been associated with decreased blood uric acid levels. Certain components of milk have uric acid-lowering and anti-inflammatory effects.

“Many of the dietary approaches suggested for gout – like the emphasis on eating vegetables, fruits and low-fat dairy products while reducing intake of fatty red meats and sugar – are captured by the DASH (Dietary Approaches to Stop Hypertension) diet,” says Stephen Juraschek, MD, PhD, at the Johns Hopkins University School of Medicine. His team used data from a subset of 103 people (not on blood pressure medication) from the DASH-sodium trial to find out if the diet might help lower uric acid levels.

Compared to a typical American diet, the DASH diet lowered average blood uric acid levels by 0.5 mg/dL within 30 days on the diet, which was maintained at the 90-day mark. In a subset of people who had uric acid levels at or above 7 mg/dL at the start of the study, uric acid levels decreased by 1.3 mg/dL. “That starts to approach the effect we see with medications for lowering uric acid, such as allopurinol, which lowers uric acid by 2 to 3 mg/dL,” Juraschek says. The research appears in Clinical Rheumatology. Further study of the DASH diet in gout is needed.

If you have gout attacks, follow the standard diet advice, below. Doing that as part of a nutritious eating pattern (such as DASH) supports overall health, too.

To learn more: The American Journal of Medicine, November 2016–

Gout more commonly affects the big toe, ankle, knee, wrist or elbow. Some say it feels like shards of broken glass are in your joints. This is actually the uric acid crystals.