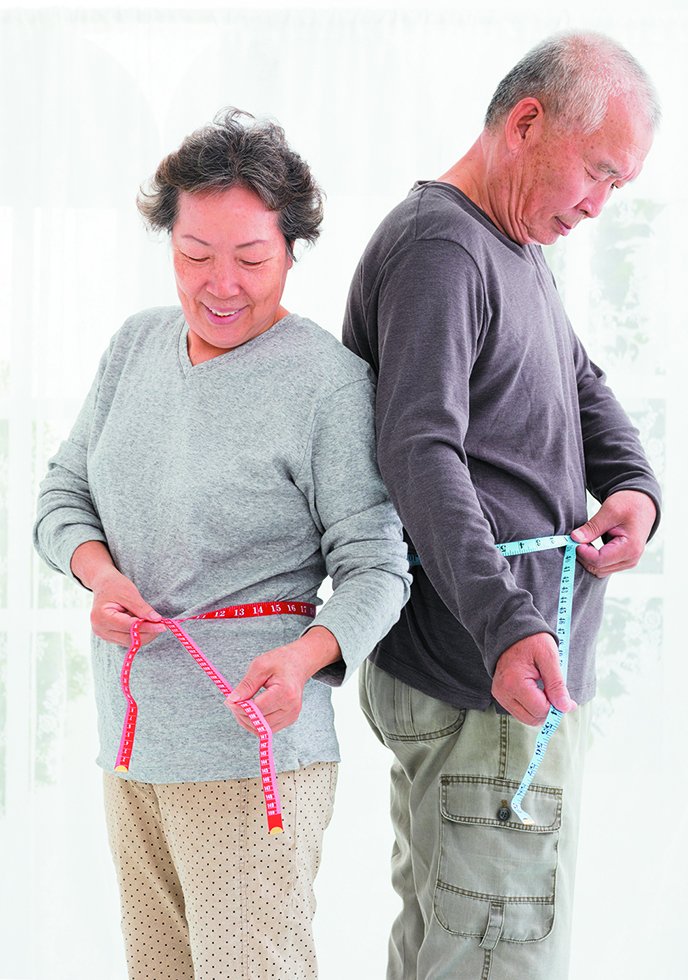 You may begrudge belly fat because it makes it tougher to fit into your clothes, but a bigger reason to whittle your waistline is for your health. The belly fat you can pinch, which sits just below your skin, is called subcutaneous fat. The bigger health risk is thought to come from visceral abdominal fat, which is found deeper within your abdomen. Visceral fat, sometimes referred to as belly fat, frequently increases in both women and men as they age, but your exercise level, types of foods you eat and energy balance each may also play a major role.

Until about a decade ago, experts thought body fat was just a storage place for energy. Now they know visceral fat cells also are busy producing inflammatory molecules and other substances that can interfere with the action of insulin, a hormone involved in blood sugar control and fat storage.

“Greater amounts of visceral abdominal fat are correlated with metabolic issues such as insulin resistance and alterations in blood fats [triglycerides and cholesterol],” says Andrew Greenberg, MD, director of the Obesity and Metabolism Laboratory at Tufts Human Nutrition Research Center on Aging (HNRCA). “What’s unclear is which comes first – increased visceral abdominal fat or a change in your body’s metabolic health that promotes belly fat.”

The Path to Belly Fat:

“One of the earliest associated factors and perhaps a driver of visceral abdominal fat is excess fat synthesis and accumulation in the liver,” says Dariush Mozaffarian, MD, DrPH, dean of Tufts’ Friedman School. This is referred to as fatty liver and is promoted by consuming more calories than you need, often associated with a high intake of simple sugars, refined carbohydrate, trans fat and alcohol, he explains. On the other hand, intake of polyunsaturated fats, such as in fatty fish (for example, salmon and sardines) and canola, corn, soybean and peanut oils, if consumed as part of a calorie-controlled eating plan, appear protective against fatty liver.

Fatty liver disease is associated with obesity, high triglycerides, insulin resistance, prediabetes and type 2 diabetes. If you have one of these metabolic conditions, addressing excess visceral fat with gradual weight loss coupled with a healthy eating pattern and regular exercise are smart moves. Beware of rapid weight loss or fad diets, which often lead to losses of not only belly fat but also lean muscle. If you’re currently at a healthy weight, try to avoid gaining excess weight, which is the best way to avoid metabolic diseases. Several studies have examined dietary aspects that may be most helpful, as summarized next.

In a study recently published in Nutrition, Metabolism & Cardiovascular Diseases, researchers evaluated associations between the degree of adherence to a Mediterranean-type diet and the storage of body fat. They examined dietary and body composition data from 5,079 participants of the Multi-Ethnic Study of Atherosclerosis (MESA) in the U.S.

Closer adherence to a Mediterranean-style diet and intake of more unsaturated fat (from various vegetable oils) in proportion to saturated fat was associated with a smaller amount of visceral abdominal fat (but not less subcutaneous fat) and less fat in the liver.

Additionally, data from a large, long-term trial called PREDIMED, conducted in Spain, showed that in a population habitually consuming a Mediterranean diet that included extra-virgin olive oil or nuts, there was less increase in waist size (reflective of visceral fat) over a 5-year period compared to a low-fat diet.

“A number of observational studies have found that people who consume more whole grains (2 to 3 servings per day) have smaller waist circumferences compared to those who eat little or no whole grains daily,” says Nicola McKeown, PhD, an associate professor at Tufts’ Friedman School. “In our research we found that visceral fat was 10% lower in individuals who ate approximately 3 or more servings of whole grains per day compared with those who essentially ate no whole grains.” Research suggests the association between whole grain intake and lower visceral fat may be diminished when people eat a high amount of refined grains, such as white bread. “It’s key to substitute whole grains for refined grains rather than simply adding whole grains to your diet,” McKeown says.

Beverages sweetened with sugar are a major contributor to added sugar intake in the U.S. diet. “In our research we’ve observed that people who drank sugar-sweetened beverages daily had almost a 30% greater increase in visceral abdominal fat over a six-year period compared with those who didn’t drink sugary beverages,” McKeown says. She suggests alternatives such as water, tea or coffee without added sugar.

Advice to follow a healthy eating pattern that limits sugar and refined grains while controlling calorie intake may not sound glamorous. But when combined with regular exercise, it can help put you on the path to a trimmer belly and reduced risk of developing heart disease, prediabetes and type 2 diabetes.

Give yourself a belly fat checkup. To do this:

1. Wrap a tape measure around your abdomen just above your hip bones so its parallel to the floor; pull the tape so its snug without pushing into your skin.

2. Breathe normally. After breathing out, check the measurement. To reduce risk of developing prediabetes, type 2 diabetes, heart disease and high blood pressure, waist circumference should be: