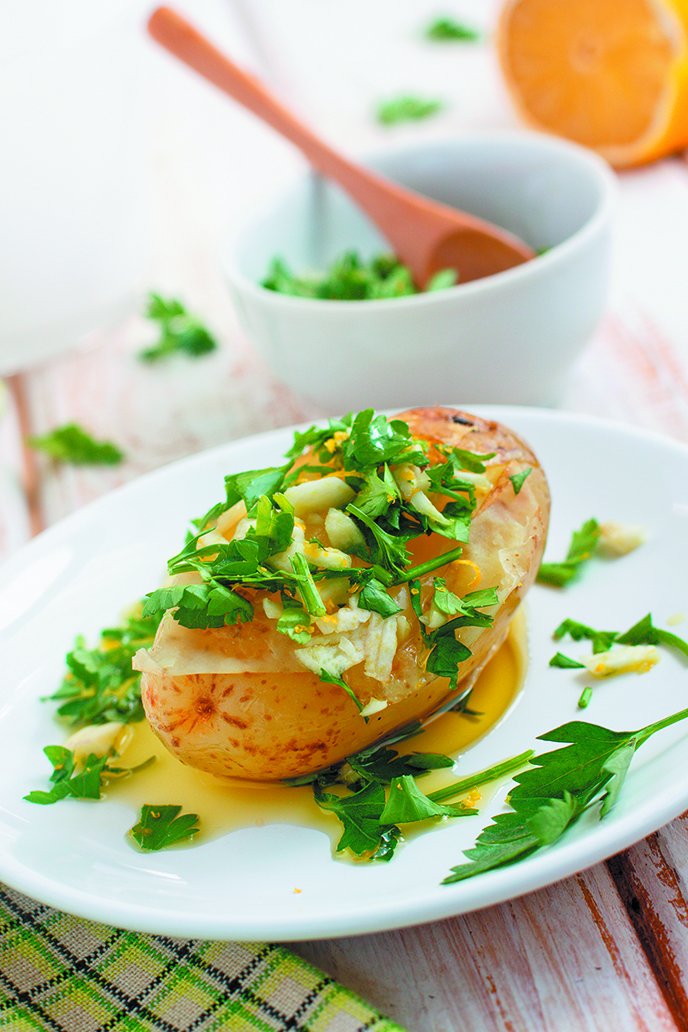 There’s a lot to like about spuds. They’re super-versatile, satisfying, affordable, and store well. Yet, there’s concern this dietary staple may be bad for your blood sugar, heart and weight. Potatoes are often consumed in not-so-healthy forms, too, such as salty French fries or baked potatoes smothered in butter, sour cream and cheese. Whether you prefer classic Russets, creamy red-skinned potatoes or yellow-tinged Yukon Golds (all considered “white” potatoes), their impact on health is important to consider since we eat more potatoes per capita than any other vegetable.

“We’ve had a handful of observational studies that suggest consuming potatoes may increase your risk for certain conditions, such as obesity, type 2 diabetes and cardiovascular disease,” says Diane McKay, PhD, an assistant professor at Tufts’ Friedman School and a scientist in its HNRCA Antioxidants Research Laboratory. “However, these studies don’t always account for how the potatoes were prepared, such as whether the people were eating French fries or a plain baked potato with the skin on.” Here’s a closer look at what we know about potatoes and health.

Potatoes are a good source of several vitamins and minerals, plus provide phytochemicals and fiber (especially with the skin on).

One concern about potatoes is their relatively higher amount of quickly digested carbohydrate (starch). “Starchy vegetables, including potatoes, tend to increase blood sugar more than non-starchy vegetables, such as green beans and broccoli,” McKay says. “That doesn’t mean a person with diabetes can’t eat potatoes, but it does make sense to eat them less frequently and in smaller amounts.” Additionally, you may blunt potatoes’ blood sugar impact if you top them with healthy fat, such as olive oil, and eat them as part of a balanced meal with some lean protein, such as a grilled chicken breast.

Passing up fries appears prudent. In a recent systematic review of observational studies on potatoes and disease risk, which was published in the American Journal of Clinical Nutrition, Denmark scientists found mixed results. Whereas two studies showed an association between higher potato intake and increased type 2 diabetes risk, five other studies didn’t. Results were clearer for fries: All three studies that tracked intake of French fries showed they were associated with increased diabetes risk.

French fries also may be the biggest culprit in associations between potatoes and obesity. In the Denmark scientists’ review, only two out of four studies showed a link between higher potato intake and increased obesity risk. However, when they focused on French fries, all three studies that tracked this found they increased obesity risk. What these studies could not determine is whether it was the fries themselves that increased health risks or the fries were simply a marker for a less healthy dietary pattern and lifestyle.

Connections Between Potatoes and Heart Health

You might think potatoes would be good for your heart since they’re high in potassium, a mineral that many people fall short on and that is related to blood pressure control. In fact, our ability to absorb and utilize potassium from potatoes was recently found to be very good. However, there are no data to suggest potatoes reduce blood pressure or decrease hypertension risk.

At the very least, fresh potatoes (such as boiled or baked) haven’t been associated with increased risk of heart attack, heart failure or stroke when eaten up to once per day. That was the finding of a new Swedish observational study in the American Journal of Clinical Nutrition, which followed 69,313 men and women for 13 years and assessed potato intake with a validated food questionnaire. Potato intake was only measured at the study start, however, so the possibility that eating habits changed over time cannot be ruled out.

For the time-being, it seems wise to skip French fries and eat a wide variety of colorful vegetables rather than over-doing white potatoes. When you eat potatoes, bake, roast or boil (and mash) them, use herbs and spices for added flavor and keep portion sizes in check (such as a few small potatoes or half of a large potato). Additionally, “when cooking potatoes, keep the skin on whenever possible, which is where most of the fiber and several minerals are concentrated,” McKay says. “Dirty (unpeeled) mashed potatoes with nonfat milk and roasted garlic, anyone?”