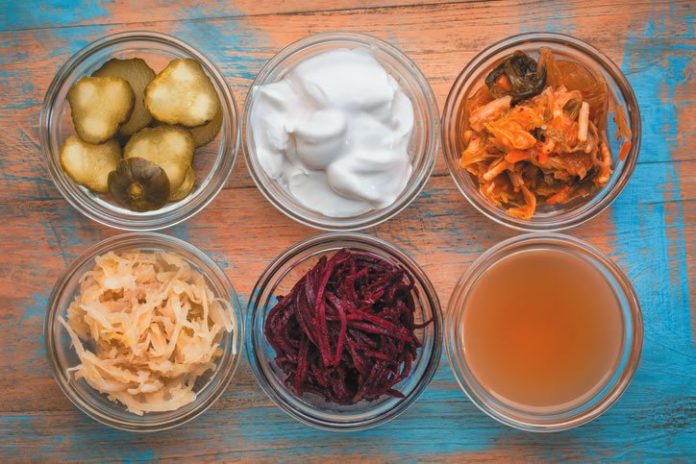 Fermented foods may be the oldest “new” food trend around. The process is as old as civilization itself, and fermented foods are consumed in nearly every culture in the world. While researchers attempt to tease out how the changes caused by fermentation actually impact health, many not-fully-substantiated health claims are being made. Let’s take a look at what we know, and don’t know, about these promising (and tasty) foods.

What is Fermentation? Fermentation occurs when microorganisms (certain species of bacteria, yeast, or mold) feed on starch, sugar, and other food components. This ancient process was originally used for preserving foods, but it fell out of favor in the age of refrigeration and pasteurization. Many foods and beverages that are commonplace in the U.S. are a result of fermentation. Grains are fermented to make beer and bread; wine is made by fermenting grape juice; and yogurt and cheese are popular forms of fermented milk. Any foods can be fermented, and there are many examples of fermented foods around the world, such as Korean kimchi and the Swedish fermented fish Surstrmming.

Behind the Health Benefit Claims. “It is becoming increasingly clear that the fermentation process changes the health-promoting characteristics of foods,” says Jeffrey B. Blumberg, PhD, professor emeritus at Tufts’ Friedman School of Nutrition Science and Policy. For example, large studies have suggested an association between consumption of fermented dairy foods and weight maintenance that is not seen with unfermented dairy products, and frequent yogurt consumption is associated with lower risk of type 2 diabetes, cardiovascular disease, and overall mortality. Some data show kimchi, a fermented cabbage dish ubiquitous in Korean cooking, is associated with anti-diabetic and anti-obesity benefits not seen with unfermented cabbage. Some of these suspected health benefits may result from the presence of the microorganisms themselves, but emerging research indicates that changes those organisms make to the food constituents, and new constituents they create, might have health benefits in their own right.

Some of the potentially health-promoting effects of fermentation include:

Adding to our gut microbiota. Probiotics are live bacteria that some evidence indicates can confer health benefits when consumed in adequate numbers. Some bacteria used in fermentation are known probiotics (or are similar to probiotic species). If fermented foods and beverages contain live microorganisms when consumed, a relatively large number of these organisms apparently make it through the human digestive system alive. “During the last decade, the number of studies has exploded regarding gut microbiota and their impact on the health of not only the gut but also the brain, heart, and immune system,” says Blumberg.

Changing existing compounds. In fermentation, the microorganisms break down food constituents. This process may have health benefits. For example, in fermented vegetables certain bacteria help convert health-promoting flavonoids into a more readily-absorbed form. In dairy products, the bacteria break down lactose, making yogurt and cheese easier for lactose-intolerant people to digest.

Creating new compounds. Fermentation may create new compounds that have health-promoting actions in the body. For example, one common result of bacterial fermentation is lactic acid (lactate), which recent research indicates is involved in anti-inflammatory and possibly antioxidant processes. Other strains of microorganisms actually synthesize B vitamins or vitamin K; discourage “bad” bacteria from taking hold in the gut; or produce molecules not found in the original form of the food that play a variety of potentially health-promoting roles in the body.

Deactivating undesirable compounds. In addition to creating (mostly) desirable compounds in foods, fermentation can also remove undesirable compounds. In some plant foods, so-called anti-nutrients like phytic acid bind to nutrients like iron and calcium, decreasing the amount of these nutrients available to be absorbed by the body. Fermentation can reduce phytic acid levels, which frees up more nutrients for absorption. Additionally, some food components are typically fermented in the gut by gut bacteria. This can create gas and trigger digestive problems. Fermenting foods before consumption leaves less work for gut microbes, and may help ease digestive problems such as irritable bowel syndrome.

So far, there is not a lot of clinical data backing up the potential health benefits discussed above, or the health claims often attributed to fermented foods. But tasty foods like yogurt, hard cheese, the fermented yogurt drink kefir, cabbage-based sauerkraut and kimchi, or the increasingly popular fermented tea kombucha are delicious ways to add nutritional variety to your overall dietary pattern.

For a change of pace, try including these fermented food products as part of a healthy dietary pattern:

-Yogurt: Yogurt is the result of bacterial fermentation of milk. For probiotic benefits, look for yogurts with live, active cultures. Watch out for high levels of added sugars.
-Kefir: This slightly tangy, yogurt-like drink is fermented with both bacteria (like yogurt) and yeast.
-Cheese: Some studies show potential positive health effects of diets that include some cheese, possibly due to the fact that cheese is fermented. While evidence is limited on type, hard and aged cheeses tend to be more fermented.
-Kombucha: Black tea and sugar fermented by bacteria and yeast, this drink is growing in availability and popularity in the U.S.
-Sauerkraut*: Fresh sauerkraut contains live cultures.
-Kimchi*: This spicy Korean dish of fermented cabbage has been made for centuries. (See Recipe below.)
-Miso*: This fermented soybean paste is commonly used in Japanese cooking, particularly in miso soup.
-Tempeh: This cake of fermented soybeans can be used as a meat substitute.

*These foods contain high levels of sodium and should be eaten in small quantities.