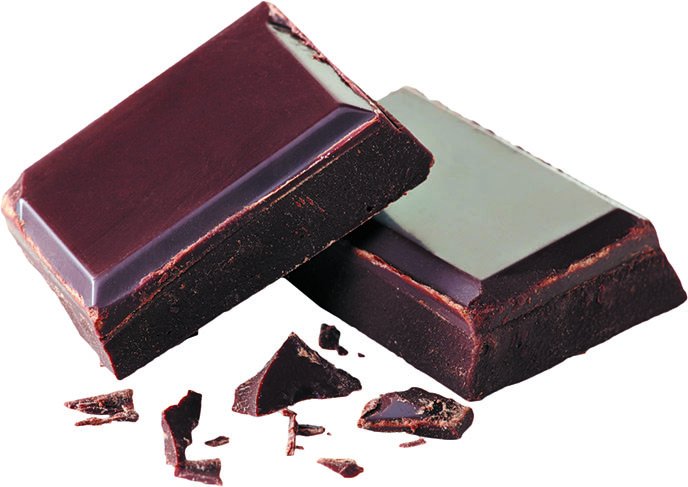 Chocolate lovers are turning their candy wrappers into celebratory confetti over recent headlines (“The More Chocolate, the Better”) linking chocolate consumption to lower risk of cardiovascular disease and stroke. While previous studies have suggested the flavonoid compounds in dark chocolate might have heart benefits, the findings also associated milk-chocolate consumption with reduced risk.

CHOCOLATE CHOICES: In the new study, published in Heart, scientists looked at data on 20,951 participants in the EPIC-Norfolk study who completed food questionnaires, including chocolate consumption. The responses were then compared to health outcomes more than 11 years later. Participants in the highest one-fifth of chocolate consumption—15 to 100 grams (0.5 to 3.5 ounces) a day—were at 11% less risk of heart disease and 25% less likely to die of cardiovascular causes than those eating the least. Compared to non-chocolate lovers, the biggest chocoholics were also at 23% lower risk of stroke.

The average daily chocolate consumption in the highest-intake group was 47.5 grams (1.7 ounces)—about the size of a standard chocolate bar, or two and a half chocolate truffles, containing about 270 calories. Though participants more frequently consumed the milk chocolate favored in Britain, the association with reduced risk was seen regardless of type of chocolate. That result, researchers speculated, may indicate benefits from compounds in chocolate in addition to flavonoids, possibly related to the calcium and fatty acids in the milk added to make milk chocolate.

People reporting the lowest chocolate consumption were older, had a higher BMI and waist circumference, and were more likely to have diabetes.

Overall, the researchers were more cautious in their interpretations than most of the media coverage of their findings. Chun Shing Kwok, of the University of Aberdeen, and colleagues concluded only: “There does not appear to be evidence that chocolate should be avoided in terms of impact on cardiovascular risk.”

NO RX FOR CANDY: But why shouldn’t this large, well-designed study be interpreted, as some headlines saw it, as a prescription to eat chocolate to prevent heart disease? The researchers themselves noted several caveats:

– Association does not prove causation. Although many important breakthroughs in nutrition science have begun with observational studies, such research is not designed to prove cause and effect. The scientists did not randomly assign one group of people to consume chocolate and then compare their outcomes to a control group.

– Food questionnaires may be unreliable, since they depend on individual recall. Moreover, participants were asked about chocolate consumption only once; if they increased or decreased intake in subsequent years, the study did not reflect that.

– “Reverse causation” might also explain such results. That is, people at greater cardiovascular risk might eat less chocolate (or under-report their consumption), while healthier people feel free to consume more.

Nonetheless, Tufts’ Blumberg notes that the findings are supported by the consistency of the results from other observational studies, including a meta-analysis conducted by the same scientists.

GO DARK: It’s also worth keeping in mind that chocolate contains calories. So if you love chocolate, it’s probably fine to eat some even every day—but choose chocolate instead of other caloric snacks or treats. Substitute that chocolate bar for chips, bakery goods or other indulgences high in calories, sugar and saturated fat, rather than adding it to your daily diet.

Despite the new findings, moreover, it’s still probably best to choose dark chocolate that’s higher in the flavonoids associated with not only heart but also possible brain benefits. Tufts’ Blumberg notes that the FDA does not require producers to list the flavonoid content, and recent lawsuits have led some to actually delete such data. He adds, “There is no reference standard (RDA or DV) for flavonoids, so no product can claim to be a ‘good’ or ‘rich’ source of them.”

To maximize the flavonoids in your chocolate, he recommends choosing dark, bittersweet or baking chocolate, rather than milk chocolate, which is alkalinized (“dutched”) to make it smoother and less bitter, but which also decreases its natural flavonoid content.

Whats in That Chocolate Bar?

Candy makers are not required to list the flavonoid content in their chocolate products, but you can learn other important nutrient numbers from the Nutrition Facts panel. Here are typical statistics for a mildly sweet dark-chocolate bar (1.45 ounces):